Former Japanese Prime Minister Shinzo Abe has died just hours after suffering an attack while giving an election rally in the southern city of Nara. The president received two shots at the hands of an attendee to the act carried out with a homemade weapon, which caused heavy bleeding and extremely serious injuries. He went into cardiopulmonary arrest during his transfer to the hospital. Despite the efforts of the doctors to try to save his life, the former Japanese leader has not been able to overcome his critical situation and has died shortly before noon. The attack has caused a commotion in the international community. Apart from the very characteristics of the events in a country with low crime rates and where political violence hardly exists, Abe had wide recognition among the rulers of other countries.

Police attribute the crime to a 41-year-old man identified as Yamagami Tetsuya, a member of the Maritime Self-Defense Force, the naval branch of the Japanese Army, between 2002 and 2005 and who is now unemployed. Although at first various witnesses indicated that he was captured while fleeing the scene of the crime, police sources have assured that Tetsuya did not apparently make any attempt to escape, but rather placed the weapon on the ground and waited to be arrested. After a first interrogation, the investigators consider that the suspect “did not act out of spite towards the ideology” of the political veteran.

“Former Prime Minister Abe was shot in Nara. A man, believed to be the attacker, is in custody,” Chief of Staff Hirokazu Matsuno told reporters. From the first minutes, the Japanese awaited a fatal outcome of this coup against one of the most popular politicians in the country. Television footage showed the former prime minister lying unconscious on the ground and bleeding profusely from his neck and chest. Quickly transferred in a medical helicopter to a hospital in the nearby city of Kashihara, Abe was admitted with practically no vital signs after suffering irreversible cardiopulmonary arrest. The medical part of the hospital indicates that the former Japanese leader had “gunshot wounds at two points in the neck” and serious damage to “large vessels” and the heart. His wife arrived shortly after at the health center, where government officials and the Liberal Democratic Party have been concentrated throughout this morning, visibly shaken. Since the 1960s, Japan has recorded eight attacks against politicians, who were killed or seriously injured by radicals or deranged individuals. The first reconstruction indicates that the shots against Abe were fired from behind and at least one of the projectiles would have hit him in the neck.

Everything happened around 9:00 p.m. (around four in the morning in Spain). Abe, who left office in September 2020 for health reasons, was participating in a Liberal Democratic Party election rally at a street intersection near the train station surrounded by a large group of supporters. He was holding a rally prior to elections for the upper legislative chamber scheduled for Sunday. There was security, but citizens could easily approach him. Japan has a low crime rate and gunfights are minimal. However, the National Police Agency has opened an investigation because it considers “it is necessary to confirm exactly what type of security system was in place and if it was sufficient.” In addition to officers from Nara Prefecture, the rally was under the supervision of a coordinator from the Metropolitan Police Department and a crowd control device had been installed.

But none of that prevented Yamagami from approaching him from behind with a homemade shotgun. The images transmitted by the NHK chain show the former head of government standing speaking with a microphone in his hand. According to witnesses, then two shots are fired. “The first one sounded like a toy. He (Abe) didn’t go down, but then there was a loud bang. The second shot was more visible, you could see the explosion and the smoke, “said one of the attendees at the rally. The former prime minister collapsed to the ground. “I saw that the blood flowed from his chest,” says a journalist in the digital edition of ‘Asahi Sinbum’, which confirms how the “sound of a shot was heard behind Mr. Abe. The buzz spread through the audience, and before I knew it, the man standing behind the former prime minister was holding something resembling a gun. The explosive sound was heard again.

The confusion has been instant. Dozens of rally attendees have run out in search of shelter, while others have been “paralyzed” on the street while the police and security services captured the alleged criminal. This one, who wore gray clothes, glasses and wore a mask, has not offered resistance. On the ground, the agents have seized a homemade shotgun made with two cut tubes and wrapped in black tape, as can be seen in the images, which would be due to a single reason: it is not easy to have a weapon in Japan.

The legislation is extremely strict and prohibits their possession except in the case of compressed air guns. The number of armories to obtain them is restricted to three in each of the forty prefectures of the country and all their material is subject to the control of the authorities. Handguns are not for sale and customers must turn in used or expired cartridges before purchasing new ones. The process to obtain the permit is long. You have to pass a training course, shooting tests, a mental health test and an investigation where family members and co-workers are even questioned. Every three years the license expires and this whole process starts all over again. 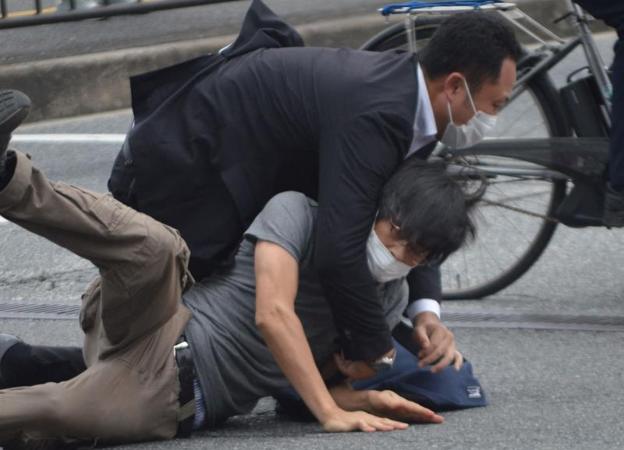 Time of the suspect’s arrest. / AFP

“Whatever the reason, a barbaric act like this cannot be tolerated and we strongly condemn it.” This has been expressed by the chief of staff of the Japanese Government, whose prime minister, Fumio Kishida, Abe’s rank mate, has rushed to the hospital. “Terror and violence can never be tolerated,” said the ruler’s adviser, Gen Nakatani. The Japanese government plans to offer a press conference throughout the day and has announced that it will form a working group to investigate the attack. A crisis cabinet has also been launched to analyze the next political steps, since it is practically the eve of the parliamentary elections. All the parties have suspended their acts.

US Secretary of State Antony Blinken was the first international leader to respond to the attack. “This is a very, very sad moment,” he told reporters covering the G20 meeting in Bali, before adding that the United States, of which the former prime minister was an ally, “is “deeply dismayed.” Former President Donald Trump has also confessed “devastated. Abe was a true friend of mine and, more importantly, of America. This is a tremendous blow to the wonderful people of Japan.” Other international leaders have already conveyed their “condolences” to Abe’s wife, Akie, and the Japanese government. New Zealand Prime Minister Jacinda Ardern has been “deeply shocked. She was one of the first leaders I met formally when I became Prime Minister. She was deeply committed to her role, and she was also generous and kind. I remember him asking me about the recent loss of our pet when I met him, a small gesture but it speaks to the kind of person he is.”

Shinzo Abe, 67, a political science graduate, was Japan’s longest-serving prime minister and the first born after World War II. He belonged to a family with deep political roots. One of his grandfathers, Nobusuke Kishi, was already prime minister between 1957 and 1960. Four years later, his great-uncle Eisuke Sato held the same position until 1972. He received the Nobel Peace Prize.

Abe was prime minister twice. The first between the months of September 2006 and 2007. He resigned and the next day he was admitted to a hospital for a gastrointestinal ailment aggravated by exhaustion. In 2014 he ran for election again and won by a majority. He was a hard-line conservative who promoted the revision of the Constitution and the first to visit Pearl Harbor in the company of an American president in 2016. He resigned from the Government again in 2020 to continue treating his intestinal illness, but since then he has maintained an intense political activity in the Liberal Democratic Party.

Tomoko Yoshino, president of the Japan Confederation of Trade Unions, has expressed concern that “violence during the election period is a serious challenge to parliamentary democracy and cannot be condoned for any reason. There are many political problems, but the solution must be based on sincere political debate at all levels of society, including Parliament, and the arbitration of the people by choice. The governor of Shizuoka, Heita Kawakatsu, has also shown his sadness at the attack and pointed out that it is an attack not only directed at the person but “kills a speech, and I cannot forgive either of them”.

How to find elevations on Google Maps?

Fri Jul 8 , 2022
From time to time, you may come across different natural elevations of the terrain, which could alter your excursion plans, so it is better to find out about their presence in front of you as soon as possibleMaps, the Google service, allows us to discover these formations in advance, and […]