“Nobody has gotten to the bottom” of the attacks on the Twin Towers, he says before the families of the victims who ask him to cancel a golf tournament financed by Saudi Arabia

Former United States President Donald Trump has once again unleashed the scandal by casting doubt on the investigation of the attacks of September 11, 2001, in which 3,000 people died and another 25,000 were injured. “Unfortunately, no one has gotten to the bottom of 9/11,” the Republican tycoon said in response to calls from dozens of relatives of victims of the attacks to cancel a golf tournament at his New Jersey club financed by Saudi Arabia. On the contrary, Trump has highlighted the friendship that unites him with the sponsors and has added that “there are great people here and we are going to have a good time.” His statements, made to a media outlet, have angered those affected, who are planning to demonstrate before his club this Friday.

The suspicions of the relatives have always been present in the investigations of the terrorist attacks against the Twin Towers and gained more force when the FBI declassified last year a report that revealed the existence of a relationship between two terrorists, a Saudi official and a former intelligence collaborator. However, he found no trace of links with the Government or the other spheres of power in that country. Nor did it provide the evidence that the families hoped to obtain.

All that was achieved was to prove that fifteen of the nineteen terrorists who hijacked the four planes used in the attacks (two of them destroyed the New York towers killing thousands of people) were Saudis. In addition, two of the Al Qaeda activists who organized the attacks were related to a possible collaborator of the Saudi Arabian intelligence services, as well as to the imam of a Los Angeles mosque accredited since 1990 as a consular officer of that country. The Riyadh government has always denied any link to the terrorist acts and their perpetrators. In fact, the American commission of investigation of the attacks exonerated the Saudis from any suspicion in the conclusions of its report in 2004.

Even so, numerous relatives of the victims maintain their thesis, so this week a hundred of them went to protest at the former president’s golf club as soon as they learned that he had organized a championship with the financial support of Saudi Arabia. Questioned by this mobilization, Trump responded to the media on Thursday that “unfortunately, no one has gotten to the bottom of 9/11, and they should have because some maniacs did that horrible thing to our city, our country and the world. No one has come to that, but I can say that there are great people here and we are going to have a good time,” said the former White House tenant, who stressed that Saudi businessmen “have invested in many American companies, they own large percentages in many American companies ».

The Republican leader seems determined to run again for the presidential race, although his behavior weighs heavily on him on January 6, 2021. That day, a crowd of extremists stormed the Capitol in Washington after being cheered on by Trump and his complaints about a non-existent electoral fraud that, according to him, would have displaced him from the Oval Office in favor of Democrat Joe Biden. The congressional commission investigating those events has brought to light Trump’s erratic and furious behavior, unable to accept his electoral defeat.

But if only the story of those days can already earn him a criminal prosecution with unforeseeable consequences, the former Republican president has not hesitated to step into another puddle, this tremendously painful one by delving into the worst nightmare of Americans, and becoming the target of criticism from the affected by 9/11 after encouraging golfers to leave the PGA Tour (the US professional championship) to join LIV, the tournament held at their own New Jersey club with Saudi funding. “What they are doing for golf and the players is important,” said the former president, who has already assured that in no case is he willing to cancel the circuit.

Treasury Direct: for the 2nd session in a row, the floor of fixed rate bonds drops to below 13% per year

Fri Jul 29 , 2022
After strong falls the day before (28), the public bond market recorded mixed rate movements on the morning of this Friday (29). Short-term and intermediate-term fixed-rate bonds show a drop in interest rates, while longer-term inflation-linked bonds operate with higher returns, for the most part. After statements by Jerome Powell, […] 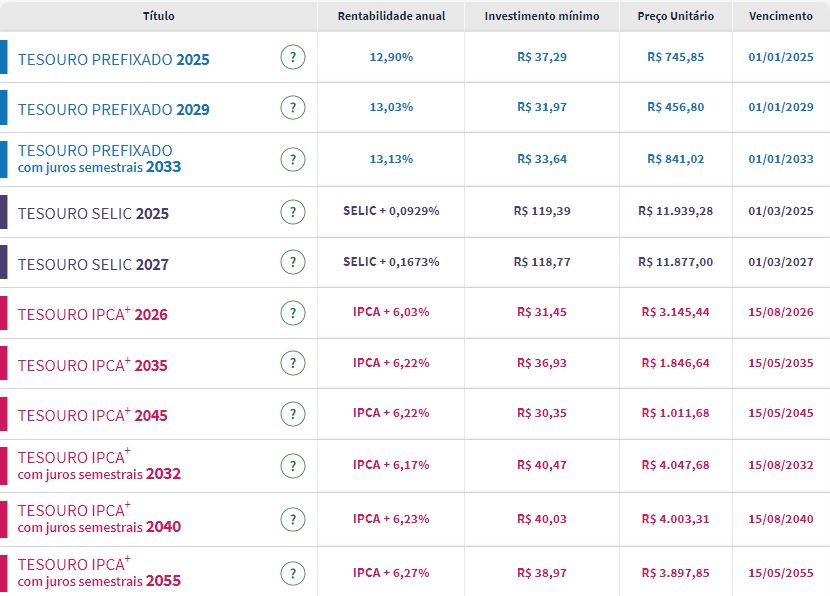