This Thursday’s session (15th) is marked by the presentation of the Central Bank’s Economic Activity Index (IBC-Br), which showed an increase of 1.17% in the economy in July in the monthly comparison, well above market expectations.

For Gustavo Sung, chief economist at Suno Research, the result is a reflection of the improvement in demand conditions and the reopening of the economy, with a recovery in the job market and tax benefits.

The upward movement is expected to continue for a few more months, but it may cool down at the end of the year, due to high interest rates, widespread inflation and the depletion of the benefits of economic reopening, says Sung.

Also noteworthy is the information that the People’s Bank of China (PBoC, the Chinese Central Bank) announced the maintenance of the one-year rate for its medium-term credit line at 2.75%, with an injection of 400 billion yuan.

The day is also full of new data from the US, which showed that jobless claims came in below expectations, while retail came in above expectations.

Once again, the yields offered by American bonds (Treasuries) advanced in most terms, around 10:20 am (Brasilia time).

In Treasury Direct, the public bond market operates with high rates this morning. Highlight for fixed rate papers, in which the maximum interest offered reached 12.10% per year in the first update of the day.

Also high in real returns delivered by inflation-linked bonds. The highest real remuneration was offered by the IPCA+2055 Treasury, in the amount of 5.96% per year, above the 5.90% per year registered the day before.

Check the prices and rates of all public securities available for purchase at the Treasury Direct this Thursday morning (15):

On the external scene, investors monitor new activity indicators in the United States. According to the Commerce Department, retail sales in the country rose 0.3% in August compared to July, to US$ 683.3 billion, according to data with seasonal adjustments released this Thursday.

The result exceeded the expectations of analysts consulted by The Wall Street Journal, who predicted stability in the period.

Excluding automobiles, however, sales in the American retail sector fell by 0.3% in the monthly comparison of August. In this case, the forecast was up 0.1%.

The data for July compared to June were revised downwards. In the case of total sales, the original stability was revised down to 0.4%. In relation to the result without automobiles, the initial increase of 0.4% changed to stability.

Also note the claims for unemployment benefits in the United States, which fell from 5,000 in the week ended September 10, to 213,000, according to seasonally adjusted data published this Thursday by the US Department of Labor.

The result came below the expectations of analysts consulted by The Wall Street Journal, who predicted 225,000 requests.

The number of continued orders increased by 2,000 in the week ended September 3, to 1,403 million.

In the domestic scene, the advance of 1.17% registered in the IBC-Br came well above the expected by the market (which projected a high of 0.30%, according to the Refinitiv consensus) and represents the second consecutive month of growth. In June, the indicator had a high of 0.69%, in the monthly comparison.

Also on the economic scene, the Ministry of Economy revised upward the 2022 GDP growth to 2.7%, surpassing the previous projection of 2.0%.

This is the second consecutive increase, explained by the above-projected result for the activity in the second quarter and positive indicators that began to be released for the second half of this year.

In relation to broad consumer inflation (IPCA), the variation for this year was reduced from 7.2% to 6.3%, informed the Ministry of Economic Policy (SPE). For 2023, the projection remained at 4.50%.

Lula and return to the Union

On the political scene, the delivery by the presidential candidates of the partial accountability of the campaign, until Tuesday (13), showed that the candidate Luiz Inácio Lula da Silva (PT) leads the ranking of declared expenditures, with a report of electoral expenses of R$ 52 million to date.

With a history of omissions in electoral spending in the 2018 campaign, Jair Bolsonaro (PL) informed the Electoral Court that he had so far spent less than half of what his main rival, R$21 million, in his campaign.

Also noteworthy is the information that the Federal Court of Auditors (TCU) ordered the Ministry of Economy to send, within 30 days after notification, the schedules for returning to the Union the amounts contributed in public banks through the direct issuance of securities from the Federal Government. federal public debt.

The Court’s decision was taken after an appeal by the economic team against a decision that altered the returns in progress by the National Bank for Economic and Social Development (BNDES).

BNDES claimed that the payment of funds would harm the bank and proposed a second schedule with the return of the amounts until 2040. The Minister of Economy, Paulo Guedes, has publicly demanded the return of R$ 90 billion still in 2022. According to him, these funds will be used to reduce public debt.

beware of this new scam that arrives in Spain

Thu Sep 15 , 2022
Parallel to the efforts of security companies, attackers also manage to reach our devices in more original ways. There are also other methods that have been used for years and apparently are still effective, since victims keep turning up. In this case we are going to talk about a scam […] 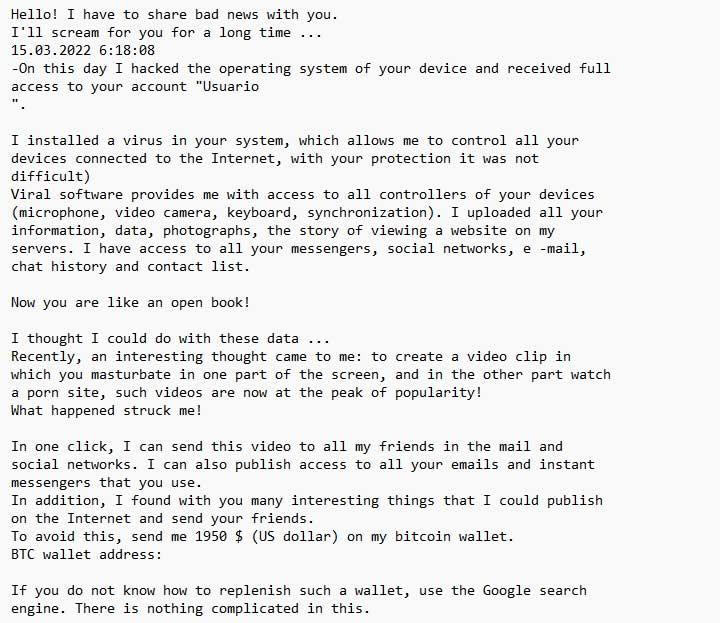