In addition, in the area of ​​energy, he chairs the Board of Directors of the Association of Energy Transmitters, a union that brings together the transmission companies of the Chilean electricity sector.

Santiago de Chile.- Since May, Arturo Le Blanc Cerda has assumed the position of General Manager of Transelec, the largest electricity transmission company in Chile, after 10 years with the company.

Le Blanc is a lawyer from the University of Chile and has a Master of Laws (LLM) from Duke University (North Carolina, United States). In addition, in 2018 he completed an MBA at the ESE Business School of the Universidad de Los Andes.

His experience highlights that between 2001 and 2005, he worked as a lawyer at the airline LAN Airlines. In turn, between 2006 and 2007, he held the position of Associate in Capital Markets and Financial Group at the law firm Shearman & Sterling, based in New York City, and from 2007 to 2012 , the professional was Senior Associate in Capital Markets and Financial Group of the Law Firm Barros & Errázuriz in Chile.

In the academic field, from 2016 to date, Le Blanc is a professor of the Master of Laws (LLM) at the Pontificia Universidad Católica de Chile. He has also participated as a Foreign Visiting Professor at the University of Calgary, in Canada.

In 2019 he received recognition as “General Counsel of the Year” in its edition for Latin America, being the first Chilean professional to obtain said award.

In addition, in the area of ​​energy, from September 2020 to date, he chairs the Board of Directors of the Association of Energy Transmitters, a union that brings together the transmission companies of the Chilean electricity sector.

"There is no holy war, only pain"

Mon May 2 , 2022
Religious service in the independent Orthodox Church of the Dormition of the Virgin Mary, very close to a monastery attached to the discipline of Moscow. / S. Garcia The Ukrainian Orthodox Church breaks ties with Patriarch Kirill, the same one who blesses the invading troops and is Putin’s greatest supporter […] 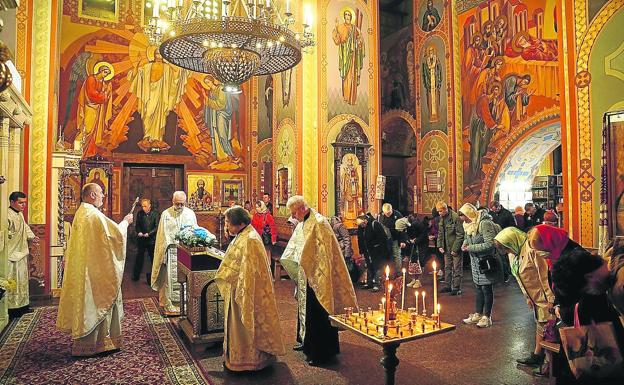