Shadow Warrior 3 is one of the first person shooters that has attracted the most attention during the year, although adapting to its improved mechanics can take timeThere are certain uses of the context that surrounds us that are essential to get rid of potential enemies, and continue with our journey in the title

Shooters are usually among the favorite titles of most users who play on their computers. Also, Shadow Warrior 3 is one of the most successful first person shooter games these days. Considering its good time in the market, we review several tricks to improve your performance in it.

Indeed, if you are taking your first steps with Shadow Warrior 3or looking for a new first person shooter game, Probably in this article you will find several suggestions that will be of great help to you.. We have an extremely interesting proposal, which combines very well the shootings with the melee combats, and a free run system that gives us some independence regarding the plot.

The point is that you will spend most of the time in Shadow Warrior 3 shooting and dodging bullets in different different. Like Lo Wang, players need to know how to properly use a huge variety of weapons while engaging in fast-paced combat, and these tips should save you some time learning it.

Regarding its predecessors, it is important to note that Shadow Warrior 3 offers a lot of tools based on new game mechanics that allow you to prevent death, but also brutally destroy enemies. But, as we have been saying, the key is to learn to master those mechanics.

Constant movement in Shadow Warrior 3 reduces the chance of the character taking damage from enemies. What’s more, you can complement that constant movement of defense with the abilities of your characters.

Best of all, this title offers us many vertical movement alternatives, which are important. You must explore the walls and look for elements to hold on to get rid of a large number of threats.

In fact, we are sure that Lo Wang will appreciate the chance to show off his acrobatic skills..

Another observation to fully enjoy one of the best current PC games has to do directly with Lo Wang’s katana, as iconic as her monstrous messy hair.

We are referring to player’s primary offensive weapon in early levelsuntil you get used to it. It is very valuable to know that it can be upgraded to deal more damage to opponents.

The katana can knock down enemies with a single attack and deal damage, and as you manage to stunt enemies, you’ll get multiple additional attacks to use with that iconic sword.

In addition to the aforementioned katana, players also they should update the weapons called Sidekick. After two rounds of upgrades, they manage to stun enemies in the airfor Wang to finish them off or escape.

Gore Weapons are hideous organ destroying tools found on the corpses of enemies. These weapons are basically attached to the body of the enemy, so you will have to destroy it.

The arsenal includes floating rooms shown above, laser grenades, and more. However, they can only be obtained using finishers, special knockdown moves that require one to three energy bars.

This has a slight trade-off since finishers can restore Lo Wang’s health if it’s low. Collecting the yellow pills will restore the gauge, but not having the finisher energy available means you could miss out on a Gore weapon, so be sure to pay attention to that essential detail.

Bodytone presents a treadmill that allows you to correct your stride

Wed Mar 30 , 2022
According to Professor Alberto Encarnación, Director of the Sports Biomechanics Research Group of the Department of Physical Education at the University of Valencia, “the Biofeedback System incorporates a technology that will allow us to incorporate notable and beneficial habits and improvements in 7-8 days. our health”. (30-3-2022). Bodytone will present […] 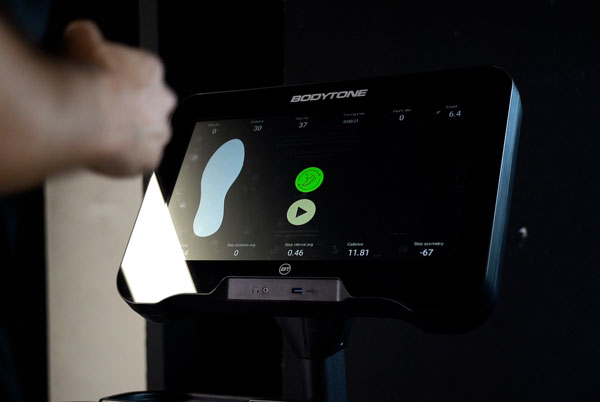