CHAMPIONS OF THE DAY. From left to right, Oriol Castelló, David Sainz and Quim Esteba, occupants of the podium of the competition section included in today’s stage of the Volta a Menorca 2022- Trofeu Lluís Gay.

(6-30-2022). Another intense day in the Volta a Menorca 2022-Trofeu Lluís Gay in which, while Daviz Sainz, Quim Esteba and Oriol Castelló enjoyed their particular podium in the competition section, the German Andreas Bredendiek suffered a broken bench stern of your boat. The expeditionaries have done a stage twice as many miles as those planned.

Today, a new stowaway, the third in a row, for the skaters of the Volta a Menorca 2022-Trofeu Lluís Gay. After the first day of 24 miles and the second of another 24 miles, today’s was 21, although in a straight line. In reality, they have become about 30, according to the regatta track, as Oriol Castelló, from Club Maritim Cubelles, explained to CMDsport, who then pointed out that “we have practically polished the Volta in three days ”.

In principle, it was planned that today’s stage would go from La Vall to Fornells, that is, to travel about twelve miles, but the organization of the Volta has finally decided to put the end of the stage further away.

The reason for this has been the announcement of the north wind of about 30-35 knots scheduled for tonight and which has led to the Captain of the Santa Eulalia deciding that the dinghy spend the night in the port of Mahón for security reasons.

The skaters have left La Vall around 11 in the morning. It was blowing about 15-17 knots from the west (a “powerful garbi”, explained Oriol Castelló), for which all the expedition members have rigged the boat to withstand the gale if it got worse.

From La Vall to the height of the Addaia pass, the skaters have sailed for about two and a half hours making upwind tacks. This section has served Oriol Castelló to verify their suitability near the coast.

Arriving at Cala Pregonda, a little before reaching Fornells, the technical director has started the start process to start the competition section. It was still blowing hard and, after nearly three hours of delivery, more than one had to muster up the courage to face what was coming.

After leaving, Castelló has followed the strategy of going along the coast. This has allowed it to position itself at the head of the fleet.

However, one of the expeditionaries did not have such a good time. The German Andreas Bredendiek had broken the stern bench just five minutes after starting.

All in all, the skipper of the ‘Patinero’ has shown courage and tenacity and despite what was blowing and the fragility of his boat he has decided to endure the entire sleeve.

The end of the competition section had been raised at the height of the Favaritx cape lighthouse in the northeast of Menorca.

The skaters have been accumulating miles while overcoming coves. While Castelló continued to ‘outline’ the coast, despite the fact that the wind was waning, Quim Esteba has decided to go out to sea. And David Sainz has gone with the “master”, as he explained later on the ground.

The entrance has been a heart attack. At the last moment, the ‘pupil’ David Sainz, from the Mar i Vent Canet Club, ‘stole the wallet’ from the “teacher”, Quim Esteba, from the Tamariu Yacht Club, and entered first with just four seconds ahead of Esteba.

The last to enter was Andreas Bredendiek, who put on a show of endurance with his dilapidated skid at the stern during the nearly two hours that the race lasted.

After finishing the competition section, the skaters went to Cala de Es Grau where the boats will spend the night today.

After the two races played, Oriol Castelló, from Club Maritim Cubelles, leads the provisional with 5 points. The second is David Sainz, with 8 points; and the third, Marc Morillo, also with eight points.

Tomorrow the skaters plan to arrive in Mahón. It will be just 12 miles. The question is under what conditions. We will have to see what ‘legacy’ leaves tonight’s north wind.

The truck of shattered dreams

Thu Jun 30 , 2022
The family of a Guatemalan teenager killed in the Texas truck tragedy travels by bus to collect the body. / s. sebastian/Reuters As the 53 immigrants suffocated inside a trailer in Texas are identified, their lives and miseries can also be reconstructed When they were found in a trailer that […] 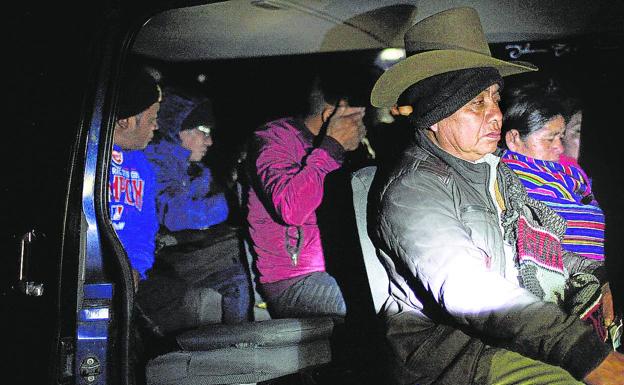