Before missiles began to rain down on their heads, Kharkov had 1.4 million inhabitants. It is an industrial city, the second largest in Ukraine, located just 30 kilometers from the border. On the streets of Kharkov, only Russian is heard and everyone has a relative who lives on the other side of the border. For many, the Russians were like brothers.

Until 2014 hardly anyone in Ukraine thought that Russia could launch a frontal attack. The Maidan revolt and the uprising of Russian-backed separatists in the Donbass region radically changed the perception in much of a country, in which there are around 30% citizens of Russian origin and customs. In Kharkiv not so much.

This city is attached to the Donbass, just 300 kilometers from Lugansk. During these eight years of clashes in the border region – in which some 14,000 people have died – there were still quite a few people who were reluctant to contemplate an open attack by Russia against their population. Their families are on both sides of the border. “We are half Ukrainian, half Russian. My grandmother is from St. Petersburg, and my grandfather is from Fastov, in the Kiev region. We were like sister nations. How could we think that they were going to bomb us?”, explains Marina Shapobal, a 37-year-old sales manager of an interior design store.

Everything changed last Monday. The city had already been bombed for several days. Even some residential buildings had received the impact of the projectiles. But there were still people who thought it might be a mistake or even attributed the shooting to Ukrainian forces. But on Monday “dozens” of civilians were killed. Some of them were massacred after several days locked in the cellars. People who thought there would be a ceasefire while the Gomel negotiations were going on. “When they went out to buy food and water for a moment, they started shooting at them,” laments Lyudmila Hritsai, a 25-year-old teacher. The videos of the civilians killed in the street next to their water bottles have been the straw that broke the camel’s back. “We don’t understand why he does this,” adds Marina, unable to hold back her tears.

Perhaps because of that feeling of anger and disbelief, the missile that fell yesterday morning in the heart of Kharkov did not cause any surprise either. Marina felt desolate. And the confirmation of something that many were reluctant to believe. “They want to destroy the whole city,” she warns.

The cruise missile destroyed the building of the Kharkov Regional Administration. Around it there are no military installations. Only homes, shops and offices. Various sources speak of 10 dead and at least 20 wounded. All civilians. During the rest of the day more bombs continued to fall – also in residential areas – and the dead continued to accumulate in the streets.

Marina Shapobal “We are half Ukrainian, half Russian. How could we have thought that they were going to bomb us?”

Lyudmila Hritsai. «My aunt lives in Russia and when she told her about the attacks she told us that we were making it up»

Anna Chaka. «We are in a shelter 22 people all day. The children are terrified when they hear the bombs»

Tratorkin Iliya. “I saved my life because I stayed to feed the cat and didn’t go out when my neighborhood was attacked”

Panic has spread in Kharkov. Lyudmila explains that people believe that the invaders want to destroy their city, as happened in Donetsk and Lugansk. Those who did not flee the first days of the war and have not taken up arms regret not having done so during the first days. But the roads and bridges are busted. And no one can get out of cellars safely.

In one of these shelters is Anna Chaka, with her husband and three children. Along with them are 17 other people, including several children. They have bathroom and kitchen. There’s also plenty of food and water, but supplies are starting to run out and hardly anything is open. They all sleep there together. The children only go outside for 5 minutes a day when nothing is heard outside. The worst is the faces of the little ones when a bomb falls. “The sound terrifies them,” explains Anna.

One of the things that most outrages the residents of Kharkov is the disbelief of their relatives on the other side of the border and the lies on Russian television. Lyudmila also has an aunt in Russia. “When we told her what was happening, she told us that it was impossible, that we were making it up. They believe that we are not at war, that the Russian army is liberating us from the fascists. On television they are told that the operation is a success,” laments the young woman. “My relatives don’t believe it either,” adds Marina.

How to enable and disable Microsoft Defender in Windows 11

Wed Mar 2 , 2022
On many occasions we will need enable or disable Microsoft Defender on Windows 11. It may be to install a program or make some modification in which the antivirus complicates our lives. Is it easy to do it? Totally, we have two methods to disable it. We must bear in […] 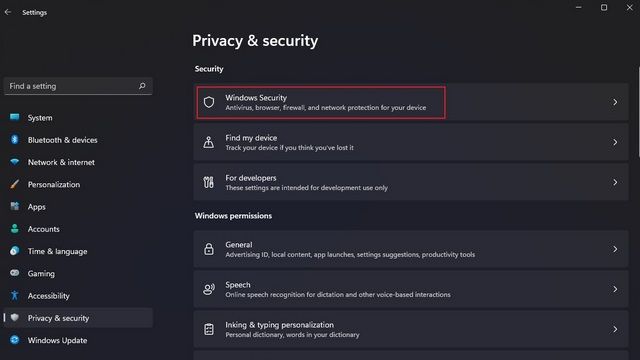