Protest against the repeal of the abortion law before the US Supreme Court. / EFE/Video: EP

The Court returns that power to the States, thirteen of which will automatically outlaw it and others will limit it

The enemies of abortion already enjoy a historic victory in the country that presumes to illuminate the world as a beacon of democracy and civil rights: “Abortion is not a constitutional right,” the Supreme Court of the United States determined this Friday. As soon as the sentence that since 1973 protected the right of women to decide on their own body was repealed, thirteen States that had approved ‘trigger’ laws to automatically shoot themselves began this Friday to annul abortion and many others will limit it significantly in the coming months .

Only Poland, Nicaragua, and El Salvador have restricted the right to abortion in recent decades, making the United States part of a strange club. It seemed like an apocalyptic scene that no one dared to believe, despite the fact that the controversial sentence had been leaked last month. “This will be the first generation of women who will have fewer rights than their mothers,” Congress spokeswoman Nancy Pelosi lamented.

The first state to make it illegal this Friday was Missouri, where a woman or a doctor can already go to jail for terminating a pregnancy. Behind comes Mississippi, which can claim the trophy for giving the court the opportunity to review the ‘Roe vs. Wade’ case law, which changed the lives of American women nearly half a century ago. Since then, female mortality has fallen, procedures to terminate pregnancies have become safer than childbirth, and women have been able to finish their studies, become independent, and compete with men in all sectors. Something that bothered many, starting with Donald Trump, the president who appointed the conservative majority of the Supreme Court and came to power with the promise of taking the country back “to the old days.”

1973 is the year in which the sentence was imposed that protected at the federal level the right of women to decide on their own body. Now that the Supreme Court has ruled against abortion, States will be able to decide whether to make it illegal, limit it or allow it.

Missouri, the first to outlaw this practice. The first state to outlaw abortion after the repeal of the sentence was, this Friday, Missouri. From now on, in this territory a woman or a doctor can go to jail for terminating a pregnancy. The second State to follow this same example has been Mississippi.

49 years have passed since she changed the lives of American women for the better. Since then, their mortality has fallen, procedures to terminate pregnancies have become safer than childbirth, and women have been able to become independent.

“Roe was outrageous from the start,” Judge Samuel Alito said in his ruling, speaking on behalf of the 6-3 conservative majority. “Her reasoning for him was extraordinarily weak and the decision has had damaging consequences. It is time to heed the Constitution and return the issue of abortion to the elected representatives of the people” in the States.

The alleged ‘neutrality’ that the court presumes in its majority opinion was called into question by the very comments of Supreme Court Chief Justice John Roberts, a moderate conservative appointed by George W. Bush who criticized his colleagues for having “unnecessarily” charged » the jurisprudence of ‘Roe vs. Wade’. To decide Mississippi’s case to limit abortion to the first 15 weeks from conception, it was not necessary to overturn the case law protecting abortion, Judge Roberts observed. It was enough to annul the judgment of ‘Planned Parenthood vs. Casey’, which in 1993 replaced the framework of the first trimester of pregnancy in which it was framed by that of the “viability” of the fetus. This Friday’s decision establishes that life begins at the moment of conception, which calls into question other procedures such as the morning after pill or even the destruction of in vitro fertilized embryos.

The Supreme “is on a crusade to end women’s reproductive health,” accused the spokeswoman for Congress, Nancy Pelosi. “He is repulsive”, seconded the first governor of New York, Kathy Hochul, who has promised to maintain that right in the State. Perhaps it is not possible for you. Pelosi warned that the conservatives will not end there, but will try to pass a national veto in Congress, now that the right to abortion has been left unprotected. The legislative elections in November will provide the Republican Party with the opportunity to regain control of the chambers thanks to runaway inflation and the alarming price of gasoline.

“It is outrageous that the electoral agenda has to be limited to recovering a right that we have enjoyed for half a century,” lamented activist Cecile Richards, who was president of Planned Parenthood, from Texas, “but I hope that people take the elections seriously. of November”. 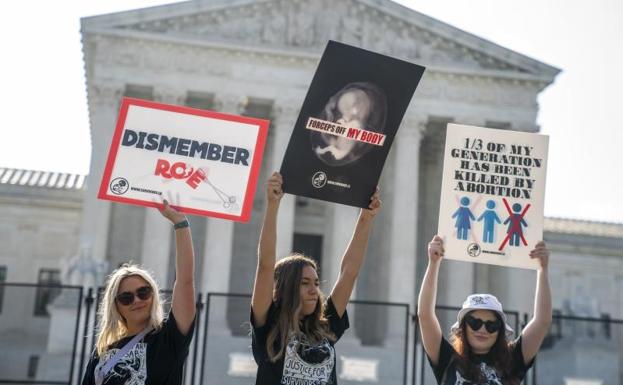 Protest against the repeal of the abortion law before the US Supreme Court. / EFE

That message did not serve to give victory to Hillary Clinton in 2016, with whose defeat the news of this Friday became inevitable. It was only a matter of time and the ticking of the heart, given the advanced age of the judges on the court, who, when they died, gave Trump the opportunity to appoint three substitutes. “God decided it,” the former president answered this Friday satisfied.

Not exactly, since one of them, Anthony Scalia, died ten months before Barack Obama finished his term. The then leader of the conservative majority in the Senate, Mitch McConnell, who this Friday applauded the decision of the Supreme Court, prevented the Senate from voting for Obama’s choice on the grounds that the elections were close. All the more so, the succession of Judge Ruth Bader Ginsburg, a month and a half before Joe Biden was elected president, should have followed the same steps, but Amy Coney Barrett, a favorite of the most radical religious groups, was sworn in at the position a week before the elections.

Upset the balance of the law

The cards were laid. With this addition, the court gave Mississippi a rare opportunity to reopen the case it had already filed. By expressly asking whether the prosecution was asking the court to strike down the ‘Roe vs. Wade’ case law, the court was sending a clear signal that it was open to it.

“This will be the first generation of women who will have fewer rights than their mothers,” Pelosi denounces

“Make no mistake, this decision is the culmination of deliberate efforts over decades to alter the balance of the laws,” President Joe Biden warned Friday. “It is the materialization of an ideology so extreme that a woman can be imprisoned for defending her own health”, since in the absence of federal regulation there are States like Texas that do not contemplate the assumption of saving the life of the mother.

The president lamented that “it will be poor women who suffer the most,” because they will lack the financial means to travel to other states where it is allowed. The burden of a child for a woman who lacks economic means will de facto condemn her to live in poverty. And she will not end there. “The right to intimacy, to privacy, to gender freedom and equality will be on the ballot” next November, Biden said, because the conservative crusade continues.

The president of Brazil, Jair Bolsonaro, criticized the abortion that the Brazilian Justice authorized for an eleven-year-old girl who was raped. “It does not matter how it was gestated or whether or not the law protects it,” warned the president, who pointed out that the fetus was already 29 weeks old, so “it is inadmissible to speak of taking the life of that defenseless being.” The minor, however, was not aware of the pregnancy until week 22. The girl underwent an abortion on Wednesday at a hospital in Santa Catarina, after the center requested a judicial authorization from the family in May, as established by the protocols. of the Ministry of Health when the pregnancy exceeds twenty weeks.

Sat Jun 25 , 2022
The participants of the 2022 Junior Sailing Skate Championship of Catalonia with their coaches, the president of the Martítim Cubelles Club, Jordi Aránega, and the members of the Regatta Committee. (24-6-2022). The strong wind, the monumental breaker at times and the sea in the background have led the regatta committee […] 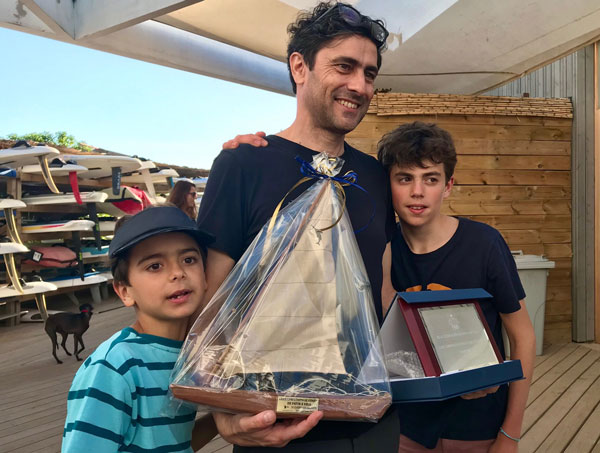