(16-5-2022) The Contentious-Administrative Chamber III, of the Supreme Court, has annulled the appointment, through a Royal Decree, of the general director of the Higher Sports Council, Albert Soler, for not having sufficiently justified the Government the reason for taking advantage of the exception to the general rule that the general directors are career officials of the Subgroup A-1.

The Supreme Court, in a ruling for which Judge Luis Díez-Picazo was the rapporteur, has upheld the appeal of the Federation of Associations of the Higher Bodies of the State Civil Administration (FEDECA) against the Royal Decree that allowed Albert to be appointed Soler as general director of the Higher Sports Council. He understands the room that there are no reasons to exclude these two directorates general from the general rule that they should be civil servants.

Soler returned a year ago, in 2021, to a CSD where he already held the same position between 2008 and 2011. In that first stage he temporarily served as Secretary of State for Sport and as president of the CSD. In the second he was the general manager, a position he had also held in the first. Soler came to the CSD from FC Barcelona, ​​where he was manager between 2014 and 2021.

According to the sentence, “it is a vague and generic motivation”. From his reading it is not clear what specific actions or initiatives are those that could not be carried out by career officials. The transcribed passages are still a manifestation of a type of official literature that, in a solemn tone, uses many words to say very little. In short, this room does not manage to perceive where the “special characteristics” or the “exceptional circumstance” of the General Directorate of Sports reside, which is what is required by article 66.2 of the Law of the Legal Regime of the Public Sector to justify the exception to the general rule.

To this must be added, adds the Supreme Court, that the appellant has mentioned bodies or scales of officials of Subgroup A1 who, due to their preparation, could perform this General Directorate, and that, in view of this, the State Attorney “has limited himself to adduce that this body does not have sufficient specific training in the matter concerned”. “But this objection -indicate the magistrates- is, again, generic: it does not explain in the least detail why the type of official mentioned by the appellant is not suitable to occupy that General Directorate”.

Nor does the Chamber accept the other argument of the State Attorney, which consisted in the fact that the accused administrative or bureaucratic nature of the functions entrusted to that Directorate General was not an obstacle for it to be exempted from the general rule, since the Director General would always have civil servants of specialized careers that would help him in that aspect. “This reasoning – considers the Supreme Court – is not convincing, fundamentally because it would be valid for any General Directorate. In addition, it implies implicitly admitting that the functions entrusted do not have any appreciable particularity”.

For all these reasons, the Supreme Court annuls the sections of Royal Decree 311/2021 that served as the basis for the possibility of appointing people who were not career civil servants from the A-1 subgroup, and consequently the Royal Appointment decree of Albert Soler, making it clear in the ruling that “the reason for the annulment of this act is not the absence of the general suitability requirements in the appointed person, but the invalidity of the regulatory basis on which it was based”.

Hezbollah Shiites could lose their majority in Lebanon's Parliament

Mon May 16 , 2022
Hezbollah supporters listen to the assessments of former Minister Gibran Bassil after the Lebanese legislative. / AFP The provisional count of the legislative votes places them far from the 65 seats of the majority that they achieved in 2018 The first legislative elections in Lebanon since the economic collapse of […] 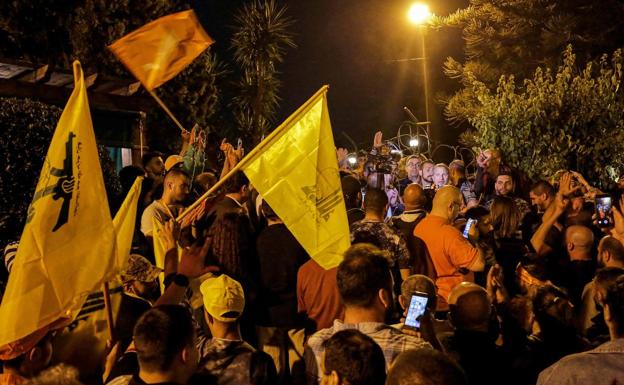