The skates were loaded at Club Patí Vela Barcelona last Thursday, June 22. The delay in the arrival of the boats in Mahón, therefore, was not due to a lack of anticipation by the organization.

(27-6-2022). The Volta a Menorca 2022 will have to wait until tomorrow, Tuesday, to start. Truck overbooking problems on the Ferry have prevented the skates from arriving in Mahón today, Monday morning, as planned.

The skaters participating in the Volta a Menorca 2022- Trofeu Lluís Gay already know that their edition will be historic. And it is that, for the first time in the history of the Menorcan sailing round, the journey of this eighth edition has not been able to start on the scheduled day because the skates have not arrived in Mahón on time. Apparently, the advance with which the skates were loaded on the truck at Club Pati Barcelona on June 22 has been of little use.

When the truck with the skates was supposed to board yesterday, those responsible for the Ferry prevented it, arguing that there was overbooking of vehicles of this type on the boat.

In principle, the skates are expected to arrive tomorrow, Tuesday, in Mahon, that is, 24 hours after the date established in principle. Based on this, the participants and the organization hope to start the journey tomorrow, Tuesday.

CHANGE OF DIRECTION THROUGH THE TRAMONTANA

In Menorca the north wind is blowing and this has led the organization to decide to go around the island from the south of it and in a clockwise direction and not from the north as initially expected.

As a result of this, the organization has decided to start this Volta a Menorca 2022 with a ‘double ration’, that is, going through two stages in a single day, the one that should have been carried out today Monday plus the one tomorrow Tuesday.

The double ration scheduled for tomorrow means leaving the Mahón naval base, heading towards Cala en Porter and, after reaching it, continuing to Cala Galdana. This will mean having to travel more than 30 miles.

The participants, in any case, as the expeditionary Oriol Castelló, from the Club Maritim Cubelles, has declared to CMDsport, have taken with “philosophy and good humor, first the mess of the non-arrival of the skates and, later, the announcement of the ‘ double ration’ of stages scheduled for tomorrow, Tuesday”.

As one of the organizers of the Volta, Jordi Obach Xufra, later added, “this is an adventure and it is already known that, sometimes, adventures are subject to unexpected events”.

The skater Oriol Castelló has highlighted the quick reaction of the organization to the inevitable suspension of the start of the Volta today, due to the aforementioned non-arrival of the skates: “Pp has offered us tourist activities as an alternative and has entertained us with a magnificent meal in the Santa Eulalia pailebote and tonight a dinner in Fornells”.

At least 14 dead when Russia bombs a shopping center with more than 1,000 customers

Mon Jun 27 , 2022
The mall on fire. / afp Zelensky foresees “an unimaginable number of victims” among the ruins of the complex, burned by missiles launched by aviation The Ukrainian Prosecutor’s Office and the international forensic investigators who investigate the war crimes committed during the conflict now have a new case on their […] 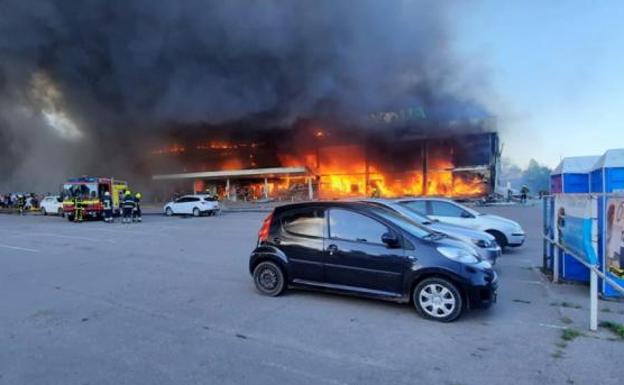