The ten skates of the Volta a Menorca 2022 rest tonight in Cala Galdana. PHOTO: Oriol Castelló

(28-6-2022). The expedition members of the Volta a Menorca 2022 have already recovered the gap caused by the late arrival of the skates in Mahón. Today they have sailed about six hours to cover the 27 miles that separate the naval base from the port of Mahón, from Cala Galdana.

Today has been an intense day, much more intense than yesterday’s placid tourist day. And it is that the expeditionaries of the Volta a Menorca 2022 in skate to sailing have ‘breakfast’ the unloading of the truck that today, finally, at eight in the morning, has arrived at its destination with the skates. A whole ‘training’ of strength to loosen the muscles early in the morning and deposit the ten skates that participate in the Menorcan round on the pier of the naval base in the port of Mahón.

THEY HAVE REMOVED THE CABLE FROM THE BASE RAMP NAVAL

The luck, however, has been that the historical and inconvenient cable that had been on the embarkation ramp of the naval base has been eliminated and, therefore, the skaters have been spared having to cross it with their skates dismounted and having to put the stick, after overcoming the cable, at the edge of the water.

The expedition members of the previous seven editions of the Volta a Menorca were not so lucky and had to face this obstacle that opened and, of course, closed the Menorcan round, since the Mahon naval base is the starting point and the ending point of the Volta.

At 12:20 p.m., the skaters have launched their boats. Until the mouth they had about 30-40 minutes, since the naval base is located at the bottom of the port of Mahón and is about 3 miles from the mouth.

When, finally, they have come out to the open sea, they have encountered a north wind of about 12-15 knots. A wind direction and an ideal intensity to undertake the Volta on the south side of Menorca with Cala En Porter as the initial destination, that is, about twelve miles from Mahón.

The skates have started sailing with that wind by the fin of about 12-15 knots and the sea, if not flat, yes with hardly any waves, has allowed them to pick up a lot of speed.

The nautical director of the Volta, Rafel Figuerola, had given, before leaving, the instruction to navigate in canned and the skaters have been obedient and have avoided distancing themselves too much from each other. However, it was immediately apparent that David Sainz, from the Club Mar i Vent de Canet, enjoyed leading the fleet, despite the fact that Figuerola had already announced before starting that there would be no competition stage today.

CALM BEHIND THE ILLA DE L’AIRE

However, when passing the Illa de l’Aire lighthouse, located in the extreme southeast of the island, all that ‘wind enjoyment’ has been transformed into a drop in the wind that in some areas was non-existent and in others capriciously rollon . This has meant that while some skates were able to run, others were fed up without wind. The organization has provided the expedition members with food in the water: some fantastic and succulent roast beef sandwiches!

NEW OBJECTIVE: “’A TWO IN ONE’

That ‘rosary’ of calm, roles and light winds has lasted until Binibeca approximately. There the wind has begun to pick up intensity little by little and the expedition members have begun to make their boats run in such a way that the nautical director, Rafel Figuerola, has decided to take advantage of that ‘alignment of the elements’ to consider passing by from Cal En Porter and point towards Cala Galdana. There was the option of, effectively, ‘killing’ two stages in one fell swoop and putting the calendar of days and stages of La Volta a Menorca 2022 back ‘on time’.

And so it has been.

As Quim Esteba, the veteran skater of this Volta, has explained, for years but above all due to nautical experience, he has explained that, “finally, the thermal has ended up defeating the north wind and past Cala En Porter 15 wonderful knots from the south have appeared” . And with that wind from the south, girding parallel to the coast, the ten skates have managed to reach Cala Galdana. The first to touch down was David Sainz and, two minutes later, the German Andreas Bredendiek did so. It was 5:30 p.m.

In total they have covered 27 miles in about six uninterrupted hours of “very complete and varied” navigation, as Quim Esteba has described it.

For tomorrow, the nautical director of the Volta, Rafel Figuerola, has decided to follow the ‘program’: Cala Galdana-La Vall. They will be more than twenty miles at a stretch.

Luckily for dinner tonight the cook has curried chicken drumsticks for dinner.

The projection of the film ‘Master and Commander’ that Figuerola intends to make on the deck of the Santa Eulalia on one of its sails will have to wait until nightfall on a less intense day. Unloading ten skates from a truck, sailing for six hours to travel 27 miles and the last ones, on top of that, with a wind of fifteen knots with some gusts of 17, take their toll.

This has been recognized by the youngest of this Volta 2022 and one of the second two who participate in it, Víctor Morillo, from Club Maritim Cubelles: “I am quite tired but happy to have covered almost half the island in one day. In the end, I have suffered enough. I see that I need to train the trim so as not to go so fast with so much wind. Luckily I’ve run quite a bit with little wind, so I’m quite happy”.

Surely when Víctor lies down on his camping mat tonight, he won’t find the deck of the Santa Eulalia too hard. And probably not the others either.

Have a good and restful night, Patinaires.

The Santa Eulalia anchored in Cala Galdana waits for the skaters to return to land. PHOTO: Oriol Castelló

Tue Jun 28 , 2022
Cassidy Hutchinson after giving her testimony at the commission investigating the assault on the Capitol. / Reuters “I’m the fucking president, take me to the Capitol now!” or “I don’t give a shit that they have weapons” were some of the expressions launched by the then president of the United […] 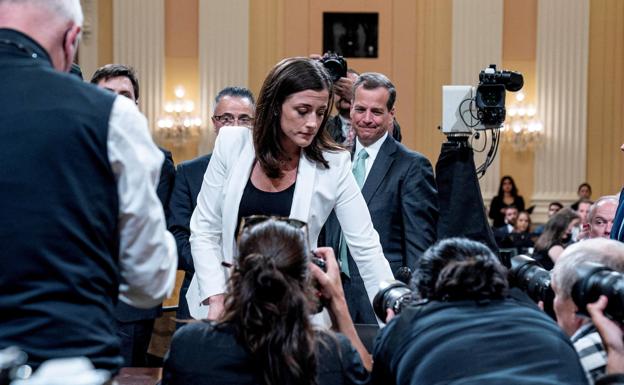