After yesterday’s ‘express’ stage, from Port de la Selva to Portbou, today’s third stage, from Portbou to Canet de Rosselló, has been a marathon stage. The six skaters taking part in the ‘Cadaqués Nord enlla’ Crossing have invested a total of seven and a half hours, of which, according to the applications used by David Gracia and David Pérez, they have been moving (navigating) for 4 hours and 54 minutes to cover the 23.5 nautical miles traveled.

Without a doubt, it has been the longest stage of the three that have already been traveled towards La Grande Motte beach, the final destination of this journey.

The expedition members left Portbou beach at 10:30 am. When they had been leaving Portbou for a few minutes, a space that has been described by David Gracia as “a hieroglyph” because, as he explained, “it blows differently at each point, both in direction and intensity”, the ‘ideologue’ of the crossing, Daniel Romaní, has lost the cover of one of the floats-warehouse of his skate. Apparently, because of the heat, the lid has been shot and has been lost in the sea.

This has caused Romaní to turn around, go back to the beach and go looking for a new cover for his float in a boat. Finally, after adapting the size of the cover to the mouth of the deck where it should be installed, the journalist and writer has been able to go back to sea, with his brother Bernat who was going to accompany him during part of today’s stage. In any case, between one thing and the other, his companions were, in theory, an hour ahead of him.

After obtaining the cover in a Nautical, it has had to be adapted to the mouth of the float-warehouse cover that Daniel Romaní’s sailboat has, which, previously, had been the record holder of sailboat crossings, Ignasi Sagrista.

It should be noted that Romaní is making this journey with the ‘Argal’, the boat that the record holder for sailing skate crossings, Ignasi Sagristá, used on his journey from Barcelona to Almería in 2018, as well as on the great journey from Sant Pol de Mar to Ithaca in the summer of 2019.

Today’s stage has been divided into two sections: the first, from Portbou to Portvendres, where Daniel Romaní’s brother concluded his journey, and the second, from Portvendres to Canet de Rosselló. In principle, it was planned to reach the beach of Le Barcarès, further north, but, due to accommodation problems, it has been decided to port in Canet de Rosselló.

The first section has been marked by a southerly wind of about 2-3 knots that, at the height of the Cerbere-Banyuls national nature reserve, before Colliure, has dissipated causing the expedition members to suffer a calm that has had them floating in the sea for an hour.

Finally, three hours after leaving Portbou, the expeditionaries have reached Portvendres. It was 1:30 p.m. Daniel Romaní, who has not met the calm of his companions, has arrived practically at the same time as his companions. There they have taken the opportunity to have lunch and Daniel Romaní has ​​said goodbye to his brother to resume the journey sailing alone.

In the second section of today’s stage, from Portvendres to Canet de Rossello, the wind scenario has changed completely or, at least, in terms of the intensity of the wind. This one was still from the south but has gone up to 12-15 knots.

Joan Manel Monfort, from Sant Salvador, explained that “it has been a demanding section. The wind was coming from the stern and we were making tacks, sometimes wanting to, and others caused by the high and powerful waves that made you surf and end up gybing unexpectedly”.

Monfort has recognized that “especially Andreu Pérez, Juan Carlos Campos and I, we have been going into the sea, while the others, especially Daniel Romaní, have chosen to go along the coast”.

In one of the surfs with an unexpected jibe, the clew pulley caught Andreu Pérez’s vest, the ‘handyman’ of the expedition, who was unable to prevent the capsize. “Juan Carlos Campo and I have approached him in case he needed help”, explained Monfort. As he added, “in the end, after several attempts, Andreu was able to lift the boat that had been placed in the chocolate maker and the only mishap he suffered was the loss of a pair of sunglasses.”

The first to arrive at the port of Canet de Rosselló was Daniel Romaní. The others have arrived shortly after. In this second section they have invested about two and a half hours “of intense work”, according to the skater from Sant Salvador, Joan Manuel Monfort. 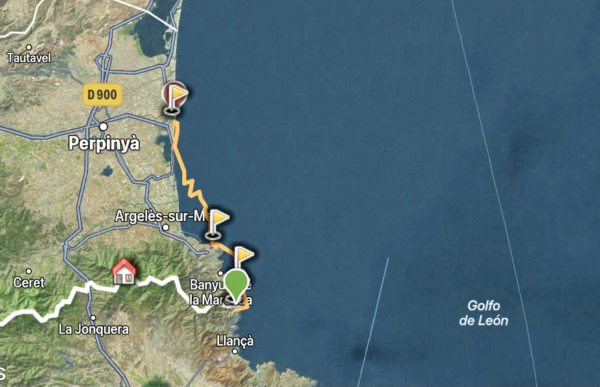 Trajectory followed today by the expedition members in the third stage of the journey.

Today the skates sleep on the beach of the sailing school inside the port of Canet de Rosselló, where they have arrived just before closing time.

Joan Manel Monfort explained that “shortly after our arrival, we have witnessed a ‘naval battle’ between corsair ships. It has been a great show that has brought together many spectators”.

The initiative was completely unrelated to the ‘landing’ of the six skaters on the French coast.

Beach of the sailing school that is located inside the Port of Canet de Rosselló where the six skates that make the crossing will sleep tonight.

ON THE EVE OF THE ‘MEGA-STAGE’

If today’s stage has been marathon with the calm one, the mishap suffered by Daniel Romaní with the lid of his float-warehouse, and the overturning of Andreu Pérez, tomorrow’s stage will be by distance.

According to David Gracia, the ‘advance guide’ of the crossing, “tomorrow’s stage is twice as long as today’s”. That would be about 40 miles.

The expeditionaries must cover in the fourth stage the distance between Canet de Rosselló and Cape Agde. 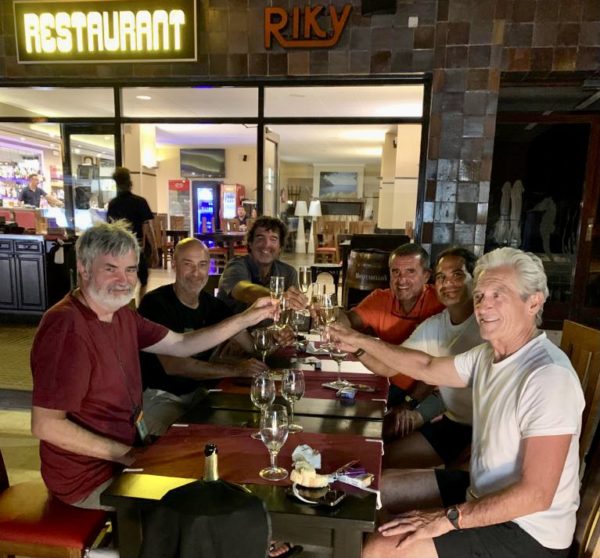 The expeditionary sis celebrated yesterday in Portbou the culmination of Daniel Romaní’s Volta a Catalunya on sailboat. The journalist and writer (the first on the left) began his Catalan voyage last year from the Ebro Delta and concluded it in Cadaqués.

Wed Aug 3 , 2022
The annual consumer inflation rate (CPI) of the countries that make up the Organization for Economic Co-operation and Development (OECD) accelerated to 10.3% in June, reaching the highest level since June 1988, according to a statement released by the OECD on Wednesday. -fair. In May, the region’s annual CPI was […]