The companies agreed conditions and collaborations in the presentation to public tenders from 1982 to 2017.

(7-7-2022). The six main Spanish construction companies have been fined by the National Commission of Markets and Competition (CNNC) with 203.6 million euros for agreeing their offers in public tenders for 25 years.

The National Commission of Markets and Competition (CNMC) has fined six of the largest Spanish construction companies 203.6 million euros for altering competition in infrastructure construction tenders for more than 25 years.

“Since 1992, the companies met weekly and decided on the public contracts in which they were going to share technical works from their offers,” says the CNMC, which has observed that “they also exchanged information about their presentation strategy” to calls for hospitals, ports, airports and highways, among other infrastructures of general interest.

The conduct constitutes a very serious infringement of articles 1 of Law 15/2007, of July 3, on the Defense of Competition and 101 of the Treaty on the Functioning of the European Union. In this case, these are practices whose effects have been “particularly harmful to society, since they affected thousands of tenders called by Spanish public administrations” for the construction and building of infrastructures.

Among the affected administrations are mainly those belonging to the field of development, including the Ministry of Development (current Ministry of Transport, Mobility and Urban Agenda) together with its agencies and dependent public business entities.

Competition explained that, since 1992, the group met weekly to analyze the public works tenders that had been published on different State contracting platforms.

In the meetings, the companies decided on the tenders in which they were going to share -among all or in a subgroup- part or all of the works that would make up the technical offers of the tenders. The works were commissioned jointly by the members of the group to external companies.

The companies could not modify the works generated jointly to present them in their offers without the knowledge and approval of the rest of the members of the group. The only customization allowed was the inclusion of logos and names of each company in the joint document to give administrations an appearance of independence in the presentation of offers.

The companies developed complex rules of operation that evolved during the time that the conduct lasted. In addition, in the weekly meetings, the companies exchanged sensitive commercial information (different from that necessary to share the work), for example, their intention to compete or not to bid, or the intention to form a UTE or Temporary Union of Companies and the members that would integrate them.

In the case of building and civil works contracts for infrastructures of general interest (hospitals, highways, airports, etc.), during the period investigated, the technical offer was on many occasions the most important competitive variable. This reached 70% of the contest score, compared to 30% corresponding to the economic score.

The jobs shared by the construction companies were always scored by the administration as part of the technical offer. In some cases, around 5%, the companies came to share the bidding project that they were going to present to the administration, which means breaching the duties of sole proposal and secrecy of the proposals and eliminates the independence required of companies .

The companies dissolved the group in 2017 and expressly stated that these agreements could be contrary to antitrust regulations.

The CNMC highlighted that the sanctioned collusive agreements have resulted in a “less variety and quality” of the technical offers presented by the companies to the administration and have also produced disadvantageous effects on competitors.

The sanctioned anti-competitive behaviors have lasted beyond the date of entry into force of the prohibition of contracting (October 22, 2015), for which the resolution is sent to the Consultative Board of Public Procurement to determine its duration and scope. .

The CNMC recalls that a contentious-administrative appeal may be filed directly against these resolutions before the National High Court within two months from the day following their notification.

This has been the fall of Boris Johnson

Thu Jul 7 , 2022
A man protests against Boris Johnson this Wednesday. The 22 refers to the 1922 Committee, an internal body of the Conservative Party / efe The cascade of resignations in the British Government in recent hours joins the ‘Partygate’ scandal, which for months has haunted the Prime Minister Boris Johnson’s journey […] 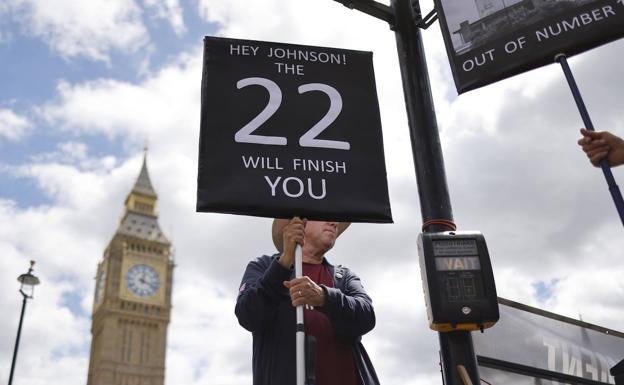