(12-4-2022). Pere Crespo, from Club Natacio Badalona, ​​is emerging as the main favorite to win this 2022 Spanish Senior Sailing Championship that will be held from April 13 to 17 in Formentera. This is revealed by a CMDsport survey in which 67 skaters have taken part, 72% in the first category and the remaining 28% in the second category.

In the eyes of the majority of the 67 skaters who have participated in the CMDsport survey on the favorites to win the 2022 Spanish Senior Sailing Championship to be held from April 13 to 17 in Formentera, the sailor from Club Natació Badalona, ​​Pere Crespo, would be the one with the most options to win.

The ‘Pere’ skipper appears again in the triad of skippers with the most options for victory, just as it happened in the consultations of the past 2021 and in 2018.

However, of those three years, this is the first time that it appears as the most voted, while in 2018 it was preceded by Oriol Mahiques and Anna Pujol and in 2021, by Oriol Mahiques. Interestingly, in the year that Crespo won the Spanish championship (Puerto Sherry, 2020) he took sixth place in the ranking of favorites.

Of the last four Spanish championships in which Cmdsport has carried out this consultation among the class fleet, the final verdict of those surveyed has been accurate on three occasions. In 2018, the main favorite was Mahiques and Mahiques won it; in 2019, the main favorite was Quim Esteba and it was Quim Esteba who took the win; and last 2021, Mahiques again led the list of favorites and it was he who took the victory.

The other two skippers with the highest percentage of votes among those surveyed were the three-time Spanish champion, Quim Esteba, from Club Nautic Tamariu, and the 2010 Spanish champion, Peco Mulet, from Club Natació Badalona. Both bosses have registered, respectively, more than 40% of votes, being 45% for Esteba and 43% for Mulet, a very small difference between the two.

The five-time champion of Spain, Oriol Castellà, from Club Vela Sant Antoni, has registered 38% of the votes, which has placed him as the fourth main favorite, while the runner-up from Spain in 2021, Jordi Aránega, from Club Marítim Cubelles , with 36% of the ballots, has been placed in fifth place. 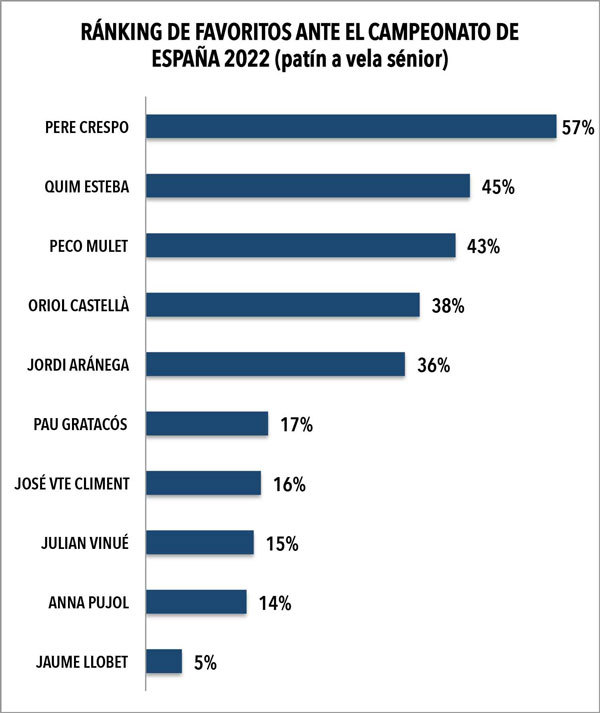 The percentages that appear in the upper graph correspond to the index of citations collected by each sailor to the question List the 3 skippers that you think have the most chances of winning the 2022 Spanish championship for senior sailing. A total of 67 sailors took part in the CMDsport survey, of which 72% were first category skippers and the remaining 28% second category.

Sat Apr 16 , 2022
Compartir Tweet Compartir Compartir E-mail The Active Entrepreneurs Initiative, promoted by UN Women, focuses on increasing employability and economic opportunities to guarantee the participation of women in the world of work. By Maria Jose Torres Santiago de Chile.- It is no secret to […]