Boris Johnson, this Monday during a visit to a scientific research center in London / reuters

The conservative party begins voting on Wednesday to find Johnson’s replacement, who will be appointed on September 5

Boris Johnson declined to identify his favorite on Monday from the large group of candidates to relieve him as leader of the Conservative Party and Prime Minister of the United Kingdom in the selection process that will officially start this Tuesday. “I don’t want to harm anyone’s prospects by offering my endorsement,” he said in his first public appearance since he was forced to resign from the leadership last week. The acting president, who visited a scientific research center in London, instead expressed his full confidence in the government program that his successor will inherit. “He has a great agenda to continue,” he told the media, mentioning infrastructure, technology and regional equality, among other props of his 2019 manifesto.

The 1922 committee, which governs the process, agreed to raise the ceiling of support to 20 deputies per candidate, compared to the usual rule of eight required in previous elections. This is intended to speed up the processing of the primaries, which in Johnson’s election took six weeks, although he was the clear favorite. His replacement will be appointed on September 5, when the first parliamentary session will take place, after the summer break, the formation announced.

Johnson fell in the middle of his first term due to leadership failures and a radical deviation in the trajectory or political strategy of the next Executive, which should be constituted by the middle or end of September, is not anticipated. “The main change with the next prime minister will be one of style, but there will be no different policies,” said British political professor and expert Vernon Bogdanor at a meeting Monday with members of the Foreign Press Association (FPA).

The same starting point was adopted by the candidates in their first electoral messages. “In the next leader we look for integrity, even before we get into politics,” said Sajid Javid, the first senior minister to leave Johnson’s cabinet in the face of the curtain of lies that Downing Street tried to cover every crisis in recent years. nine months, from the ‘partygate’ to the protection of corrupt deputies and the promotion of an apparent sexual predator. “We need a leader capable of showing leadership, who makes credible promises, unifies people and makes tough decisions in the national interest,” added the former head of Health and Economy.

For his part, Professor Bogdanor regrets that the head of government that the United Kingdom needs in this phase of geopolitical uncertainty and global economic decline will not emerge from the Tory primaries. “We need a leader capable of telling the public unpopular truths, such as the reality that the standard of living is going to deteriorate, but that leader may not win the election,” he said at the FPA headquarters.

Reducing taxes and increasing defense spending are two commitments that are repeated in the manifestos of most of the candidates, although none have indicated whether they will choose to expand the debt to finance the hole. Nor have they identified the services that they are willing to cut to clean up the economy of state waste during the coronavirus pandemic. Only the resigned Finance Minister, Rishi Sunak, warned, when launching his candidacy, that the electorate no longer believes in “fairy tales” and it is essential to act with caution and fiscal discipline. “Politicians and the media underestimate voter intelligence and common sense,” agreed Bogdanor.

Brexit is not touched

The researcher at King’s College University in London considers that the ten candidates declared to date offer “small differences in the details, but not in the principles” of fundamental issues, such as the relationship with the EU or the return to the Brexit. “The UK is also not going to return to any form of liberal internationalism,” he observed.

The academic dismisses ideology as a distinctive attribute of the conservative party, which he defines as a “realistic and resilient” force, as well as “brutal in getting rid of failing leaders” and very adaptable to temporary trends. He considers that Johnson “acted correctly” by continuing as acting head of government, although some ‘tories’ continue to demand his immediate withdrawal from Downing Street and his replacement by an interim. Bogdanor finally turns to Orwell to describe his country: “Britain is a family with the wrong members in charge.”

The term to present the nominations will close on the afternoon of Tuesday the 12th and the first round of voting will begin the following day. There will be new voting sessions until the list of candidates for two finalists is screened. The final decision rests with the estimated 200,000 party members entitled to speak in the election of the Conservative chief and prime minister.

Tue Jul 12 , 2022
Pere Crespo, on the left, and Albert Batlleriá Mitjana (on the right), winners of the Gran Premi Badalona 2022 in the first and second categories, respectively. (7-12-2022). Pere Crespo, in the first category, and Albert Batlleriá Mitjana, in the second category, have been the winners of the Gran Premi Badalona […] 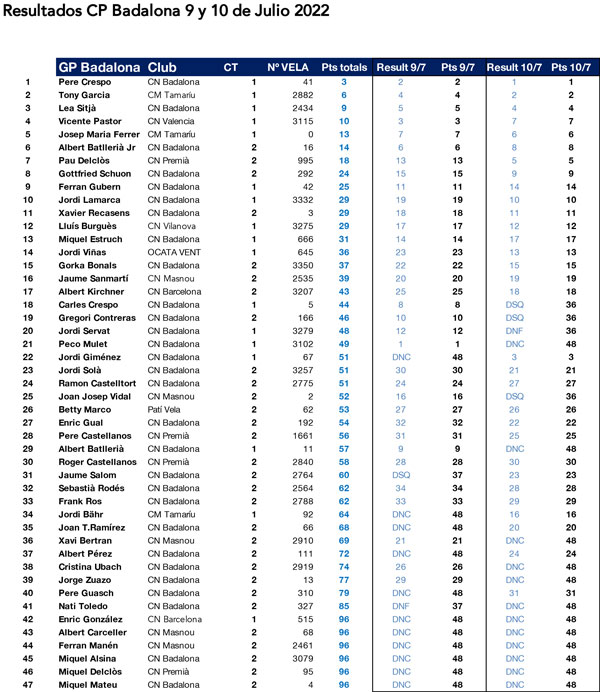