The oldest candidate to apply for registration in the 2022 Elections is José Ribamar Cutrim Gomes, 95, who is running for a seat as a federal deputy for the PRTB (Partido Renovador Trabalhista Brasileiro) in Rio de Janeiro. He was born in 1927, the year Rio Grande do Norte became the first Brazilian state to validate the female vote. The candidate was born in São Luís, in Maranhão.

Cutrim’s age is five times that of the youngest candidate in this year’s election, 18-year-old Pamela Kathellen Silva Mendes. She tries to be a state deputy in Pernambuco, for the PMN (National Mobilization Party), and declared herself as indigenous to the Electoral Court. In the occupation field, the option “others” appears.

Cutrim, in turn, is from São Luís, declared himself white and retired. This is the first election in which he has run, according to the Electoral Justice’s campaign accounts and candidacies page.

Age groups
The age group between 45 and 49 years old is the one with the most candidates – 4,762 – accounting for all the positions disputed in the 2022 Elections – president, governor, senator and federal and state or district deputies.

This and other curiosities can be found in the Electoral Statistics System, an online repository where the Electoral Court updates information on candidates, electorate and polling station, among others.

Displeasure with frozen accounts: China is said to use corona apps against demonstrators

Sun Aug 28 , 2022
Displeasure with frozen accounts China is said to use corona apps against demonstrators 6/15/2022, 3:53 p.m Four banks in the Chinese province of Henan freeze thousands of accounts in April. The customers are up in arms and want to vent their anger in front of the company headquarters. But suddenly […] 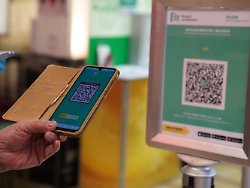