The descent through the Noguera Pallaresa is one of the most attractive in Europe, and although it has several sections, the most popular is Llavorsí – Rialp, one of the most exciting for its rapids, about 14 kilometers long.

(22-7-2022). The Noguera Pallaresa river in Llavorsí, Lleida, has been chosen as one of the best in Spain for rafting. Booking for this type of activity has increased by 80% so far this year. The Aladinia.com website explains what you need to know to practice this sport.

Summer is the best time to practice sports related to water, and among them canyoning and rafting are the most popular, in fact, according to the number one website in Spain for gifts. Aladinia.com experiences, bookings for this type of activity have increased by 80% so far this year.

It is a relatively recent modality in Spain, which began to become popular in the mid-1980s and has various places throughout the entire geography to be able to practice it. They are usually carried out in sections of between 10 and 35 kilometers and each raft carries a maximum of 10 “rowers”. The rivers and sections in which it is practiced have a rating from 1 to 7, depending on the degree of difficulty, although this may vary depending on the time of year in which it is practiced.

No special physical conditions are required, but the presence of a monitor who acts as a helmsman and is in charge of giving instructions to the rest is essential. It is not a dangerous sport but you have to take precautions.

According to the experts at Aladinia.com, there are some essential tips to follow:

The descent must be done with an accredited company and with experts who know the sections of the river and its currents. The river is a body of water in motion that requires quick and accurate decisions. It is convenient to wear a wetsuit since the waters are cold and have spare dry clothes to change when you finish. It is essential to wear a PFD lifejacket and a helmet, which are usually provided by the organizers. In the event of a fall (practitioners usually sit on the edges of the raft) try to hold on to it and, if this is not possible, let yourself float with your body upwards with your arms crossed and your feet in front to remove possible obstacles, avoid putting your feet on the ground until there is an area of ​​calm water. In general, the instructors carry a safety rope that they throw to rescue the castaway.

There are many places in Spain where you can go rafting. For this reason, the users of Aladinia.com have selected the best in Spain, assessing the speed, waves and difficulty of the sections as well as the services offered by the organizing companies. Of course, all of them can be presented as a gift. And the Noguera Pallaresa river in Lleida has been selected as one of the best in Spain to practice this sport:

The descent down the Noguera Pallaresa is one of the most attractive in Europe, and although it has several sections, the most popular is Llavorsí – Rialp, one of the most exciting for its rapids, about 14 kilometers long. The Rafting Llavorsí company proposes an adventure descending the rough waters of this river in an inflatable boat, with the help of oars, avoiding the rocks on the way and avoiding falling into the water at all times. The capacity of the boat is eight people, who sit on the edges. On the ground, the crew members have foot restraints, making it really easy to maintain balance when the waves and sudden movements of the current arrive. The exciting journey is made in the company of a monitor who is placed in the back of the boat to pilot it. Its function is to set the course with the oar and give the necessary instructions to the rest of the group to advance down the river, the routes are full of surprises, with multiple jumps and plunges.

These are the rest of those selected by Aladinia.com users:

The rivers of Cantabria are mighty paths that make accessible the most remote corners of the Valleys of Cantabria, Picos de Europa and the deep Ebro Canyons, in a spectacular setting. Rafting in Cantabria runs along the Ebro and consists of several sections to choose from depending on what you are looking for, more emotion, children’s level, there is even a full-time rafting to spend all day on the river. In river descent there is a widely accepted international classification to classify rivers according to their degree of difficulty when navigating them, in Cantabria in the Ebro and Deva rivers it is classified as: Class III with specific steps of class IV. The Cares River contains Class IV rapids, being one of the bravest descents in Spain. The proposed section is from Arroyo to Aldea de Ebro, 10 km long and lasts 3 hours and a half. The adventure, carried out by H2UR, costs 35 euros per person.

Rafting is a team sport, where the crew of the raft paddle and direct their weight in a coordinated way to go through the rapids and stay afloat. It is the star modality of adventure water sports. In this Kalahari adventures proposal, you descend through the rough waters of the Cabriel River in a pneumatic boat guided only by oars. Its classic proposal is for a section of 8 kilometers, but it also has another called Rafting de luxe, which suggests a different way of descending the Cabriel, spending the day on the river. No rush and enjoying each stretch and each rapid. It is done at midday so as not to meet the rest of the companies that work on this section. They eat halfway along the river, with cold dishes, and replenish their strength to descend the best part of the section, with a total of 12 kilometers. In this last section you can practice snorkeling, taking advantage of the clean waters of the Cabriel River, in a small canyon. With fantastic underwater images that will make the descent a real delight.

This experience takes place in a Pyrenean river that passes through Murillo de Gállego, a small island in Zaragoza within the province of Huesca. The Gállego River Canyon begins just after the Pantano de la Peña dam. A descent of more than 11km during a morning of waves and big water. The unevenness makes this section an activity for adventurers, wanting excitement. The descent begins with one of the most exciting steps of the level IV river that prepares for the next section in which the river is channeled between walls and the waves follow one another while the team tries to take the controls of the raft rafting, They follow different rapids until they reach “El embudo”, a rapid with a difference in level and special strength. During the descent, jumps into the water are made, boarding other boats and above all enjoy the splashes and the big waves that are found during the descent.

The descent will take place in the Segura River, which runs through some of the places with the greatest ecological value in Murcia. First of all, the basic notions for handling the rafting raft are taught so that the descent is as good as possible. Immediately after, he gets on the raft with colleagues who will row as a team to go down the river in the best possible way. During the journey you have to enjoy the riverside vegetation and the typical fauna of the area. The tour begins in Cieza and almost immediately you will be able to see its famous mountain, La Atalaya, which rises above the town due to its verticality and its emblematic castle and ruins of the Muslim city of Medina Siyasa. The great Menjú in Abarán, a stately estate from 1908 forgotten in time, one of the hidden wonders with its own microclimate and vegetation. Halfway through the tour there is a break in Abarán, in a place called “El Jarral” where you can enjoy an optional lunch with a sandwich of homemade bread, soft drinks, beer, water and a surprise drink. There you can optionally feel the adrenaline of one of the steepest descents of the route and take a bath in the Segura River. Afterwards, continue along the cane field towards Blanca, a very quiet area where you can bathe. All this adventure will be photographed from start to finish by a highly experienced photographer who will provide a quality report with more than 300 photos and more than 15 different points of view.

The company Ocio Aventura Cerro Gordo proposes starting from Cuevas Bajas, a municipality in the north of the province of Malaga, a privileged enclave that is located on the banks of the Genil River. It is a complete section of eight kilometers in which you can enjoy the waters of the Genil River, the second longest in Andalusia that flows into the Guadalquivir River. It is ideal in summer when the river brings more flow due to the releases made by the Iznájar reservoir (the largest reservoir in Andalusia) for irrigation. The duration is about three hours, of which an hour and a half is in the water and can be done by children over 6 years of age who know how to swim.

Mon Jul 25 , 2022
Scholtz, with his wife Britta, during an election rally. /Wolfgang Rattay/REUTERS/ Among the classified material are reports relating to the G7 summit held at the end of June in the Bavarian castle of Elmau Are the Scholz rather laid back? The question is the talk these days of the German […] 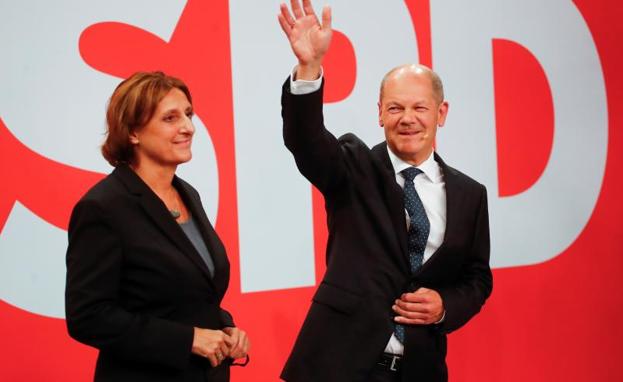