Five floors. It is the distance that separates the bunker from the floor where Yana and Tatiana prepare to receive the war. It is a house near Shulovka Avenue, a ‘stalinska’, those buildings erected in the time of Stalin that are found throughout the space of the former USSR and that in this part of Kiev are especially well preserved. They are neighbors and Tatiana has been taking care of Yana for eight months, who at 80 years old suffers from mobility problems. «She has been bedridden for two weeks, she barely gets up, she doesn’t feel like doing anything and she makes me very sad because she had managed to get her to walk a little with the help of her walker. She is a woman who used to smile a lot », laments Tatiana with her face suffocated by emotion.

While more than two million Ukrainians have sought refuge outside the country, a large part of the elderly population has no way to even leave their homes due to mobility problems. They depend on the help of neighbors and volunteers who bring them food and medicine. So far it is possible, but nobody knows what will happen when the Russian troops enter the city. Organizations such as Age Concern Ukraina try to locate those people who have been left alone and isolated, but it is a complicated task in a city where four million citizens lived.

This situation of abandonment and isolation extends to the entire central and eastern part of the country, the most affected by the conflict, from where many mothers have fled with their children. But the older ones have stayed. Trapped in their houses, waiting for an uncertain future under the sound of bombs. It is easy to imagine the drama of family separations and the fear that grows as new information about the Russian advance appears. The armored columns are already practically at the gates of Kiev and skirmishes have taken place in the surroundings.

Now Yana hardly speaks. Her eyes shine, very blue, when she speaks to her in English and, suddenly, she responds with a very thin voice in this language that she loves so much. She worked as an interpreter at the United Nations, then she was at the University of Kiev and now “I just want this to end once and for all.” She refers to the war.

For two weeks, the remaining civilians in Kiev have been living underground. Everyone fears a Russian bombardment and takes shelter in bunkers, garages or subway stops. Yana doesn’t have the strength to get out of bed, how is she going to plan to go down to a shelter every time the siren sounds? She does not do it. His room is his bunker and there a group of volunteers from the neighborhood has moved the bed away from the window as much as possible and has placed insulating tape on the windows in the shape of an X so that, in case of bursting due to an explosion, the fragments do not come out fired turned into dangerous splinters. That is her protection, along with a Bible and a painting of the Virgin.

Like Yana, thousands of people are condemned to face wars from their homes. There they wait for that Russian attack that Tatiana doesn’t want to hear about. «I spend the whole day with her, but at night fear overwhelms me and I go down to her bunker. Then I come back first thing in the morning. However, I cannot shake the anguish of knowing that she is left alone, powerless in the face of any danger », confesses the caregiver. “Let this end once and for all,” insists Yana from her bed. Motionless and pale.

Vladimir Zelensky’s daily speeches are far from the daily life of these two women. Tatiana prefers not to watch the news, the images that arrive from Mariúpol, severely punished by the bombings. She laments the ruthless destruction and sees what Kiev can be like in a matter of days if the invaders launch an all-out offensive. She also freaks out every time she hears the Ukrainian media report that hundreds of people could have died in their homes from starvation, thirst and cold because of the siege. “I pray every day not to lose the heating so that Yana doesn’t die of cold, I pray and pray,” says Tatiana as she touches the heater in the room and makes sure that it is still working. What she is beginning to run out of are the antibiotics and the diapers she needs for her neighbor.

Everyone thinks of the hours left before the arrival of the Russians. The countdown is on and the war sneaks through the closed windows of Yana’s apartment in the form of anti-aircraft sirens and explosions that, at the moment, sound distant. Although the tone of her voice is weak, the firmness of this woman is a cry that calls for the end of a war that has already lasted more than two weeks. A muffled cry from the fifth floor of a Kiev neighborhood, thrown directly into the most important offices in Moscow, where nobody seems to care about the future of all the Yana, condemned to suffer the war without being able to move from home.

Printers for Smartphone (Choose your Favorite)

Thu Mar 10 , 2022
What we most photograph memorable moments with is usually what we carry with us, that is, the mobile. That’s why I thought I’d show you some smartphone printers So that you truly immortalize them, not for as long as your device lives. In this digital age in which we accumulate […] 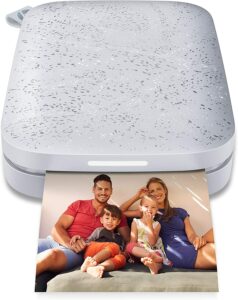