Given the recent resolution of the Supreme Court on the closure of Pascua Lama, the Mining Arbitration and Mediation Center, CAMMIN, pronounces on the need to add value to the mining industry in the resolution of disputes that conclude in value for the parties, for over any consideration and judicialization.

Santiago de Chile.- Regarding the recent resolution of the Supreme Court regarding the closure of Pascua Lama, it is not an easy case to address. From our foundational perspective, we have always been motivated to see that mining projects can advance and consolidate as such, understanding that conflict between parties and/or the authority may already be present. It is in this scenario that CAMMIN reinforces its strong foundational conviction in adding value to the mining industry in the resolution of disputes that result in value for the parties, above and beyond any consideration.

We believe that it is not our property to wield or comment on the recitals of this resolution and the history it has had in the administrative, judicial and, above all, from a socio-environmental perspective. The result is already consolidated and it is not possible to issue a legal opinion on a dispute that has already ended, whose result today becomes public knowledge.

Other companies have gone through similar situations in their brownfield projects, as is the case of Rajo Inca in relation to the Pedernales salt flat and Minera Escondida in relation to the Punta Negra salt flat, in which case there was also, at the request of the surrounding communities, the action of the authority at the highest level (State Defense Council and the Superintendence of the Environment), who had to intervene and “seat” these Companies at the table to urge them to correct their projects and define a joint repair strategy , studies and engineering (whose cost ranges between 20 and 80 million dollars respectively) to ensure the recharge of the water aquifers that were a source of supply. In fact, only these companies, however they have circumvented and/or avoided, know if they consider that in terms of reputation they may or may not have lost value.

That is why we must stop and understand that there is a potential for disputes that could be limited through a preventive approach with various mechanisms, which are part of CAMMIN’s background as a Mining Arbitration and Mediation Center. In the same way, we have no doubt that if the mining company in question and the organized community had filed the knowledge of the facts, matter of controversy, in a new, fair and honest Center, specialized in an impartial view such as CAMMIN, we would have achieved the success and consolidation of this project.

The invitation, then, is related to internalizing that controversies are managed in advance, with a high-level panel that can mediate effectively in complex cases and that, as a final result and without a doubt, ADD VALUE.

Mapi León, protagonist of the Adidas campaign for Euro 2022

Sun Jul 17 , 2022
The English artist Elena Gumeniuk has been in charge of creating the mural dedicated to Mapi León and which has been placed on Portobello Road, Notthing Hill. In the design we can see Mapi’s desire to become the reference that she has never had. (7-15-2022). Mapi León is the star […] 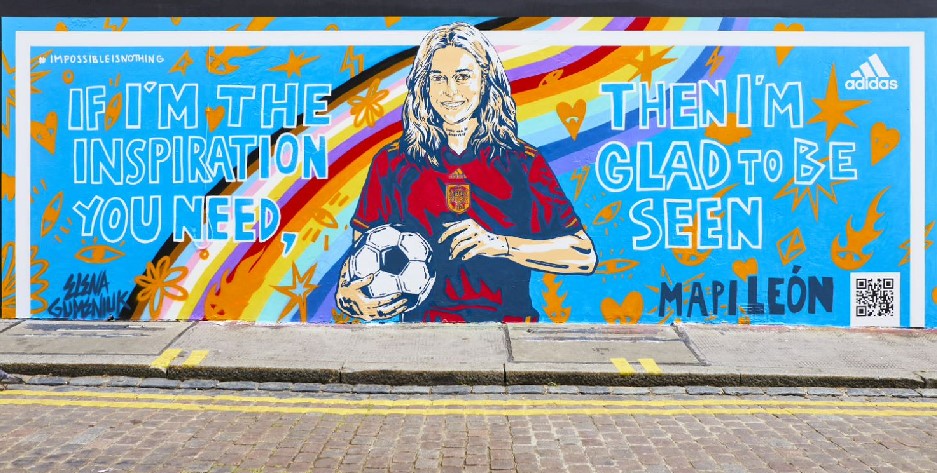