The Coma-ruga Yacht Club has suffered two attacks this week by the gang of nautical vandals.

(7-15-2022). The ‘gang of the nautical vandals’ continues to attack the beaches along the coast of the municipality of El Vendrell, especially in Coma-ruga. In addition to the launching at sea of ​​a sailing skate reported yesterday by CMDsport, there has been the disappearance of a second skate and a cayac, as well as a boat from the Coma-ruga Yacht Club sailing school.

After the ‘No Surrender’ sailboat was launched at sea during the early hours of Tuesday to Wednesday, the following morning (Wednesday to Thursday) there was a new incident perpetrated by the ‘gang of nautical vandals’. In this case, the vessels affected were another senior sailboat (with hull number 2916), which had a yellow Bic kayak chained to its deck rail. Its owner, Sònia Campodarbe, a vacationer from Coma-ruga, had both boats stranded in the same slipway where the ‘No Surrender’ was, that is, in the Coma-ruga Hostel, near the Gran Hotel Europe in that town.

However, as the affected person explains, “in our case, we do not know where the skate and the kayak are because neither of them has appeared again in the sea or on land.”

Sonia Campodarbe, who acknowledges fearing the worst about the whereabouts of her boats, planned this morning to file a complaint with the El Vendrell security forces and confessed to CMDsport that she felt “outraged by the proliferation of this type of act that is taking place this summer shooting more than the past, and powerless in the face of the impossibility of doing anything to prevent these vandalism attacks”.

Image of the devastated slipway of the Coma-ruga hostel, where you can see the collapsed awning, as well as the cover that covered the sailboat 2916, to whose cleavage bar a kayak was chained. In the background is the historic Gran Hotel Europe.

INCURSIONS IN THE COMA-RUGA YACHT CLUB

But the performances of the band of the nautical vandals would not only have taken place during this week in the mentioned slipway of the Coma-ruga hostel. As explained to CMDsport by the director of the sailing school of the nautical club of that town, Xavier Vives, “during the night from Tuesday to Wednesday (the same as the ‘launching’ of the ‘No Surrender’) they entered the slipway of the port of our club and they stole a boat from the sailing school, specifically an RS Tera”. This type of boat has a length of 2.87 meters, a beam of 1.23 meters and its weight is 43 kilograms. As in the case of the 2916 sailboat, this RS Tera has not reappeared, neither at sea nor on land. However, Xavi Vives maintains that “very likely, by not wearing the caps, if she was thrown into the sea, she must surely have sunk.”

That incursion of the band in the slipway of the sailing school of the Club Náutico Coma-ruga has not been the only one this week. The following dawn (from Wednesday to Thursday; the same as the disappearance of skate 2916 and the kayak chained to its cleavage bar), the band performed again and in this case their ambition went further. According to Xavi Vives, “that night they tried to take two Optimist and two other RS ​​Tera”.

This time, however, there was more luck. The entity’s sailor who was on duty that night managed to intercept the band when the four boats were being taken away, each one on its respective dry dock trailer. The night watchman chased them, stopped them and, finally, the thieves chose to leave the boats and flee.

Later, at the request of the security guard’s description, the municipal police managed to locate one of the members of the gang. However, nothing could be done to hold him back.

The director of the Coma-ruga Yacht Club sailing school, Xavi Vives, declared that “we know who they are. They are young North Africans who dedicate themselves to practicing ‘bottle fun’ which is nothing more than pure and simple vandalism; they take the boats to play in the sea and then they abandon them”.

You live has assured that now they have the boats chained. Asked about the police action, he explained that “they tell us that if we want to file a complaint, but against whom do you file it if you don’t catch them ‘red-handed’? The truth is that we feel immersed in total and utter impotence.” 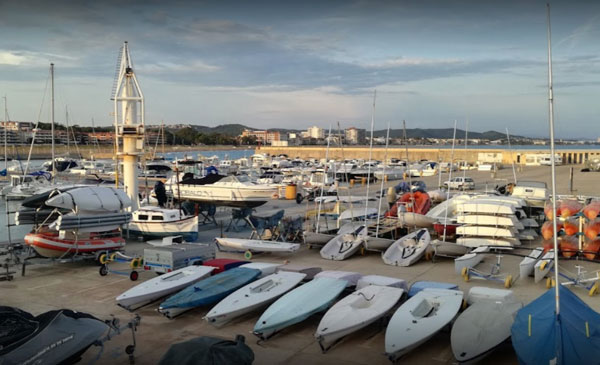 Image of the sailing school of the Coma-ruga Yacht Club

Vives explained that they have spoken with the El Vendrell councilor for beaches, Bárbara Peris, “and we trust that she will give the pertinent orders to increase police surveillance in the area and that this will dissuade these people.”

As published today by the Diari de Tarragona, the aforementioned councilor affirms that “this year there are no bottles of last season.”

However, the neighbors who live on the front line assure that these concentrations of people continue and they fear that causing damage to boats will become a ‘fashion’.

Last summer, canoes and awnings were thrown into the sea…

Although perhaps not as serious as the case of the Club Nàutico Coma-ruga, it should be remembered that, as CMDsport reported yesterday, the Club Nàutic Sitges has also suffered the effects of acts of vandalism caused by ‘bottle meetings’.

On the night of Tuesday to Wednesday of this week, an Omega-type monoship from the sailing school of said entity was launched into the sea with half a sail hoisted and it was stranded on the rocks of the club’s eastern breakwater. Luckily, the boat did not suffer serious damage, according to sources from the Club Nàutic Sitges.

Fri Jul 15 , 2022
Compartir Tweet Compartir Compartir E-mail The President of the Republic, Gabriel Boric, together with Minister Carlos Montes, announced the plan that seeks to address with a sense of urgency the housing demand in Chile of nearly 650,000 homes in the next four years. […]