José Luís Rubayo, president of the Madrid Mountaineering Federation (FMM), underlines that the decision to leave the issuance of the Fedme license to the discretion of each of its federates was approved unanimously at the FMM assembly.

(23-2-2022). The Madrid Federation of Mountaineering (FMM) defends itself after the statement from the Spanish Federation of Mountain and Climbing Sports (Fedme), in which it announced that Fedme licenses in the Community of Madrid have fallen by 81% this 2022. The Federation Autonómica assures that it now offers “freedom to the federated” to choose the Fedme option, and that it does not put “obstacles” on its processing.

The Madrid Mountaineering Federation (FMM) has sent CMDsport its disagreement with the Fedme statement, also published in this medium, announcing that national licenses in the Community of Madrid have fallen by 81% this 2022. In it, it was denounced that the FMM had automatically renewed the licenses of its members, without including the Fedme extension, and without giving notice of it.

In this sense, José Luis Rubayo, president of the FMM, has stated that “the decision to process the federative licenses in 2022, offering the federated the freedom to choose the FEDME option, was unanimously approved successively, first by the Board of Directors, by the Delegate Commission, then and finally within the General Assembly of the FMM and always, I repeat, unanimously”.

Some agreements, he adds, that were communicated through the FMM media such as social networks, the internet, communications to the clubs, processing regulations or newsletters, among others.

NO OBSTACLES TO PROCESS THE FEDME LICENSE

Rubayo also wanted to clarify, “categorically”, that the FMM has not put obstacles in the way of processing the Fedme licences. As he explained, “when processing the domiciled federative cards, (more than 9,500), the option is given, as it cannot be otherwise, that the federated renew in the same terms as last year or vary as much as they want. This year, being the first to give the option of having the Fedme extension or not, the option was clarified in a particularly clear way”.

The president of the FMM adds that “the federated can extend or change the initial modality of their license at any time of the year electronically on the federation’s website through their ‘Personal Area'”.

Finally, he affirms, “we are not aware of the complaints that the statement claims to have, since none of those alleged injured Madrid athletes has contacted the federation or its clubs.”

THE FMM IS AROUND 23% OF FEDME LICENSES

According to the data provided by Fedme for this 2022, the 3,371 Fedme licenses processed in the Community of Madrid represent 23% of those processed by the Madrid Federation. And comparing this figure with the complete data for the year 2020, the last official ones, and the sources being the Fedme yearbook and the Higher Sports Council, that 23% is close to the level of federative cards processed by other Federations such as Andalusia ( 25.89%), the Catalan (25.91) or the Basque (28.79%).

Kiev calls on the Ukrainians to take up arms

Wed Feb 23 , 2022
A group of civilians are trained in the use of assault weapons, during a training day in Kiev. / EFE/Video: EP In an intense day, the Government declares a state of emergency, mobilizes reservists and empowers civilians to dispose of weapons Kiev passed this Wednesday from words to deeds. After […] 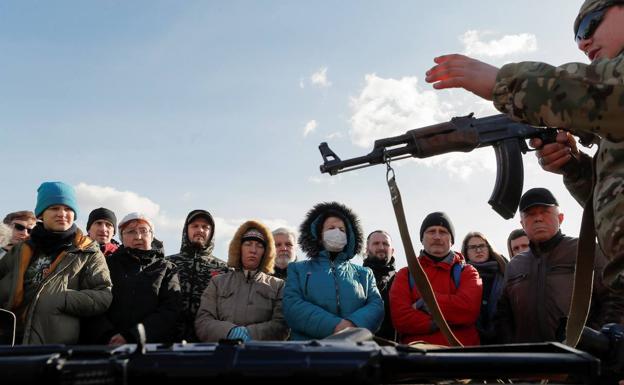