The President of the European Commission, Ursula von der Leyen, announced the agreement between the EU and the countries of the Iberian Peninsula

(26-3-2022) Spain and Portugal may temporarily limit gas prices. Both countries closed an agreement with the European Union that the European Commission must ratify in the coming days. The measure will affect both companies and individual consumers.

Sports centers with swimming pools and other spaces that require large gas consumption could soon see their energy bill lowered. Last Friday, the European Union recognized the “uniqueness of the Iberian Peninsula” within its energy policy and agreed with Spain and Portugal that both countries could limit the price of gas as they had been demanding.

“We have agreed on a special treatment that is possible for the Iberian Peninsula so that it can deal with this very specific situation in which it finds itself and manage electricity prices,” explained the president of the European Commission, Ursula von der Leyen.

“Meet expectations. With this we will be able to establish a reference price for the gas with which electricity is produced, which will mean a drop in prices”, celebrated the Spanish president, Pedro Sánchez. The Spanish Executive expects the price of gas to drop rapidly on the bill. The declines could begin to be noticed within three or four weeks.

The application of the agreement will not be immediate, but it could arrive very soon. Beforehand, both countries have to present to the European Commission the specific measures they want to take to lower the price of gas by putting a limit on its price. The measures that are taken have to comply with European law, although the Commission has hinted that it will accept the measures that are proposed when they arrive. Although Brussels is committed to examining this request urgently, its approval will not arrive until the last week of March. It has not yet been specified what will be the ceiling that the price of gas will have from now on.

In recent weeks, the Spanish employers of gyms, Fneid, had demanded from the Government urgent measures to stop an energy crisis that has put some important gym chains with large sports facilities on the ropes and that has even forced them to close Numerous pools and water areas.

The reduction in the price of gas will allow the cost of energy both for private consumers and for companies. It should be noted, however, that the measures taken in the coming days will be temporary. It is still unknown, on the other hand, how the compensations that the Executive will give to companies that generate electricity through gas in combined cycle plants will be financed.

Found the second black box of the crashed plane in China

Sun Mar 27 , 2022
Rescue services in the area where the plane crashed in China. /REUTERS The Chinese authorities have confirmed this Saturday the death of the 132 passengers and crew of the aircraft that crashed last Monday EP Sunday, 27 March 2022, 07:37 The second black box of the China Eastern Airlines plane […] 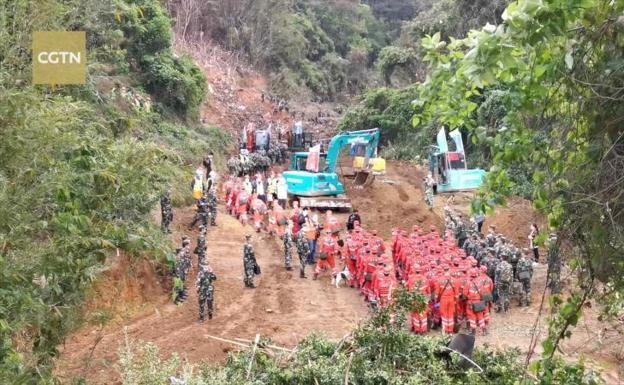