(21-6-2022) The Spanish Olympic Committee explains the reasons that have led to the failure of the candidacy project for the 2030 Winter Olympics, while being in favor of keeping the dialogue open with the different parties to be able to organize an event of this type in the future.

The president of the Spanish Olympic Committee, Alejandro Blanco, has explained to the media the process that the Olympic candidacy project that they were going to present for the 2030 Winter Olympics has undergone and that ultimately it will not progress due to the lack of agreement between the Government of Aragon and the rest of the parties involved. “The technical debate was productive, but when the political leaders came in, there was no progress,” Blanco criticized.

The president of the COE has read a joint statement issued by the COE and the IOC in which he expresses the will, “without commitment and without specific edition”, to continue working with the commission of future venues of the Winter Games, with a view to the celebration of an event of this type in Spain, a country that “at the present time, is not in a position to present an Olympic project”.

The leader has made self-criticism, assuming that the one in Spain is not “the best technical project for an Olympic bid because, according to the IOC, we cannot make large investments, so that the jumps and other tests must be transferred to others countries with which there was no agreement. However, Blanco has defended that the Olympics could serve to “regenerate a territory” and, above all, the possibility of acting as a “meeting point”. “Having a place to listen to society without political tensions gave this candidacy a strength that no other had”, he has developed.

“This technical commission met seven times between December 21, 2021 and March 22, 2022; at the end of which a technical agreement was reached that was communicated to the governments involved, whom we invited to a meeting”, Blanco added. Aragón had 54 events and 2,168 athletes, compared to 42 events and 2,520 athletes in Catalonia. More tests in Aragon and more athletes in Catalonia.

“We called the meeting and, three days later, the president of Aragón announced that he did not agree with that distribution agreed by the technical commission, although it is necessary to point out that the snow proposal, which is the great object of dispute, was made the Aragón technicians”, he added. In the following meetings there was no agreement to ratify the distribution of seats. “The COE presents the candidacy and the Government of Spain supports it, but the logical thing is that the regional governments agree beforehand,” Blanco lamented.

In one of the meetings, Catalonia proposed to send five more tests to Aragon. In exchange, five figure skating events went to Catalonia. In this way, the same distribution of tests was maintained. This proposal, however, was not accepted by the Government of Aragon. This one proposed, in the last meeting, a separation of tests by batches, which separated the events by sex, something that Catalonia did not accept.

The COE assembly tried until the last moment an Olympic candidacy for 2030. After not reaching an agreement, they ruled out this project.

Tue Jun 21 , 2022
One of the sessions of the special congressional commission investigating the assault on the Capitol. / ef The White House intended to replace Biden’s delegates with their own in order to object to the official results and refuse to formalize the replacement in the US presidency Donald Trump pressured personally […] 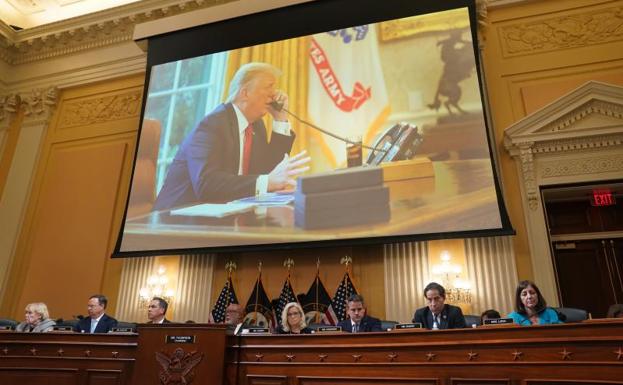