Th Monday Battle, the initiative that moves boxing evenings to the theater, celebrates its third edition this Monday, May 9, at the Lope de Vega theater in Madrid. An evening that seeks to show boxing in a totally new way.

(6-5-2022). The boxing evening The Monday Battle is gaining more and more followers and lands at the Lope de Vega theater in Madrid with a third edition that is expected to have an attendance of 1,500 people. The event has the support of brands such as Voll Damm, JD Sports or Nocco, in addition to Movistar +, which will televise the event.

The Monday Battle will celebrate this coming Monday, May 9, a new edition. The event that combines boxing with entertainment and fashion reaches its third edition with a change of location, since it changes the Nuevo Alcalá theater in Madrid, which hosted the first two editions, to be located in the middle of Gran Vía.

The venue chosen is the Lope de Vega theater, continuing with the objective of placing these special boxing evenings in the most emblematic theaters of the capital. The event, organized by the boxing brand of the Altafit gym chain, The Boxer Club, together with OSB Promotions, seeks to “offer top-level boxing, mixing it with fashion and show, in a location in the purest Broadway style.”

Boxing is a trend and schools like The Boxer Club and other fitness-related initiatives that have given way to fitboxing are helping to generate an interesting hobby around this sport, giving rise to more and more people interested in getting out of boxing. gyms to see your favorite fighters in action.

Movistar will televise the boxing party

On this occasion, The Monday Battle will be sponsored by Voll Damm, the Nocco energy drink, JD Sports, the Madrid restaurant Pante and Everlast, in addition to the support of the Pugil tailor shop, the Atom motorcycle accessories brand, and the City Council of Madrid that joins the event, coinciding with the appointment of the World Capital of Sport 2022.

Likewise, this third edition also has the interest of Movistar Plus, which will televise the evening, first live on the Sports Channel, from 8:45 p.m., and delayed at 10:30 p.m. on #Vamos, within the # eveningsMovistasPlus.

Boxing is the central axis of The Monday Battle and, for this reason, he will once again bet on Jennifer ‘Tormenta’ Miranda. The Cadiz boxer, resident in Madrid and trained by Javier Pardo at The Boxer Club, will seek her seventh victory with a clear objective: to become world champion. Another undefeated Damián Biacho ‘Guinea’ will participate in the pre-match fight, who will return to the ring after his impressive victory in Bilbao against Guillermo Rivero. The talented fighter who plays in the super middleweight will seek his thirteenth victory in the professional field.

The protagonists who will start the evening will be Enrique ‘El Magnifico’ Florentino and Rogger Smith Rivera. The Asturian Florentino from The Boxer Club – Asturbox, debuted on December 12 with a victory by technical KO in the third round against Adrián López in light weight. Rogger Smith, boxer from The Boxer Club – Castelo, amateur champion of the 2018 South American Games, made his professional debut on the same evening organized by The Boxer Club, beating Carlos ‘Charlie’ Álvarez by unanimous decision.

In addition, the evening will be enlivened by Mirko Callaci, the most awarded magician in the world, who has performed in more than 40 countries and has an act mainly marked by its originality, simplicity and emotion. His performance will be one of the highlights of the evening in which there will be “more surprises”, according to the organization.

The speaker of the evening will be the journalist Marco Rocha, known for presenting the Moto GP World Championship in 2015 and being part of the special envoys who narrated the historic victory of Spain in the World Cup in South Africa. Rocha is also a regular master of ceremonies and presenter of events of various kinds. Accompanied by the journalist from the newspaper AS and DAZN commentator Álvaro Carrera who was already present in previous editions.

We will not have to wait to see the outcome of this evening to find out the future of The Monday Battle, and it is that according to sources to CMDsport, a fourth edition has already been confirmed. Boxing will once again be the star of another Monday in the Madrid capital, and it will predictably be next October.

Sinn Féin wins the elections but will not govern Northern Ireland

Sun May 8 , 2022
Michelle O’Neill (left) and Sinn Féin leader Mary Louise McDonald celebrate the results of the Northern Ireland election on Saturday. /REUTERS The heirs of the IRA confirm its effectiveness but unionism will boycott autonomy to force changes in the borders with Great Britain required by the EU Sinn Féin, historically […] 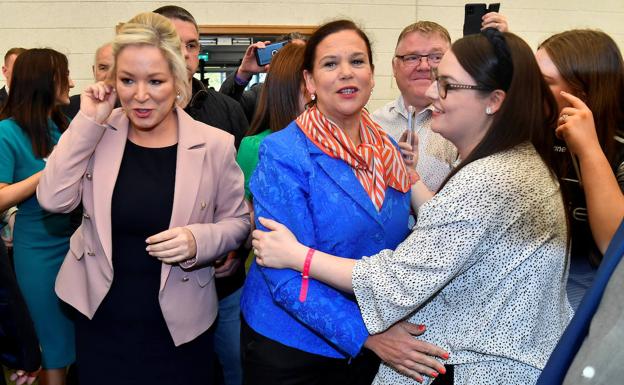