The registration form for the 2022 Spanish Senior Sailing Skate Championship can be found in one of the subsections included in the Regattas section of the Club Patí Vela Barcelona website.

(25-2-2022). Entries have just opened to take part in the 2022 Spanish Senior Sailing Skate Championship. In principle, being outside Catalonia, both first and second category skaters can take part in it.

OPEN TO FIRST AND SECOND

In principle, as it is held outside of Catalonia, both first and second category skaters will be able to participate in it. In any case, it should be noted that, as stated in the Notice of Race, “The registration of each sailor must be endorsed by their regional federation.”

Entries for the 2022 Spanish Senior Sailing Skate Championship can now begin to be formalized. Registration fees per sailor have been set at 70 euros. And they must have been formalized before 10 pm on March 25, 2022.

The organization reserves the right to admit any registration after this period, although this will entail a surcharge of 25 euros.

Initially, 8 sleeves are scheduled to start on April 14. From the day before (April 13) the participants will be able to register and proceed to the equipment control scheduled by the organization. Emphasize that no boat will be able to compete using equipment that is not properly sealed and the participants must present all the equipment that they will use in the regatta for inspection.

Likewise, during the days of regatta, measurement controls may be carried out at any time.

No more than two heats will be held each day and on the last day (April 17) no sign of attention will be given after 4:30 p.m.

The 2022 Spanish Senior Sailing Skate Championship will be sailed in a single group, except if there are more than 70 registered. If the case arises, the organization indicates that “the fleet may be divided into two groups, sailing a Qualifying Series and a Final Series. The system will be described in the Sailing Instructions”.

The organization makes available to the participants the possibility of contracting transport and accommodation for the 2022 Spanish Championship of senior sailing, through the collaborating agency Pol Viajes.

Once the registration for the championship has been correctly processed, the aforementioned agency will contact the sailors to offer the special negotiated rates and their requirements, providing a reservation form that must be filled out correctly.

The dates of the special rates will be:

To confirm the reservation, it will be necessary to pay in full, being special non-refundable rates. The agency will attend to the requests in order of arrival of the forms until the end of the quota of the special rates.

The agency will be able to attend requests for tailor-made trips, but they will be excluded from the special negotiated rates.

The special negotiated rates for Ferri Baleària transport with departures from Barcelona and Denia are detailed below:

The special rates negotiated for accommodation will range between approximately 90 euros and 250 euros per night, depending on the type of accommodation chosen (hostel/hotel, apartment or house).

From the organization they emphasize that no request will be attended without prior registration in the championship.

PRESENTATION OF THE CHAMPIONSHIP

This afternoon, at 6:30 p.m., the official presentation of the 2022 Spanish Senior Sailing Skate Championship is scheduled. The event will take place in the Red Fish restaurant located in the Club Paí Vela Barcelona facilities.

It is expected that in said act the distinctions of the class will be delivered to the skaters who this year 2022 begin their journey as first-class skippers.

Putin and the world of yesterday

Sun Feb 27 , 2022
Launch of an intercontinental missile during an exercise by the Russian Strategic Deterrence Force on February 19. / afp Its aim is to challenge the rules-based international order. Throw all the pieces on the board to restart the game with rules from another century ARANCHA GONZÁLEZ LAYA Former Minister of […] 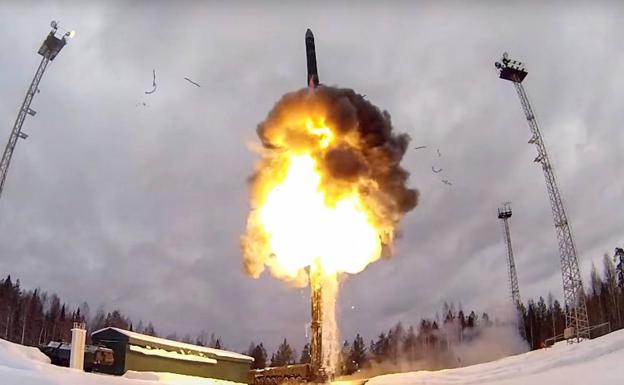