The collaboration between VRM and Chromia will create unprecedented virtual experiences for fans and a new form of entertainment for fans and leverage of investments by sponsors.

(10-6-2022). The Swedish ChromaWay leads the investment round of the sports technology company VRM, allocating 2 million euros that will be used in the creation of content in the metaverse, NFT and games.

The Swedish company ChromaWay, an international leader in the world of blockchain, breaks into the sports industry and does so by leading the investment round promoted by the Spanish sports technology company VRM.

Specifically, the Swedish giant has invested 2 million euros, which will be used to jointly develop new opportunities in the creation of content for the metaverse, NFT and games.

The young Spanish company VRM (Virtual Real Management), which is based in Barcelona, ​​has become in just a year and a half a key player in the metaverse market in Europe, since, at the moment, it represents more than 50 brands and accumulates more than 150,000 users.

VRM has collaborated in recent months in the creation of NFT and/or virtual content for several top-tier partners, such as Turkish Airlines EuroLeague Basketball, LaLiga, Roland Garros and F1 Virtual Paddock Club. The latest milestone has been the pioneering creation of the “Trophy and Rings” NFT collection to honor the champions of the recent Euroleague Basketball 2022. The collection offers fans a new way to interact with their favorite players and teams through from the web3 www.euroleagueland.com.

ChromaWay’s investment in VRM reaffirms the position of the Swedish multinational in the international sports industry, which will allow the development of new projects linked to the world of sports and blockchain technology.

The Swedish company, with its Chromia blockchain, has created nearly 1,000 million euros of value among the projects that are being developed on it. Chromia was specifically designed to address the shortcomings of existing platforms: poor user experience, high transaction fees, frustrating experience for developers, and poor security. This allows developers to scale decentralized applications to millions of users as if they were traditional applications.

From now on, VRM’s experience in virtual events and its contracts with massive and exclusive sports competitions, together with the technological power of ChromaWay, will mean the creation of unprecedented virtual experiences for fans and a new form of entertainment for fans and leverage of investments by sponsors.

“ChromaWay joins the exclusive rights of VRM, not only as an investor, but as a technological partner for the development of a multitude of solutions and content in a world that has only just begun and is here to stay”, Juan assessed. Mari Guillot, CEO of VRM.

For his part, Henrik Hjelte, CEO of ChromaWay, has highlighted that “VRM has achieved an impressive list of clients and is at the forefront of both licensed NFTs and the rapidly expanding virtual experience market.” “We believe – he added – that our blockchain technology, along with VRM expertise, can be combined to create next-level experiences that will delight end users and customers alike.”

Sun Jun 12 , 2022
The students of the Uvalde school escape from the shooter with the help of the police. /Reuters The principle of agreement signed by twenty representatives limits the access of those under 21 years of age Twenty senators, ten Democrats and as many Republicans, put US gun legislation on the path […] 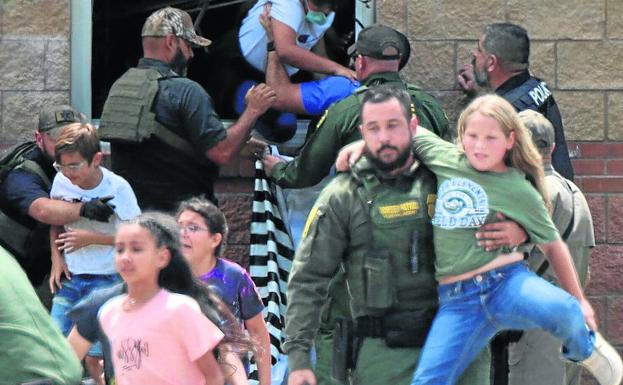