Image of the exterior of the new Sprinter store in Talavera de la Reina.

(27-5-2022). Sprinter has opened the doors of three new stores in Talavera de la Reina, Figueras, and an international opening in Amsterdam. Throughout 2022 a total of 12 more openings are planned.

Sprinter, the sports retailer, has opened three new stores, two in Spain, specifically in the Los Alfares Shopping Center in Talavera de la Reina and another in the Nou Center in Figueras, in addition to an opening in the Netherlands in the city of Osdorpplein . Between the 3 stores, 55 jobs will be created and they will add a total of 1,560 m2 of surface.

The new Sprinter store in Talavera de la Reina completes the offer of the Los Alfares Shopping Center with the most innovative proposals for the practice of sport, with an exclusive selection of the leading brands in sports clothing and equipment. This opening has created 17 jobs, in a job offer to which more than 1,000 people signed up, with contracts from 12 to 30 hours a week. The new store has 426.47m2 of retail space and a warehouse.

Regarding the opening in Figueras, the new Sprinter store is located in the recently renovated Nou Centre, with more than 13,000m2 of commercial space in the Alt Empordà region, it has 426.64m2 and a workforce of 18 workers.

On the international scene, the opening of Osdorpplein is the second of a Sprinter store in the Dutch capital, with 707.30m2 of retail space and warehouse, and 20 new employees in the vicinity of the University of Amsterdam, a district with 32,300 inhabitants.

Fusion in the purchase

The new Sprinter stores allow the fusion between physical and online shopping that materializes in a collection point Click and collecta free delivery service for online purchases, and the marketplace kiosk with 60,000 sporting goods just a click away for those who cannot find what they are looking for in the store and want to purchase the desired product online with the assistance and guarantee of the team by Sprinter.

Throughout 2022, the opening of a total of 13 new stores is planned in various parts of the national territory and 2 in the Netherlands.

Biden calls for a "safer" America

Sun May 29 , 2022
President Joe Biden and his wife, this Sunday in Uvalde (Texas) to remember the victims of the child massacre. / J. ernst / reuters The President and the First Lady visit the Texas town of Uvalde to comfort the families of the victims of the school massacre Six days have […] 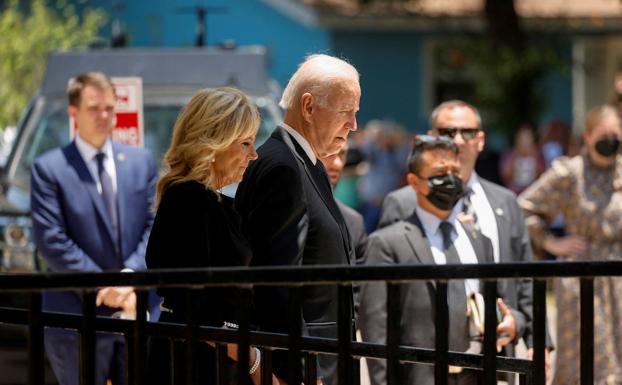