(21-7-2022) The Argentine player Sanyo Gutiérrez, current number 6 in the World Padel Tour ranking, has signed for Sioux. The agreement with the Spanish brand specialized in paddle tennis, to join Team Siux, is for the next three seasons.

The consolidated player Carlos Daniel Gutiérrez Amaya, known as Sanyo, arrives at Team Siux. With numerous titles and milestones in his record, among which his no. 1 in the world ranking in 2018, the Argentine is committed to achieving new achievements with Sioux.

Born in San Luis (1984, Argentina), he started playing paddle tennis at the age of 11. At 15 he was already competing on the professional circuit and in 2006 he moved to Spain with a clear goal: to become one of the best professional padel players in the world. In 2007, the Magician from San Luis reached the quarterfinals of the Padel Pro Tour circuit and since then his career has not made
more than grow.

Many are the titles he has to his credit. He won first place in various tournaments such as Valencia, Malaga, Madrid and Seville, among others. He was crowned number 1 in the world ranking of the World Padel Tour in 2018, this being one of his greatest achievements. With 37 tournaments won, Sanyo is positioned as the third player who has won the most competitions on the World Padel Tour.

Signing for three seasons, the number 6 in the world ranking explains why he has chosen Siux: “It is an innovative brand that can adapt to my characteristics and that has shown me a lot of confidence.” The player, who has just won the Open Reus Pro Pádel, Danish Padel Open, Vienna Padel Open and Valencia Pádel Open this year, bets on Sioux as the brand
that will accompany you in your next challenges.

“It is an honor to join this team of great players and players”, considers Sanyo. With athletes such as Franco Stupaczuk, Patty Llaguno, Lucho Capra, Javi Ruiz, Álvaro Cepero, Jimena Velasco, Uri Botello and Nuria Vivancos, Team Siux brings together and supports the careers of the main figures in world padel.

Siux is a Spanish brand that is part of the Pro Pádel Group, a leader in the production of cutting-edge paddle tennis rackets. It was born in 2012 with the aim of optimizing the performance of the professional game, producing rackets, textiles and accessories of the highest quality and the latest technology. Siux is the Official Paddle of the Spanish Padel Federation. It is also the official sponsor of the Francophone Padel Association in Belgium and official sponsor of the Portuguese Padel Federation.

Fri Jul 22 , 2022
A citizen protests against Brexit in the vicinity of Boris Johnson’s summer residence in Checkers. /Peter Nicholls/Reuters European authorities accuse London of violating essential parts of the agreement The European Commission announced this Friday that it has initiated a fourth infringement procedure against the United Kingdom for not applying “fundamental” […] 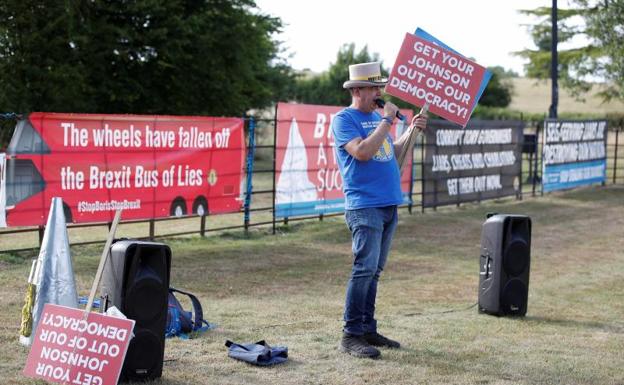