The sports pavilion has 1,100 m2 of roofed area and 1,900 m2 outdoors. Work began a year ago and it is scheduled to open this September, after an investment of 1.6 million euros.

(22-7-2022). The start of the new academic year is the date chosen by the San Sebastián de los Reyes town hall for the inauguration of the new CEIP Buero Vallejo pavilion, which will open its doors this September after a year of work and an investment of 1.6 million euros.

The start of the new school year is the date on which the new CEIP Buero Vallejo sports center is scheduled to open its doors, with which San Sebastián de los Reyes will add a new sports infrastructure.

The covered facility covers a surface area of ​​1,100 square meters and is divided into two volumes: on the one hand, the tracks and, on the other, the locker room area and sports equipment store. Next to the pavilion, it has been planned to locate nearby sports courts in the open air. In total, 3,200 square meters of spaces that, when the next school year starts, will allow the practice of different sports disciplines.

With an investment of more than 1,600,000 euros co-financed with the Community of Madrid, this new sports facility for Sanse reinforces the municipal commitment to sport, in general, and to grassroots sport, which is its hallmark, in particular. .

The building will serve both the public educational center and the sports activities promoted by the city’s clubs, in a one hundred percent accessible facility

The mayor, Narciso Romero (PSOE); the Deputy Mayor for Works and Services, Miguel Ángel Martín Perdiguero (Cs); the Councilor for Sports Ángel Buenache (Cs) and the Councilor for Education, Andrés García-Caro (PSOE), have visited the works of this new facility that already allow us to see its development in a very advanced state and how this great space will be sports, almost finished.

The mayor of the city, Narciso Romero, has stated that “this government has been able to launch a new pavilion long awaited by the neighborhood and by the educational community and, finally, we will be able to see it in operation at the beginning of the next school year, which is great news after so much waiting and neighborhood complaints”.

Works during the summer in 17 public educational centers

The members of the corporation also learned first-hand about the progress of the summer works carried out in public schools that will amount to more than one million euros. It is a double challenge, both because of the economic investment and because of the intense weeks of work to undertake 57 interventions of different significance during the absence of the students in the schools.

The Deputy Mayor for Works and Services, Miguel Ángel Martín Perdiguero, declared that “in this mandate we have tripled the investments in public schools and nursery schools, going from 300,000 euros in 2019 to more than one million euros that we are going to undertake in this 2022”, adding that “it is thus demonstrated that there is a clear commitment to dedicate efforts to improve the conditions of the activity of the educational community”.

This municipal economic effort is being made year after year through the Framework Agreement that assumes the objective of improving public buildings and that focuses on maintenance and repairs in some centers with more than 30 years of life.

Sat Jul 23 , 2022
It happens one day after the signing in Istanbul of the agreement to unblock the export of grain Two ‘Kalibr’ cruise missiles impacted this noon against the facilities of the port of Odessa, from where the Ukrainian cereal must leave according to the agreement reached yesterday in Istanbul to unblock […] 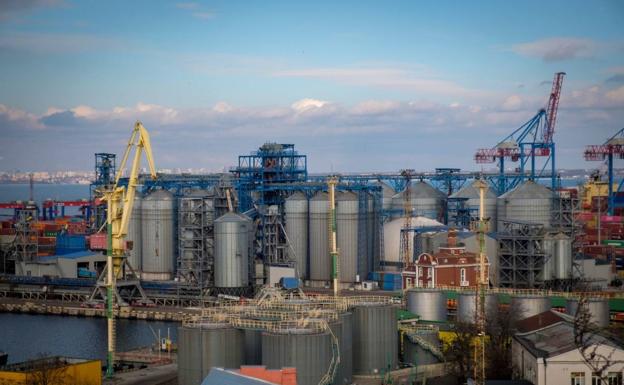