That Russia is not Putin, or that Putin is not all of Russia, is an obvious thing that at times falls prey to the polarization that tends to simplify reality in times of conflict. The Russian invasion of Ukraine has placed all the citizens of the largest country in the world before the distorted mirror provided by the Kremlin, which is solely responsible for the initiative of militarily attacking the neighboring state. From the image returned by that mirror, and from the degree of credulity of each one, come the two antagonistic visions that can be found these days in Russia.

It is a fact that Putin’s decision has divided citizens, although it remains to be seen to what extent, even though official polls, such as that of the Russian Center for Public Opinion Research, place support for the special military operation -as they call it- in 68 or 70% of the population. The supporters of the regime enthusiastically agree to collaborate in the supposedly spontaneous propagation of the official version, according to which Russia has been forced – out of responsibility, said its leader – to intervene in Ukraine to demilitarize and denazify it, two terms that share the letter Z , converted into a symbol of the invaders and associated by some of them (apparently, erroneously) to another Z, the initial of the Russian expression ‘za pobedu’ (‘for victory’).

This side has no limitations when it comes to declaring its unconditional support for the government, and its vision coincides with the one that the Roskomnadzor, the federal media monitoring service, has established as the only possible one under penalty of imprisonment. Once Dozhd’ (Rain) television and the mythical radio station Ejo Moskvy (Echo of Moscow) were eliminated from circulation, the news that is broadcast does not speak of invasion, bombings or deaths. For their part, the rectors of nearly two hundred Russian universities have aligned themselves with the government by signing a letter that scrupulously reproduces Putin’s slogans.

Opposite are those who, despite official propaganda and the absence of press freedom, have managed to obtain reliable information by other means, thus fleeing generalized intoxication, and dare to openly question the Kremlin’s position, calling things by his name and taking to the streets to demonstrate. The difference, in any case, is substantial: the pro-Putins are cheered by the regime, those who protest against the aggression are arrested and imprisoned (so far, more than 10,000). The political opposition, although gripped and practically annulled, tries to mobilize civil society through calls that come, as in the case of Aleksei Navalni, from the same prison, where he has been for more than 400 days after having been on the brink of death by poisoning. Navalni has urged his compatriots “not to become a nation under the silence of fear, into cowards who pretend to ignore the war of aggression unleashed by our obviously crazy tsar against Ukraine.” But public protest entails increasingly serious consequences for people. The mere mention of the word “war” is considered a crime.

In the field of science and culture, the response to the invasion of Ukraine has not been long in coming. On the same day, February 24, hours after Putin announced the decision, a singularly representative group of 600 scientists, academics and university professors (among them some Nobel laureates and numerous members of the European Academy and the Academy of Sciences of the Russian Federation) published an open letter in which they expressed their resounding rejection of the war unleashed by the Kremlin, their total mistrust of the pretexts put forward for intervention and their unqualified respect for Ukraine’s sovereignty and territorial integrity, a country settled, they said, “on democratic institutions that really work” and that “in no way represents any threat to the security of our country.” 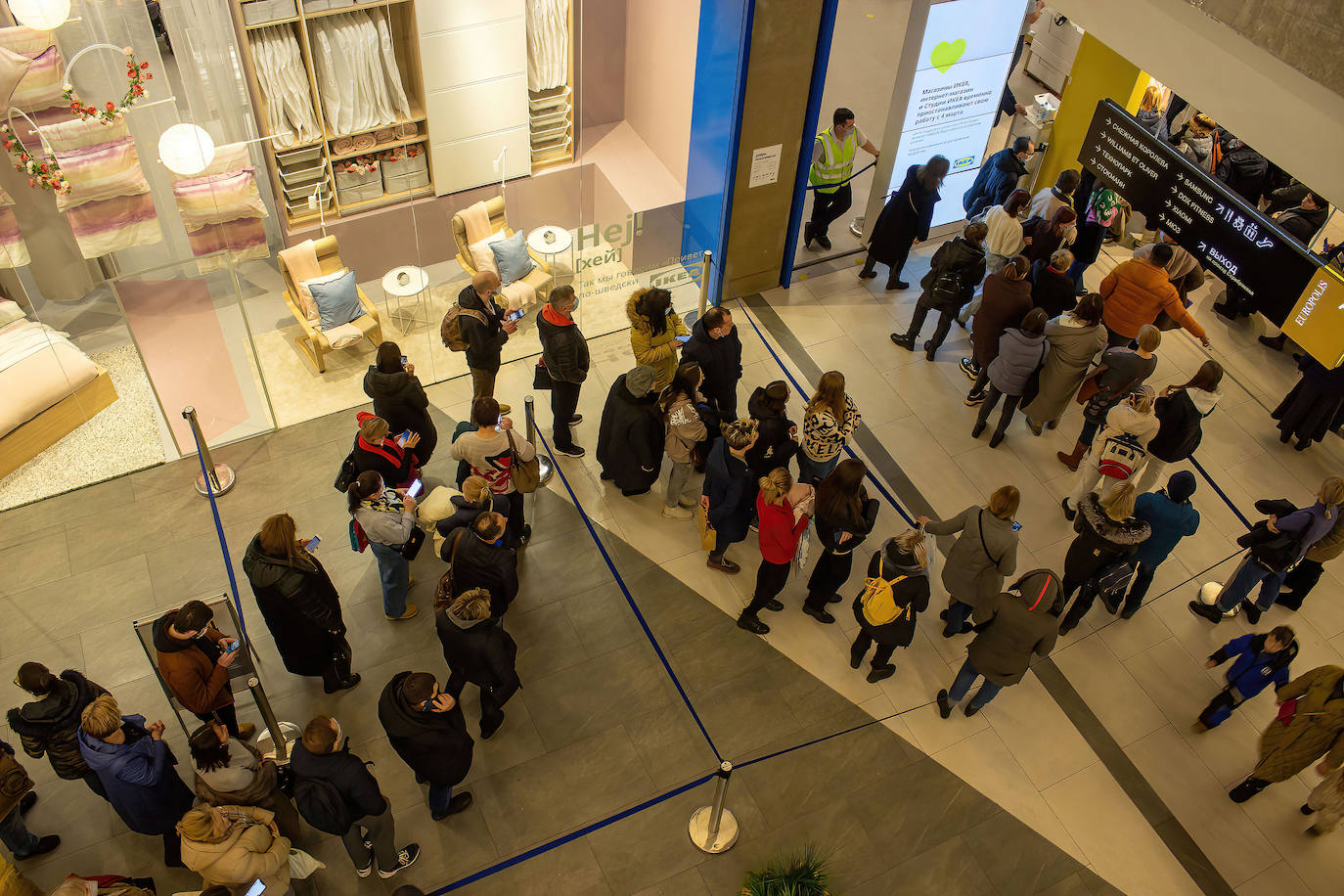 Queues at Ikea after the announcement of the closure of its stores in Russia. / DPA

The denunciation of the Russian regime, already signed by more than 5,000 experts, reached the point of pointing to the Kremlin as responsible for a “cynical betrayal of the memory of those who fought Nazism together”, committed in the name of sustained geopolitical ambitions for “historiosophical fantasies” of disastrous quality. Some of the signatories have fled Russia. In the signatures of their emails they had added messages such as “I recognize the independence of the Ukrainian people and I condemn my country’s aggression against Ukraine.”

revolt in the making

Subsequently, various groups (artists, musicians, writers) have been joining this rebellion of at least part of the citizenry, a revolt in the making that still has nothing to do with the foreseeable effects of the international sanctions imposed on the economy of Russia. In these first expressions of rejection of the attack on Ukraine, the impulse is solely ethical, in the best of the traditions of Russian humanism.

However, voices such as that of the German historian Karl Schlögel, a specialist in the time of the Great Soviet Terror (years 1937-1938), have shown these days their skepticism about a possible reaction of Russian civil society. Schlögel bases this on the essentially sleepwalking behavior that has characterized her on other historical occasions. Aleksandr Pushkin’s final remark in his tragedy Boris Godunov (1825), when, after a new violent change in power “the people are silent” (without being an acquiescent silence), he summarizes that traditional passivity beyond fiction . But it doesn’t have to always be that way.

Among the familiar faces among the Russian public who have called for a stop to the war or have described it as an intolerable crime are the popular television presenter Iván Úrgant, the tennis players Daniil Medvedev and Andrei Rubliov or the rapper Oxxxymiron, who considers, perhaps prematurely , that “the majority of Russian society is against Putin’s war.” One of the most significant supporters of the anti-invasion movement is surely that of the rock group DDT, led for forty years by Juri Shevchuk, an artistic -but also moral- reference point for several generations of Russians.

They are not, of course, the only ones who have manifested themselves and they are, as a whole, very influential personalities. Despite the repression and terror being exercised by the State, already totally totalitarian of any kind, this path of protest could end up eroding the Kremlin’s control over consciences. They fear nothing more than the freedom of the people.

A survey commissioned by Naválni’s platform, the results of which were released on March 7, records a significant daily increase in those who believe that Russia plays an aggressor role in the conflict (compared to the alternative roles of liberator or peacemaker). On February 25, it elicited 29% of the responses, on March 3 these shot up to 53%, after a gradual growth in the previous days. In addition, 79% are currently in favor of stopping the war. The poll is admittedly limited (700 responses) but free, and may be a symptom of a real trend in public opinion.

The armoring of the Putin regime on all fronts will undoubtedly hinder any hint of social reaction. But the aggression against Ukraine, in addition to blowing up the international balances, not all of them stable, that we have known in the last thirty years, has already fractured -perhaps decisively- Russian society. 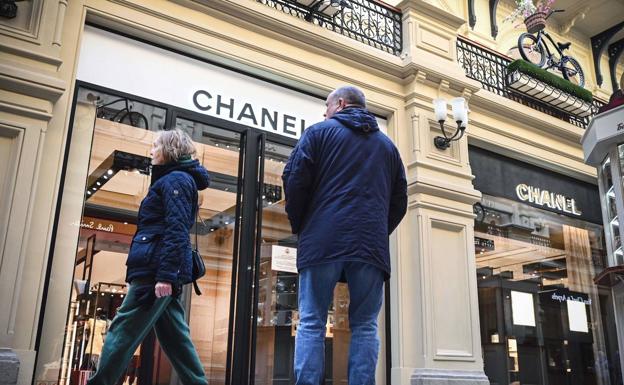 Citizens walk past a closed Chanel store in Moscow. / AFP

Some of its most lucid representatives, despite having unmitigatedly condemned the lawlessness of war, already feel the weight of the collective guilt that Karl Jaspers spoke of after World War II. At the opposite pole, others unreservedly support the drift of the Kremlin, an unbridled flight forward that seems to lead to an internal disaster that will at some point overwhelm the president and his clique, as Mikhail Khodorkovsky, a former oligarch opposed to Putin, has predicted, who kept him in a Siberian jail for more than 8 years.

The writer Maria Stepanova, whom some identify as the new great voice of Russian literature, declared a few months ago that Russia is experiencing a hijacking of history, a feeling that, with his actions and his speech, Putin has aggravated in recent weeks. to unbearable extremes. It only remains to hope that the tyrant does not also kidnap the future of the country and its citizens.

What is the Runtime Agent?

Sun Mar 13 , 2022
The Runtime Agent is defined as a Windows Task Manager process that allows you to manage permissions on your computer for Windows Store apps.Since its operation has to do with Cortana, which has already been discontinued, it does not make much sense for it to continue running in Windows 11, […]