(2-6-2022). “We are in a bit of an emergency situation” has recognized the president of the Club Mar i Vent de Canet de Mar, Rafel Farrés, before the record of 113 registered for this Senior Sailing Skate Championship of Catalonia 2022 that will be held this weekend (from June 4 to 6) in said locality.

“We expected about ninety registered and, however, the registrations have skyrocketed, completely exceeding our expectations”, Rafel Farrés, president of the Club Mar i Vent de Canet de Mar, organizing entity of the 2022 Catalan Championship of skate, has acknowledged to CMDsport. senior candle.

The director has acknowledged with a certain irony that “we are in a state of some emergency and we are putting all the talent and desire to manage this historic participation”.

Certainly, the 113 sailors who are currently registered for this edition of the Catalan title constitute a completely historic figure, not only in the competition itself, but also in the history of the class, above all because, on this occasion, participation was it only and strictly adheres to senior sailing skates and is not included, as on other occasions, to junior skates.

Rafel Farrés has stated that, at this time, the entity has put all the ‘engines’ in motion to be able to manage the high number of participants. “I have spoken with the partners, I have asked for their help and they have assured me that they will be there during the championship to be able to help in whatever is necessary”.

The president of the Club Mar i Vent de Canet has also had to request more space on the beach from the City Council to accommodate all the boats, because, as has already been indicated, until now the magnitudes of the championship had been around 90 participants.

“We are even talking to the food providers. The number of registered people means having to order more supply than we had calculated and we are streamlining procedures and processes so that everything is ready when the time comes”, explained Rafel Farrés.

The president of the entity almost takes for granted that the number of participants could be around 120 sailors.

The unforeseen magnitudes of the championship have aroused the happiness of the head of the Club Mar i Vent Canet. “We are very excited and want everything to go well,” he said. After that, he added that “with these dimensions that the competition has acquired, we will try to ensure that everything develops as well as possible for everyone and that there are hardly any errors or failures”.

The president of the organizing club has made a special request to the participants. This refers to the transport of boats to Canet de Mar.

Farrés strongly urges the participants that, “if possible, try to bring the boat to Canet de Mar tomorrow, Friday, and not to leave it for Saturday because that day, we will probably be very busy as it is the first day of the Championship. and many aspects to coordinate”.

Rafael Farrés has assured that “we will organize ourselves so that the participants can unload their boats on Friday with the help of people from our entity”.

THE CURRENT CHAMPION WILL BE

One of the latest registrations received was that of last year’s first category Champion of Catalonia, Pere Crespo, from the Badalona Swimming Club. Crespo has declared to CMDsport that “in the end, I have been able to organize myself and I will be there”. Regarding his aspirations to revalidate the title, the sailor pointed out that “I don’t know if I will be able to revalidate it, but I will do everything I know to achieve it”.

With the almost last-minute registration of Pere Crespo, in this call for 2022, the championship has the presence of the two territorial champions of the past 2021, since the presence of the aforementioned Crespo is joined by that of the champion of Catalonia in the second category from last year, Oriol Martí, from Club Patí Vela Barcelona and that this 2022 will participate for the first time as a first-class sailor.

In this way, in the 2022 edition, the complete first category podium from last year will be present, that is, the champion, Pere Crespo; the runner-up, Pau Gratacós, from Club Mar i Vent Canet de Mar; and the third classified, Jordi Aránega, from Club Marítim Cubelles. 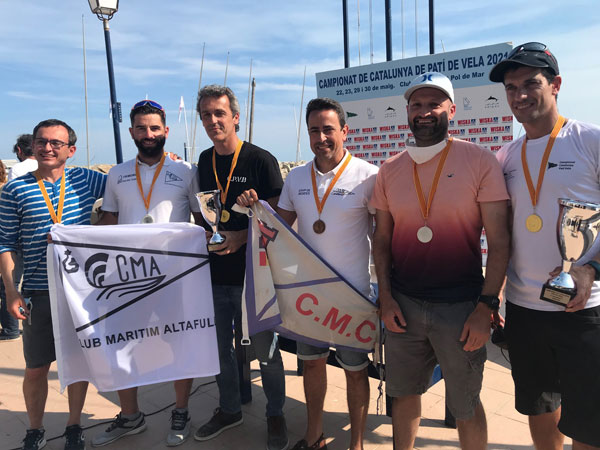 ALMOST EVERY. So far, the members of the first category and second category podiums of the 2021 Catalan Championship held in Sant Pol de Mar are registered in the 2022 Catalan Championship for senior sailing. From left to right: Jordi Giménez, Eduard Serres (he is not written -yet?-), Oriol Martí; Jordi Aránega, Pau Gratacós and Pere Crespo.

And these are the participants who have already accumulated successes in this competition, but surely there will be other top sailors who come to the event with the intention of registering their names for the first time in the list of winners.

AND ALSO IN SECOND CATEGORY

Proof of this is enough that last Tuesday, I insist, last Tuesday, at noon on the Barcelona coast there was a social regatta in which up to 40 skaters took part! Neither the first nor the second wanted to miss out on the opportunity to train.

CLASS MORE ALIVE THAN EVER

The sail skate class is more alive than ever. Proof of this is this ‘Guinness’ record already harvested by the Club Mar i Vent Canet de Mar, which sets the bar so high that, likewise, this edition marks a before and after…

Or perhaps it is a starting point in which it is verified that the sailboat class acquires an even more consistent projection than the one it already has and that makes it gain even greater power of persuasion before the federative spheres and the Catalan sport.

Below is the list of those registered so far in this Senior Sailing Skate Championship of Catalonia 2022 distributed by virtue of the club for which they will sail. The category in which they will compete is also specified.

Until now, there are 113 registered sailors, of which 55 are first category and the remaining 58, second category.

Fri Jun 3 , 2022
Compartir Tweet Compartir Compartir E-mail The Greenland island is absolutely unique, from an energy point of view too. For example, 100% of its population has access to electricity and more than 80% of its energy comes from renewable sources, while the island has […]