The President of the COFICAM College, Javier Merino Andrés.

(27-7-2022). The Professional College of Physiotherapists of Castilla-La Mancha has demanded from the regional government that the prescription plan for physical activity and exercise, known as ‘Sports Recipe’, be carried out by health professionals.

The Government of Castilla-La Mancha announced at the end of May that it was working on a project so that doctors can prescribe physical exercise (known as ‘Sports Prescription’) for patients with pathologies or for their prevention. Said physical exercise of the patient would not be carried out by health professionals, but by graduates in Physical Activity and Sports Sciences. Something that is opposed by the Professional Association of Physiotherapists of Castilla-La Mancha (COFICAM).

The President of the COFICAM College, Javier Merino Andrés, explains that they have “met with the Minister of Health of Castilla-La Mancha to address, among other issues, the request that was made to be the physiotherapist, as a health professional, the figure that addresses the therapeutic exercise and functional recovery of patients with pathology, as described in the Law on the Organization of Health Professions. In addition, after that meeting, other meetings will be held with different general directors of the Castilla-La Mancha Health Service (SESCAM), to address this issue.

One of the aspects that stands out from the College is that the initial project meant an increase in budget items. Merino Andrés points out that this program “has a budget of more than 600,000 euros to implement a project that, honestly, is already being carried out in the SESCAM (Health Service of Castilla-La Mancha) through the skills that the physiotherapist has and performs in their daily clinical practice”

“We must not forget”, he continues, “that the Primary Care Physiotherapy Units, more specifically the Talavera de la Reina Integrated Care Management, carried out a project recognized by the Ministry of Health, Social Services and Equality as ‘ Good Practice’, within the framework of the Strategy on Rheumatic and Musculoskeletal Diseases”.

Applications to the Administration

The demands that COFICAM makes to the Administration are mainly two aspects, according to the President of the College.

The first, “to take advantage of the Physiotherapy resource existing in the regional health service, which could help as a health professional to reduce through its intervention in a significance of the health cost in different pathologies, where said amounts have already been quantified in several scientific studies at around 3,500 euros per year per patient. In addition, being able to reduce waiting lists and incorporate patients into their usual day-to-day activities earlier; since some Physiotherapy care units such as those existing in the Community of Castilla y León, handle a volume of 1,000 patients a year”.

And, the second thing that is requested, “is that the different existing laws be complied with, which indicate that the Physiotherapist is the health professional who can perform therapeutic exercise when patients present pathology. This fact has already been ruled in court rulings that give legal certainty to patients, of being treated for the appropriate health profile and not for another”, summarizes Javier Merino Andrés.

The President of the entity recalls that the so-called Sports recipe “is not a new project as such, since in the different integrated managements of the region different health education programs have been carried out to improve the clinical conditions of the patients”. For example, in the Talavera de la Reina Integrated Care Management, a program is being carried out in bio-healthy parks with a group of elderly people to improve their physical condition, avoiding early deterioration of their health. Or the program for the prevention of falls in the elderly carried out in administrations such as Albacete, Ciudad Real, or Cuenca, where therapeutic exercise is carried out in frail geriatric patients at risk of suffering falls.

“Therefore”, says Javier Merino, “the project itself is somewhat recommendable, but it must be carried out by trained health personnel, with skills in the matter and with the existing legislative support. Therefore, it is not understood that it can be done in another way if it is not with the figure of the physiotherapist”, he concludes.

Wed Jul 27 , 2022
A woman takes a picture of a house that is burning after an attack. / BULENT KILIC / AFP The Zelensky Army begins a counteroffensive to recapture the entire region The strategic Antonovski Bridge over the Dnieper River, located on the outskirts of the city of Kherson, occupied like the […] 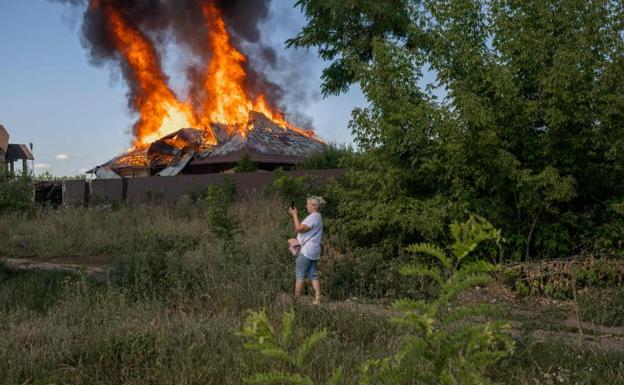