(15-4-2022). The Mallorcan Peco Mulet, from the Badalona Swimming Club, is the provisional leader of the 2022 Spanish Championship for senior sailing. The skipper of the ‘Ginebró’ today chained a second and a first that seem to face him to revive the state title that he won in 2010 at the Club Marítim Altafulla. All in all, Mulet has been forceful: “there is still a lot of championship left”.

Practically no one believed that on this second day of the 2022 Spanish Senior Sailing Skate Championship that takes place in Formentera, two tests could be recorded today in the conditions that have been held, especially after the first day (yesterday) was blank to because of excessive wind. Last night the report was not as favorable as the conditions that the 63 registered sailors have enjoyed today.

After yesterday’s rainy day, today the sun has shone, the temperature has been around 18 degrees and a northwesterly wind was blowing at about 10 knots that has had times of up to about 12 knots during the first race, but that in the second one it has fallen, in some moments up to eight knots, to later come back again.

If in the first test the favorable tack was the one to the left of the triangle, in the second it turned out to be the one to the right. Both sleeves have been run over a complete Olympic triangle and the winners have invested about 50 minutes in completing it.

These two tests held so far have already made it possible to see that some skippers seem especially inspired by this state championship. Among these, it is worth mentioning mainly the Mallorcan, Peco Mulet, from the Badalona Swimming Club, as well as Adrià Gabarró, from the same club; Jordi Aránega, from the Club Marítim Cubelles; and Julián Vinue, from the Club Náutic Sitges. The four skippers mentioned have not dropped out of the top-5 of the day in any of the two races held today.

THE BLACK DAY OF PAU GRATACÓS

Facing this inspired day that Mulet and Aránega have lived, the sailor of the Club Mar i Vent de Canet, Pau Gratacós has lived a particularly adverse day. And it is that Gratacós has been the second to enter the first sleeve that has led, practically from start to finish, Adrià Gabarró. However, after crossing the finish line, Gratacós learned that he had made a premature start.

In the second test, Gratacós has continued marked by bad fortune. On this occasion, his adverse point has once again been at the start. He has hurried so much that he has ended up boarding the viewer’s boat, with which he has had to penalize himself and has lost options to be in the leading group and, finally, he has ended up entering the nineteenth.

But everything has not ended there. Later, on land, during the material checks carried out by the championship’s measurement committee, the person in charge of it informed Gratacós that his sail was not in order because it was missing the first category strip. The ‘joke’ has given the sailor a 5% surcharge on the score of the two races carried out today. Gratacós has not been the only one to have suffered this same ‘corrective’.

Like the vast majority of sailors who compete in this edition of the Championship, Adrià Gabarró has arrived at it without excessive prior training. Despite this, in today’s first leg, in which a short wave was very uncomfortable and often slowed down the boat, as well as certain slight drops in the wind that forced the boat’s trim to be adjusted quite frequently, Gabarró was able to optimizing the speed of his GD skate (the ‘Rolls Royce’ of skates, as he puts it) and has been at the forefront of the first moto pretty much from the start.

Following behind were Pau Gratacós, Julián Vinué, Gregori Contreras, Lea Sitjà, Peco Mulet… During the first pitch, Lea Sitjà and Gregori Contreras, both from Club Natació Badalona, ​​had a collision in which Sitjà, going to windward, did not He has kept away from Contreras who was going to leeward and has made a notorious hole in him that has forced Contreras to withdraw. Sitjà has penalized himself but, at the time of writing, it is likely that the protest committee does not accept that self-penalty due to the damage inflicted on Contreras’ boat. This would mean that Sitjà would lose the seventh place that she had obtained in the first heat.

On the second beat, those positions have been maintained, although Mulet has overtaken Aránega, placing fourth.

At the stern, Adrià Gabarró has been overtaken by Pau Gratacós, as a result of falling into the water. In any case, Gabarró, from Club Natació Badalona, ​​was able to recover quickly and managed to be the first to cross the finish line, while Pau Gratacós, from Club Mar i Vent Canet, came in second, although that position would not officially go up to the classification by their OCS, and the beneficiary of this would be Peco Mulet, from Club Natació Badalona, ​​who would be the second official; Jordi Aránega, from Club Marítim Cubelles, would be the third; Julián Vinué, from the Clkub Nàutic Sitges, the fourth; and Quim Esteba, from Club Nàutic Tamariu, the fifth.

The Andalusian sailor of the CAND Chipiona, Angel Miranda, has lived today his good 40 minutes of glory in the second contested race. With the boat ‘Pistacho’ he was the first to pass the buoy on the first beat with a comfortable lead. Miranda has decided to go on the right side in this second round, which has turned out to be the favorable side, contrary to what happened in the first race.

Angel Miranda, however, has not been able to ‘hold off’ the tenacious Peco Mulet. In this way, the skipper of the Ginebró’ has surpassed Miranda in the stern, so that Mulet has started the third and last beat leading the fleet.

Behind Mulet, the fight for podium places has been intense between Aránega, Angel Miranda himself, Julián Vinue, Jordi Dalmau…

After the two tests held today, it can be stated that the 2022 Spanish Championship is already valid, since the minimum number of tests required for it is two sleeves. At the moment, Peco Mulet, from Club Natació Badalona leads the provisional, after having sailed today with a new sail from the Climent sailboat, specifically, the flat version. Mulet account, for now with only 3 points. He is followed by Jordi Aránega, from Club Marítim Cubelles, with 5 points; the third is Adrià Gabarró, with six points. And there is yet another pattern with a score so far in the single digits. This is Julián Vinué, from Club Nàutic Sitges, with seven.

On the other hand, it is worth highlighting the fifth place in the provisional general standings held by the young Jordi Dalmau, from the Club Marítim Altafulla, who has started the championship, like his aforementioned rivals, with a lot of inspiration and showing the already historic cracks that he is willing to stomp in the queen category of the class.

Two more tests are scheduled for tomorrow. The attention signal is scheduled at 1:00 p.m. 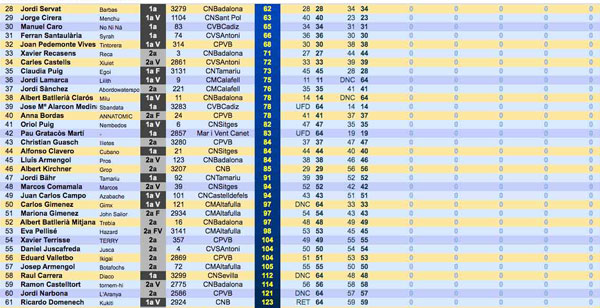 Fri Apr 15 , 2022
Compartir Tweet Compartir Compartir E-mail In order to support the commitment to reduce greenhouse gas emissions to less than 30 million tons, the companies also signed a Memorandum of Understanding to support each other in the fight against climate change. Santiago de Chile.- […]