(15-5-2022). Peco Mulet, from the Natacio Badalona club, was the absolute winner of the 2022 Tamariu Trophy. The ‘Ginebro’ skipper beat Julián Vinué, from the Nautic Sitges club, by just one point. The winner of the second was Daniel Juscafresa from the Vela Sant Antoni club.

Once again the south wind has dominated the Tamariu regatta course today but it has done so with much greater force than yesterday’s. Today, Sunday, that wind from the south (a gust of wind that reached 36 knots at Cap de Creus) made an appearance at the beginning of the sleeve with about 15 knots, which subsequently rose to 18 knots, reaching peaks of 20 knots.

As for the sea, it presented a short but high wave, which favored sharp pitching of the boat, as well as a relevant risk of ‘dunks’ in the open courses.

The gale has ended up causing up to fifteen sailors not to finish the test. In this way, of the 42 sailors, only 27 have finished.

Adrià Gabarró, from the Badalona Swimming Club, has today removed the thorn from yesterday’s first test when he was in the top four, suffered a leg mishap that left him KO and had to retire. Gabarró has left by the committee boat and after that has gone to the right in search of the high walls on that side of the Tamariu coast. This has allowed him to take an advantage that has placed him at the head of the fleet, being the first to pass the mark on the first beat. Following him was Julián Vinué, second, closely followed by Xavier Roca, third, and, later, Peco Mulet.

During the first round of the triangle the positions were maintained, although at the end of it, Xavier Roca was ‘stepping’ on Julián Vinué’s cleavage bar.

As in the first beat today and in the three yesterday, the sailors dedicated themselves to supporting the shoreline until they almost licked the walls of the cliffs. When they reached one of them, they turned out to sea but without too much support to turn back to land in order to go along the coast.

PULSE BETWEEN ROCA AND VINUÉ

On one of those tacks on the second beat, Xavier Roca managed to overtake Julián Vinué.
Meanwhile, Adrià Gabarró, very consistent with his ‘Blau’, has continued to maintain the leadership of the fleet. “The boat was going very well for me and with the North Sails sail and the AG plus hard mast I felt very strong despite the gusts that were happening”, the skater would later declare on land.

Gabarró was, once again, the first to pass the buoy on the second beat. Behind him have passed Xavier Roca, second, and Julián Vinué, third, while Peco Mulet maintained his fourth position.

On the run, led by Gabarró, Roca and Vinué have maintained an intense pulse so that at the end, once Gabarró has passed, Roca and Vinué have overcome it very close together.
With a Gabarró entrenched in first place, the third beat was very marked by the duel between Xavier Roca and Julián Vinué. The latter has managed to position himself further to windward than Roca and both have returned to the shoreline, followed by the bulk of the fleet.

If Vinué managed to overtake Roca and come in second, the 2022 Tamariu Trophy would be his, as his main rival, Peco Mulet, was fourth. Those positions were identical, but swapped, to those recorded in yesterday’s heat, Saturday. And before the tie, Julian Vinué was the beneficiary for having obtained the best result in the last test.
However, Xavi Roca is a lot of Xavi Roca and after yesterday’s ninth, the four-time champion of the Tamariu Trophy today wanted to get even. In this way, during that third beat, Roca has kept Vinué ‘at bay’ and has always crossed the bow of Vinué’s ‘Pressiosso’ the various times they have met.

In the end, Adrià Gabarro was the first to cross the finish line. The two-time champion of the Tamariu Trophy (he won it in 2006 and 2017) has thus shaken off the bitter taste of yesterday’s withdrawal and today has shown once again that, as happened in Formentera, he is one of those skippers who always should be considered in the top positions.

The first second has been Daniel Juscafresa, who has entered the sixteenth of the general.

After the two disputed sleeves, the podium has reflected how close this edition has been. Just one point has separated each of its members from those who have preceded.

In this way, Peco Mulet, from the Badalona Swimming Club, has registered his name for the first time in the list of winners of the Tamariu Trophy, with 6 points. Julián Vinué, from Club Nàutic Sitges, finished second, with seven points; and Quim Esteba, from Club Nàutic Tamariu, was third, with eight points.

THE YEAR OF MULET

Peco Mulet manages, in turn, to contribute the first victory of the Club Natación Badalona in the list of winners by clubs of the Trofeu Tamariu, which is led by the Club Nàutic Tamariu with six absolute victories (5 by Quim Esteba and one by Jordi Bahr).

Without a doubt, the boss of ‘Es Ginebró’ has a 2022 in which he seems to be seeded. Last April he managed to become in Formentera the third Badalona Swimming skater who achieved the status of two-time champion of Spain. His predecessors were Hilarió López (champion of Spain in 1950 and 1956) and Carlos Crespo (champion in 2003 and 2006).

Regarding the top-5 of the Trofeu Tamariu 2022, after the third place of Quim Esteba (five-time absolute champion of the Tamariu Trophy), the fourth overall was Xavier Roca, from Club de Mar Sitges, with eleven points, while the The winner of yesterday’s test, Joost Depoorter, from Club Vela Sant Antoni, has classified fifth in the final general classification, with 15 points.

THE ‘SUNDAY OF GLORY’ OF ‘JUSCA’

The winner of the second, Daniel Juscafresa also registers his name for the first time in the list of winners of the Tamariu Trophy in that category. Juscafresa, from the Sant Antoni Sailing Club and who has been classified fifteenth overall, also achieved that the second-place Tamariu Trophy winner prize once again went to a patron of the entity he presides over. Last year it was won by his teammate, Xavier Peñas.

ROUND DAY FOR ‘JUSCA’ In addition to winning in the second category, Daniel Juscafresa (on the left) was fortunate today to be the winner of the half sail that traditionally subsidizes the sailboat Joost Depoorter (on the right) in the Tamariu trophy.

The second place in second place also went to a sailor from Club Vela Sant Antoni, Carles Castells, and the same thing happened with the third, Francesc Macías.

It should be noted that both Daniel Juscafresa and Carles Castells already occupied places on the second category podium in last year’s Trofeu a Tamariu edition. At that time, Juscafresa was second and Castells, third. In this sense, the Club Vela Sant Antoni has revalidated this 2022 the integral podium of second that it harvested last 2021. 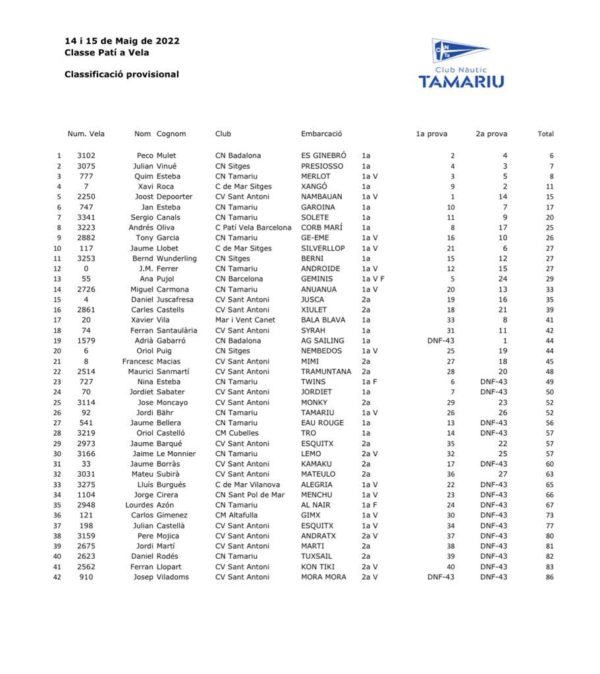 Mon May 16 , 2022
The outskirts of the town where Russian troops suffered their first major ambush are a graveyard of tanks and armor 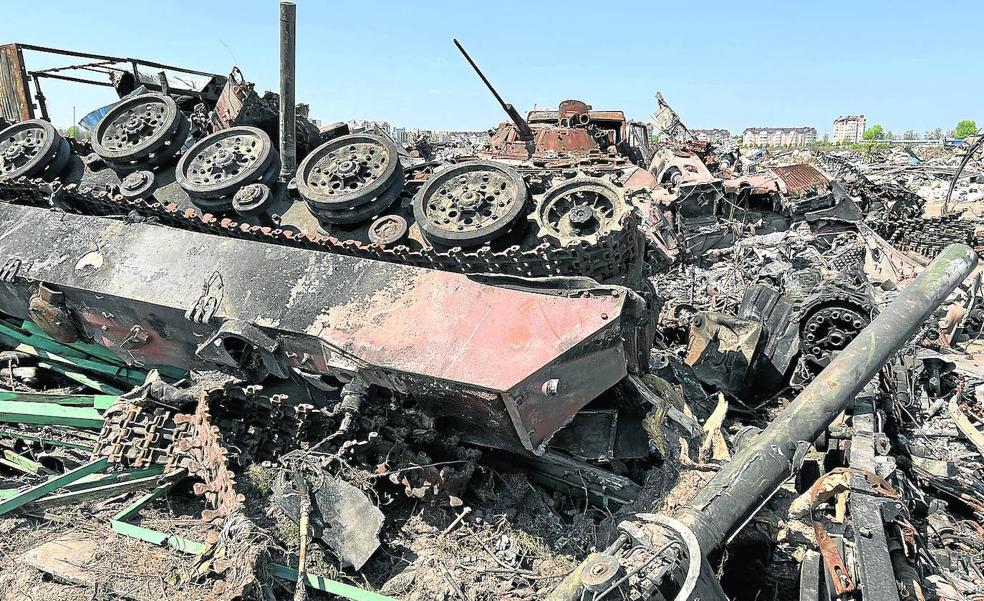