WITHOUT GETTING DOWN FROM THE PODIUM PLACES Oriol Castelló has been the winner of the Volta a Menorca-Trofeu Lluís Gay 2022, after reaping a second and two third in the competition sections of the Menorcan round.

(1-7-2022). The last stage of the Volta a Menorca- Trofeu Lluís Gay 2022 has been run with a north wind of 18 to 30 knots. Quim Esteba and Nina Esteba were the first to cross the finish line. The winner of the Volta was Oriol Castelló who came third today.

This 2022 seems to be erected as the year of the Club Maritim Cubelles and that of Nina Esteba.

And it is that 16 years after Jordi Aránega, from the cubellense club won in the first Volta a Menorca (in 2006), his teammate, Oriol Castelló has been the winner of this year’s edition. As will be remembered, it was precisely Oriol Castelló who proposed to Jordi Aránega, when they were both junior skaters, to go together to Sant Pol de Mar to participate in the 1995 Catalan Junior Sailing Skate Championship. After what happened today in the Minorcan round , Oriol Castelló and Jordi Aránega already have two key common places in their careers as sailboat skippers. These are, in addition to their Club Marítimo Cubelles, that Sant Pol de Mar when they were Juniors, and the island of Menorca when they were senior skaters. The two, in addition, ratify how sown the Cubellense entity would be this 2022, because to the title of runner-up in Spain for the second consecutive year and that of Champion of Catalonia this year for Aránega, now this victory in the Volta a Menorca of Oriol Castello.

For her part, Nina Esteba, the only female in this Volta a Menorca 2022, confirms her complete recovery from the cruciate ligament injury suffered last winter and which had her in the dry dock for several months. The patron saint of ‘Twins’ demonstrates her fighting and tenacious character in the face of adversity, as well as having taken more than good note of the advice and teachings of her father, the ‘master’ Quim Esteba. To her third place in the first category Championship of Catalonia conquered at the beginning of last June in Canet, Nina Esteba today added the runner-up position in this year’s Volta.

And that the elements have not made it easy for Oriol Castelló, or Nina Esteba, or any of the other eight expedition members of this edition of the Menorcan round.

The skaters have left Es Grau around 1:00 p.m. this afternoon to complete the last stage. A north wind of about 18-20 knots was blowing and the intense ‘work’ carried out by it throughout the past night has left a sea flooded with large and multidirectional waves that have forced the expeditionaries to give themselves thoroughly and leave all of them completely exhausted, especially from the ‘backpack’ of at least 70 miles sailed the previous three days.

From Es Grau to the mouth of the bay of Mahón, the entire fleet has sailed in canned condition with the wind blowing by the (long) fin. “You had to navigate very carefully. You ran the risk of nailing bows or that the wink of a wave caused you an unexpected jibe”, Oriol Castelló explained to CMDsport.

And that stretch to the mouth of the baghia and the port of Mahón has not been exactly short. The skaters have invested about three hours.

RACE TO THE ILLA DEL REI

Arriving at the mouth of the bay, the nautical director, Rafel Figuerola, has started the process of leaving the competition section. The sleeve had as its route the entrance to the bay of Mahón and as its arrival, the back of the Illa del Rei located inside it. A close-hauled one with a Tramuntana wind for half an hour.

Castelló has acknowledged that it has been “the most stressful regatta I have ever done in my life. That Tramuntana was going his way. As soon as you had 15 or 20 knots, how it would ruffle and grow up to 25-30 knots, only to suddenly almost disappear altogether. It has been a very crazy regatta in which Quim Esteba and Nina Esteba have shown that they know a lot and are very good”.

Precisely, Quim Esteba and Nina Esteba have been the first to cross the finish line. The skipper of the ‘Merlot’ has done it in first place, getting the thorn out of the ninth of the first day due to the setback of the Santa Eulalia that he suffered at the start, while Nina Esteba has entered second. Oriol Castelló entered third and fourth, his club mate, Jordi Obach Rafel.

After the three disputed heats, the final classification of the Volta a Menorca – Trofeu Lluís Gay 2022 has been headed by Oriol Castelló, from Club Maritim Cubelles, with 8 points.

Second place went to Nina Esteba, from Club Nautic Tamariu, with 11 points, and third place went to Quim Esteba, with 12 points. A podium, therefore very close and that according to Castelló recognized, “in the end I won because I was lucky enough to be very regular, but the Estebas were very close”.

Quim Esteba, in the foreground, today sailing through the bay of the port of Mahón, followed by his daughter Nina Esteba.

GRATEFUL FOR THE FANTASTIC EXPERIENCE

All the participants have unanimously recognized that the experience of this Volta has been “fantastic” and have especially highlighted the dedication and work carried out by Lluís Gay, president of the organizing committee and main sponsor of the Volta; Gerard Esteva, director of the organizing committee; Rafel Figuerola, nautical director; Francisco Pacheco, captain of the Pailebote Santa Eulalia, as well as all his crew; of Jordi Obach Xifra, in the rescue tasks of him; as well as Alex Esteva, responsible for provisioning at all stages.

Tonight a closing dinner will be held at Bodegas Binifadet in which the organizing committee and the expeditionary skaters will reliably conclude the Volta a Menorca 2022 and, later, the awards ceremony will be held.

Anyway, the skaters won’t be done yet. And it is that for tomorrow, Saturday July 2, an exhibition regatta is scheduled, which will consist of surrounding the Illa del Rei.

The number of laps to be done will be decided in the morning, depending on the wind and the time.

The skaters will offer this show together with Latin sail boats, in collaboration with the association “Els amics de la mar”.

AWARDS OF THE VOLTA A MENORCA

Ukraine denounces another grave with 100 dead in Mariupol

Fri Jul 1 , 2022
Mariupol, where up to 25,000 people may have died, has been one of the hardest hit cities since the start of the war. In the image, evacuation of a woman after an attack on the local maternity center / Evgeniy Maloletka The bodies have been found under the rubble of […] 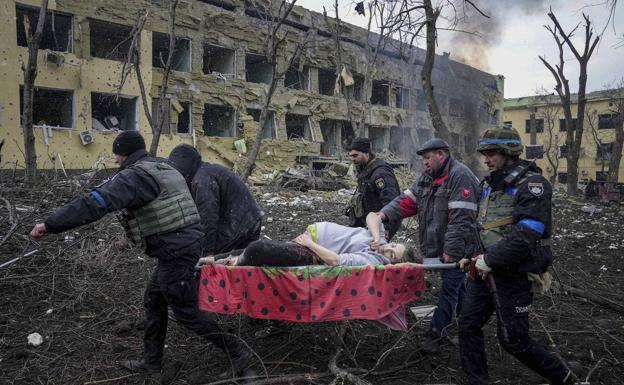