Explicitly "to all witches and wizards" is a special edition of the OnePlus smartwatch. The new Harry Potter variant has just been presented, of course with a matching Hogwarts bracelet and exclusive watch faces.

A special edition of the OnePlus Smartwatch is explicitly aimed at "all witches and wizards". The new Harry Potter variant has just been presented, of course with a matching Hogwarts bracelet and exclusive watch faces.

Update from October 18, 2022: OnePlus has now officially unveiled the special Harry Potter edition of its smartwatch. The watch has a classic design and a strap made of vegan leather on which the Hogwarts crest can be found (source: OnePlus). The frame is made of copper, as the video shows. The Harry Potter watch is only offered in India, where it can be purchased for the equivalent of 229 euros.

After a variant for fans of Cobalt and Cyberpunk 2077, the Chinese company OnePlus would like to release another edition soon. The books and films about Harry Potter are the focus here, which is noticeable with six exclusive watch faces. Fans can choose between Hogwarts, Hogwarts Seal, Gryffindor, Slytherin, Hufflepuff and Ravenclaw.

The OnePlus smartwatch also differs significantly when it comes to the bracelet. Here the manufacturer has opted for the Hogwarts logo , which is placed on a leather bracelet. OnePlus has identified “a generation that still remembers magic” as the target group (source: OnePlus India).

Apart from the appearance, the Harry Potter edition should be a normal OnePlus watch . That means an AMOLED display with a diagonal of 1.39 inches. The battery has a capacity of 402 mAh and can be quickly recharged via Warp Charge. Wear OS is not included. The watch originally went on sale in April 2022 and weighs 45 grams. Since its release, the OnePlus Watch has become slightly cheaper (OnePlus Watch on Amazon).

In the video : This is how the manufacturer presents the OnePlus Watch.

OnePlus has not yet revealed an exact date , but the smartwatch should appear "soon". No information is currently available on the price either. Only OnePlus itself currently knows whether the Harry Potter Smartwatch will also be offered in this country.

Amazon customers don't get enough: No other smartphone is given away more often

Tue Oct 19 , 2021
Big surprise on Amazon: In the top 10 cell phones and smartphones that are most often given away, a mid-range smartphone from Samsung lands in first place and not an expensive flagship or fancy folding cell phone. The reasons for this are diverse. 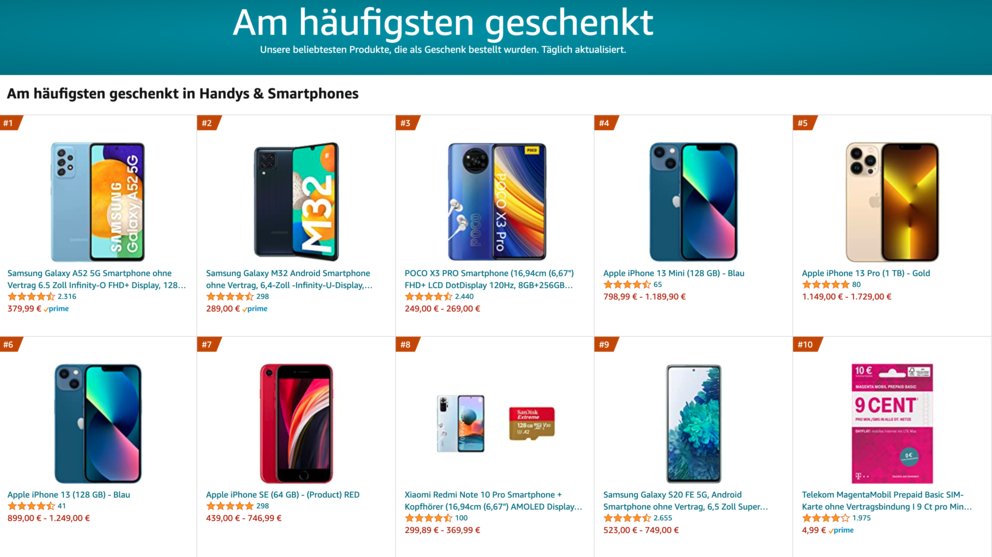