In the cellar of Liudmyla and Oleksandr Ilin it is very cold. It is a space of just four square meters. There is no heating or mobile coverage. The brick walls are unpainted. All there is is a shelf with some food, a table and four chairs, covered with a kind of quilt to make them more comfortable. Liudmyla and Oleksandr spend almost the whole day here. Also most of the nights. They wear blankets and several layers of clothing. They’ve run out of coffee and tea and, to warm up, they drink vodka. In recent days they only go out when they have to go to the bathroom or to write a message to their loved ones saying that they are still alive. This basement looks like a cell, but it’s the only corner of their house where they’re safe from bombs.

This marriage lives in Kharkiv, the second largest city in Ukraine. It is located near the border and here everyone speaks Russian. Ludmila is 62 years old and is a Biology and Chemistry teacher. Her husband is responsible for security at a coal institute.

Kharkiv is also the scene of the most intense fighting in recent hours. The Russian army has bombed blocks of flats and the Ukrainian authorities speak of dozens of dead civilians. In these circumstances, it is best not to leave the house. Right now Liudmyla and Oleksandr can’t run anywhere either. Without the possibility of replenishing the shelves, the stored food is dwindling and they have made a decision. It’s time to ration.

That – rationing – is what Vitaly Tarashchuk in Kiev and thousands of families throughout Ukraine have also begun to do. The war has completely disrupted their lives in just five days of war. Hardly anyone works anymore. Almost all shops are closed. No one goes to the movies or plays a football game. All efforts are now focused on dealing with the invasion. It’s about surviving another day.

“We only eat two meals a day because we don’t know what’s going to happen. In the morning and in the evening, before night falls, which is usually the most stressful part of the day,” explains Vitaly. Unlike Kharkov, in the area where this man lives, supermarkets and gas stations are open for a few hours a day. But the queues are endless and many shelves no longer offer anything. Everyone is looking for food that doesn’t expire soon, many ATMs don’t work, and there are problems paying with credit cards.

Yesterday, after curfew, they went to the supermarket. They made the purchase with the idea that they might not be able to do it again for many days. They were made with lots of wheat and flour to make your own bread at home. It’s a good food “because you fill up fast.” They also bought pasta and bottles of water, as well as some meat and vegetables to make soup.

The bathroom, the safest place

Until the war broke out, Vitaly worked as a carrier. He now goes out at night to protect his neighborhood with the civil militias, while his wife and daughter sleep in the shelter on the ground. They’ve changed the layout of your house in case a missile hits. They’ve moved the furniture and piano away from the exterior walls and have braced the windows. But he is still not sure. 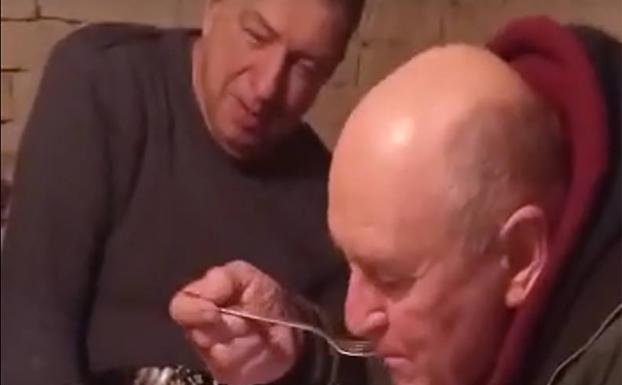 Refuge. Oleksandr Ilin and Eugene Bliznyuk eat in the basement of a house in Kharkov. /RC

Viktoria Dementieva lived in a flat on the left bank of the Dnieper River, also in Kiev, with her dog ‘Shelby’. Since the war broke out she lives with a friend and is exhausted. He barely sleeps an hour or two a day. She does it in the bathroom, the safest place in the house. Viktoria worked as a computer programmer. She now dedicates herself, along with other professionals in the sector, to fighting the ‘fake news’ spread by the Russian army on the internet. She also does it from the bathroom. She only gets to clear her head a bit when she takes ‘Shelby’ out for a few minutes walk twice a day.

Right now, no one can get in and out of Ivankiv, a city near Chernobyl hit hard by the fighting. Vasyl, 68, and Hanna, 67, live there with her daughter Natalia. Yesterday was the first night they were able to sleep in their beds. In Ivankiv there are constant power and water cuts and shops are almost always closed. They are lucky because they have a wood stove to keep them warm and lots of tin cans sitting in the basement. Her other daughter, Liudmyla, lives nearby with her 5-year-old son Oleksii. They are without heat. They are so cold that the little one has become ill, but the pharmacies are closed and they cannot go out.

How to fix screen flickering in Windows 10

Tue Mar 1 , 2022
Fix the annoying flicker from screen on Windows 10 it is something relatively simple, the problem is to find the cause of this flickering. Once we find what generates it, we can proceed to find the solution. Fix: Screen flickering in Windows 10 Next, we are going to comment on […]