The shadow of the Watergate scandal that ended the Richard Nixon Presidency hangs over the entire investigation of Donald Trump’s alleged coup attempt as a shadow of precedent, lessons learned and unfinished resolution. And despite their immense differences – Watergate was a conspiracy against the opposition political party, while the assault on Capitol Hill was fundamentally an attack on democracy – the parallels abound.

The overwhelming testimony against the Republican tycoon of Cassidy Hutchinson, the assistant to Trump’s chief of staff, Mark Meadows, has been compared to that of John Dean, a former White House lawyer in the Nixon era, who led to establishing the existence of a secret recording system in the presidential headquarters itself. A centerpiece of that investigation was the questioning of the president’s secretary, Rose Mary Woods, who was held responsible for accidentally erasing 18.5 minutes of the secret tapes. The impeccable questionnaire that proved impossible that it had been an accident —and therefore, that the White House was covering up the truth—, was carried out by another woman, prosecutor Jill Wine-Banks, part of the team of then-special prosecutor Leon Jaworski. .

Today a legal commentator on the Trump investigation on the NBC network, veteran Jill Wine-Banks speaks from Chicago exclusively for this newspaper about the public hearings of the Commission on January 6 and the differences with the Watergate case.

– How do you assess the work of the congressional committee?

-The commission has done a good job and has presented a strong case against the former president. I have seen specific evidence of numerous crimes such as obstruction of justice and causing an insurrection, which makes it impossible to ever again be elected to public office. Also the crime of conspiracy to defraud the State and other states, as in Georgia, by attempting to interfere in elections.

– In view of the abundant evidence, most people wonder why Trump has not yet been impeached.

–It is not clear, it could be that there is some exculpatory evidence. I doubt it, but it could be. It’s strange that Meadows hasn’t been charged yet, at least for contempt of commission. That he was a high official does not exclude him from the law. Another possibility is that he could be cooperating, but I don’t think so, or that everything is being played out in the hope that Meadows understands that his position is untenable and sticks to cooperating.

-The Department of Justice has requested all the investigation reports from the Commission.

–No doubt, he is investigating and he certainly knows more than we do, but I think he is going very slowly. You don’t have to wait until you have the perfect case or ten felonies: it’s enough to have two or three. With all the evidence we’ve seen so far he could already be indicted, a jury would convict him, and a court would uphold that conviction.

-During Watergate, Nixon was never impeached because he resigned before the impeachment trial reached the Senate. That circumstance seems to hang over the Trump investigation.

–In Watergate there was a legitimate impeachment process underway that could have resulted in a conviction in the Senate trial with a guilty verdict on charges of obstruction of justice, abuse of power and contempt of Congress. But Nixon resigned.

-In the legal framework of that time, it was thought that a president could not be imputed while he was in office.

-With Nixon, I did think that a president could be impeached if there had been enough evidence, which there was not at Watergate. But special prosecutor Leon Jaworski determined at the time that impeachment was the appropriate way to prosecute a president who had broken the law. In the end Nixon was indicted as an unindicted co-conspirator (secretly by the special grand jury) because he was part of the conspiracy and because it would not have been fair to the other conspirators not to include him.

Despite the similarities, there are great differences between the two cases. The political and media context during Watergate was different, there was a majority political will in favor of the investigation, and the press and the public mistrusted Nixon.

–It was hard to see Republicans declaring Trump not guilty during the impeachment after the violence on Capitol Hill. The GOP didn’t vote against him, cleared him then, and they continue to cover him now. I don’t know if they are afraid of him. 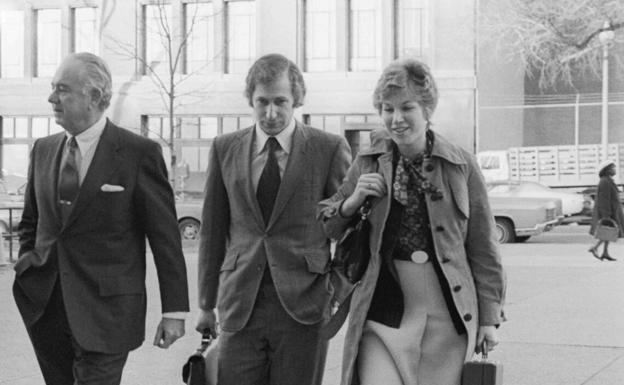 Wine-Banks with his prosecutorial team during the Watergate case.

–You have defined Watergate as the perfect storm. Was Trump’s Coup Attempt Another Perfect Storm?

-I thought that moment should not be repeated again, and here we are: history repeats itself even worse. Because now it’s not just a robbery. It’s an attempt to nullify my vote, and anyone else’s, in a democracy. It is a real and imminent threat to the democratic system, not just a case of abuse of power.

– We live the consequences of the Trump presidency, as we have seen these days with the decisions of the Supreme Court on abortion or weapons. Basically, five unelected people now make decisions across the country. Is it possible to dismiss members of an institution that seems to be above the law?

– There are some options. Members can be removed if there is evidence that they have lied under oath. Congress can impose an ethical regulation and can also limit the mandates of its members, to 10 years, for example, so that each president can appoint at least one judge during his term. The Court must be in line with current political attitudes. As we know, most Americans support abortion, but the Court has ruled against it. And that cannot be, particularly when none of them have been elected, and when they represent a minority of a minority. The Republican Party is a minority and the far right is a minority of that minority.

-It is not a very positive vision.

-We live in a country where, frankly, we do not have the mandate of the majority, and I personally believe that the ‘filibuster’ (of the Senate) should be eliminated because it perpetuates the power of the minority.

–You showed that the Nixon White House wanted to blame Rose Mary Woods for having erased 18.5 minutes of one of the compromising tapes in the case. The moment was shocking: two women face to face in one of the most crucial judicial moments in the country’s history. How did she experience it?

–When you are at moments of that level in the story and when your own presence breaks barriers, you keep your head ‘down’ and focus on getting work done. The best job you can do. The interrogation was very important because public opinion began to perceive the big lie and to see the White House for what it was. And it had nothing to do with me and her being women, the facts were obvious.

–
The judge, John Sirica, told them: “Come on, ladies, we have enough problems in the courtroom without having to see two women fighting.”

“You have to hear things like that, like on another occasion when I was questioning one of the defendants: ‘Mr (Robert) Mardian, don’t you know you can never win an argument with a woman?’ It’s horrible, considering you’re the prosecutor. At that time they introduced you to their friends by saying the “woman lawyer.”

Cassidy Hutchinson’s testimony before the Commission on January 6 revealed scenes of an unbalanced, violent and out of control president.

-This aspect of Donald Trump’s behavior had never been seen so closely. What feeling does it give you?

– Cassidy’s testimony about the scene of the crazy president throwing the plate with the ketchup against the wall was devastating. In the last days of Watergate it was reported that Nixon was insane, that he walked the corridors of the White House talking only to the pictures on the walls, that he drank too much and was rude. In the end it is about two weak men, similarly fractured. When we hear about all these abnormalities, he is horrified to think that they have access to the nuclear codes.

–The commission hearings are having an effect on public opinion and now the majority of Americans are in favor of indicting Trump. It has even increased their number among Republicans.

–Fox News, which has not broadcast the hearings, aired Hutchinson’s this week, and one of the presenters even said that the evidence was damaging to Trump. Something is changing, maybe it’s starting to sink in among his followers, even if he’s just among the moderates. This time the public will have to think that he is too repulsive, too corrupt, too guilty. And perhaps he will affect the vote in this year’s elections. That is very important to me.

–To use your own words, not impeaching Trump would not only be partisan, but also dangerous?

-I believe that criminal charges are the correct solution and I believe that America is going to continue asking for it. Because if you are not held accountable then you are above the law, and we firmly believe that no one is above the law. If we had indicted Nixon after he resigned, which he would be tantamount to indicting Trump now, it would have set a precedent and a message to Trump himself. Knowing that he could be indicted might have stopped him from doing everything he has done and continues to do, with his stories of voter fraud.

How to uninstall apps on Apple TV?

Mon Jul 11 , 2022
Apple TV is the ideal dongle for users who are used to the Apple ecosystem, and who want to control all their content, such as music, series or movies, without leaving the signatureRemoving some applications installed on Apple TV has a positive effect, since it improves its performance in general, […]