A soldier of the Ukrainian defense, in the city of Kharkiv. / AFP/Video: Atlas

The Azov Sea port becomes a symbol of the horror of the war, of the Ukrainian resistance and of the Russian irrationality capable of going to the end to consummate its strategy

For the western world, Mariúpol was an unknown city until February 25. That day Russia began a campaign of constant bombing that trapped hundreds of thousands of people in basements or shelters. Since then the horror has not stopped growing. One more step of inhumanity every day. No, every hour. Indiscriminate attacks, snipers who found an easy target in old people looking for food, children who are orphaned or turn their parents into living corpses after losing them, residential buildings focused on the crosshairs of tanks and infantry… An unbearable apocalypse for the healthy minds.

But, unfortunately, something that was also seen in other scenarios of the Ukrainian geography since the Russian invasion began and that is already considered part of the ‘normality’ of the war. The denunciation of the attack on a maternity and children’s hospital made the objective turn around and finally see the reality in all its harshness. It was the third health center in Mariupol turned into rubble, but the first that generated a movement of outrage around the world. A “war crime”, as the Ukrainian president, Volodímir Zelenski, denounced to the rest of the planet.

We were able to verify it yesterday when the smoke from the missiles and the dust from the debris allowed us to glimpse the truth. Three people, including a child, were killed and seventeen others were injured, some of whom were pregnant women.

Even the Kremlin itself, which on Wednesday denied any involvement and spoke that it was a staging with the participation of actresses, was forced to admit responsibility. That yes, he justified it in the fact that the building had become the center from which the radical attacks against his troops were born. Nothing changes. The 400,000 inhabitants of Mariupol every minute are at risk of losing their lives. The temporary truce announced by Moscow on Saturday to allow the evacuation of civilians through humanitarian corridors never became effective. The shots show it repeatedly.

Why Mariupol? Simply because on the map that the highly decorated Russian generals showed Vladimir Putin to explain his tactics, this city was surrounded by a red circle. Its seafront port of Azov is a key strategic target. Capturing him could bring about a confluence between rebel forces from the breakaway regions of Donbass and troops previously deployed in Crimea, the southern peninsula that Russia annexed in 2014. His conquest could turn the tide.

The General Staff of the former Red Army considers that the south is vital in the invasion and has besieged cities in that strip such as Mariupol, Markov, Nikolas and the long-awaited Odessa in order to cut off Ukraine’s access to the sea, which would inflict enormous economic damage. . From Odessa, one of the first centers of the rebellion against the tyranny of the czars and ‘dress rehearsal’ for the 1917 revolution, as reflected in the historic film ‘Battleship Potemkin’, Moldova would be within reach and with it the constitution of the belt that would link with Transnistria – the other pro-Russian enclave in the region – with which Putin dreams.

However, ground tactics have proven unsuccessful and in recent days indiscriminate aerial bombardments have been resorted to, protected by the impunity granted by the non-existence of Ukrainian aviation. This strategic change, based on horror, affects, above all, the civilian population, not only a victim of the shells but also of the lack of water, electricity, heating and food after the destruction of vital infrastructure by the Russians, that also prevent supplies, as its mayor, Vadim Boishenko, denounces. All communications have been cut practically since the beginning of this week, which makes it impossible for citizens to interact.

The population of Mariúpol – by the way Russian-speaking – is also facing a health crisis because there are numerous corpses that deteriorate in its streets without anyone daring to pick them up. In addition, the cemeteries are outside the urban area, on the outskirts, a territory occupied by the invaders. For this reason, yesterday the first burials began to be registered in common graves opened in parks and lots.

“We are very brave and we will continue to defend the city. The style of the Russian troops is like that of the pirates: they do not fight, they simply destroy entire districts, at all costs, ”said the deputy mayor of Mariupol, Sergei Orlov, helplessly yesterday.

How to free up space in Windows 11

Fri Mar 11 , 2022
It is important to be clear how to free up space on Windows 11 since we use the computer too much and it is normal that from time to time the storage reaches its limit; especially if we have a solid state drive. For this reason, it is important to […] 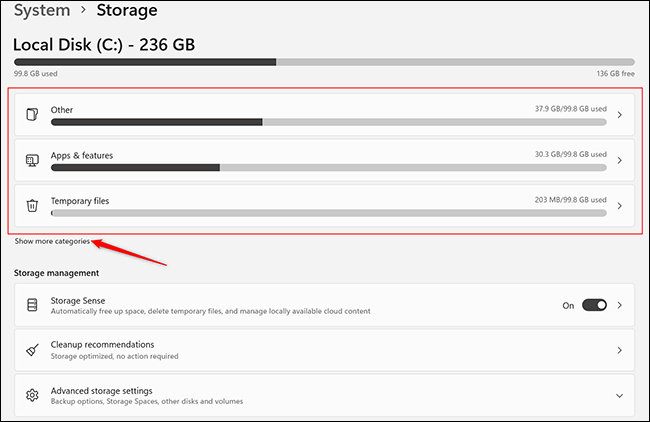