France preferred the continuity of the centrist Emmanuel Macron in the Elysée Palace to the rupture represented by the far-right candidate Marine Le Pen, whose victory would have been a real political earthquake in the republic and in Europe. The French said yes to Macron’s Europeanism and progressivism and rejected Le Pen’s Euroscepticism and ultra-nationalism.

The 44-year-old president was re-elected for five more years with 58.3% of the vote, compared to 41.7% for his opponent, according to the first estimates by the Ipsos polling institute published by the France 2 television network. According to the experts, abstention would be at 27%, which would be a record, if that data is confirmed. In 2017, the rate was 25.4%.

Macron’s victory, which all the polls had predicted for months, has, however, been less comfortable than in 2017. Five years ago, the candidate for La República en Marcha defeated Le Pen with 66.10% of the ballots compared to 33.9% of the candidate for National Regrouping, formerly called the National Front. And he became at the age of 39 the youngest president of France.

Of the twelve candidates who started the race for the Elysée Palace, only the centrist leader and the leader of the extreme right managed to qualify for the second round as they received the most votes. The rest of the candidates were eliminated in the first round. Macron voted with his wife, Brigitte Macron, in the spa town of Le Touquet, while Le Pen voted in Hénin-Beaumont. Both towns are located in the north of France, 120 kilometers apart.

The representative of La República en Marcha wins the elections, but the extreme right advances in France. In the 2002 presidential election, Jean-Marie Le Pen, founder of the far-right National Front party and father of Marine Le Pen, obtained only 17.79% of the vote, compared to 82.21% for Jacques Chirac. His daughter, who this Sunday was appearing for the third time in a presidential election, has obtained 41.8%, a historic result for the French extreme right.

A not so solid ‘front’

Chirac swept the 2002 elections thanks to the so-called “republican front.” All the parties linked to this ideology gave the slogan to vote for him to prevent the extreme right from coming to power in France. This Republican front is no longer as solid as it was 20 years ago. For example, the leftist leader Jean-Luc Mélenchon, the third most voted candidate in the first round, did not explicitly ask for Macron’s support in the second round. Although he asked his supporters not to give “a single vote for Mrs. Le Pen”, he left the door open for them to abstain or vote blank or null.

The revalidation of the president puts an end to a strange electoral campaign, overshadowed by the Ukrainian war. Macron, busy mediating between Moscow and kyiv and the French presidency of the European Union, officially announced his candidacy in March. He wanted to be “president until the last quarter of an hour.” He refused to debate his opponents before the first round. But he did it with Le Pen last Wednesday and won the presidential debate.

Le Pen (41.7%) «I am committed to being a strong counter-power; the real opposition to the liberal president»

These elections have made it clear that Marine Le Pen’s party is no longer as scary as when her father led the National Front. Marine Le Pen is not Jean-Marie Le Pen. And National Regrouping is not the National Front. In order not to scare the electorate less ultra and attract voters, the candidate emphasized in the electoral campaign the loss of purchasing power and the problems of many of her compatriots to make ends meet, one of the biggest concerns of the French .

The ultra Éric Zemmour, who at the beginning of his campaign seemed to threaten his leadership on the extreme right, in the end served as a “lightning rod” for criticism and helped to whiten his image. Beside him, Le Pen seemed more moderate, although if one carefully read the Regrouping National program it is clear that it is still a party of the extreme right. 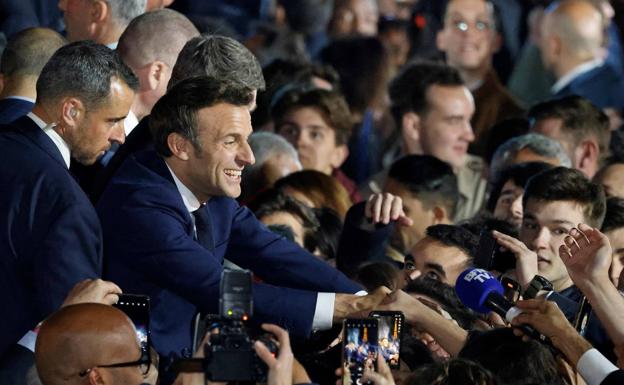 There is extreme nationalism, a strong hand with immigration, his desire to establish a national preference for jobs and state aid, the promise to ban the Islamic veil on the street, the link he made between immigration and crime and the confusion between Islam and Islamism. The strategy of “demonization” of the party that he undertook when he took over the reins has worked, however, up to a certain point. Le Pen is voted for by more French than five years ago, but he still hasn’t won a presidential election. The leader of the extreme right has not managed to break the glass ceiling. Otherwise, she would have made history by becoming the first female president of France and the first of ultra ideology.

The participation rate in the elections was 63.23% by mid-afternoon this Sunday, two points less than in the 2017 elections, according to data from the French Ministry of the Interior. On the 10th, when the first round was held, turnout at the polls at the same time reached 65%. In short, it can be said that abstention has broken historical records after three decades of inexorable decline. As a reference, in the 2017 presidential elections the participation rate was 65.3%. And in 2012, 71.96%.

The same rivals on the ballot as five years ago, the absence of a real electoral campaign, the feeling that everything is already decided in advance and the fact that the second round of the presidential elections coincided with the school holidays meant that finally less French will go to the polls.

2000 smart contracts are exceeded in Cardano

Mon Apr 25 , 2022
In September of last year, the Cardano (ADA) network was upgraded to include smart contract functionality, making it capable of scalability and faster performance. In particular, Plutus (a Cardano-based smart contract platform) has seen significant growth due to the upgrade. The number of Plutus scripts increased by 489 between March […]