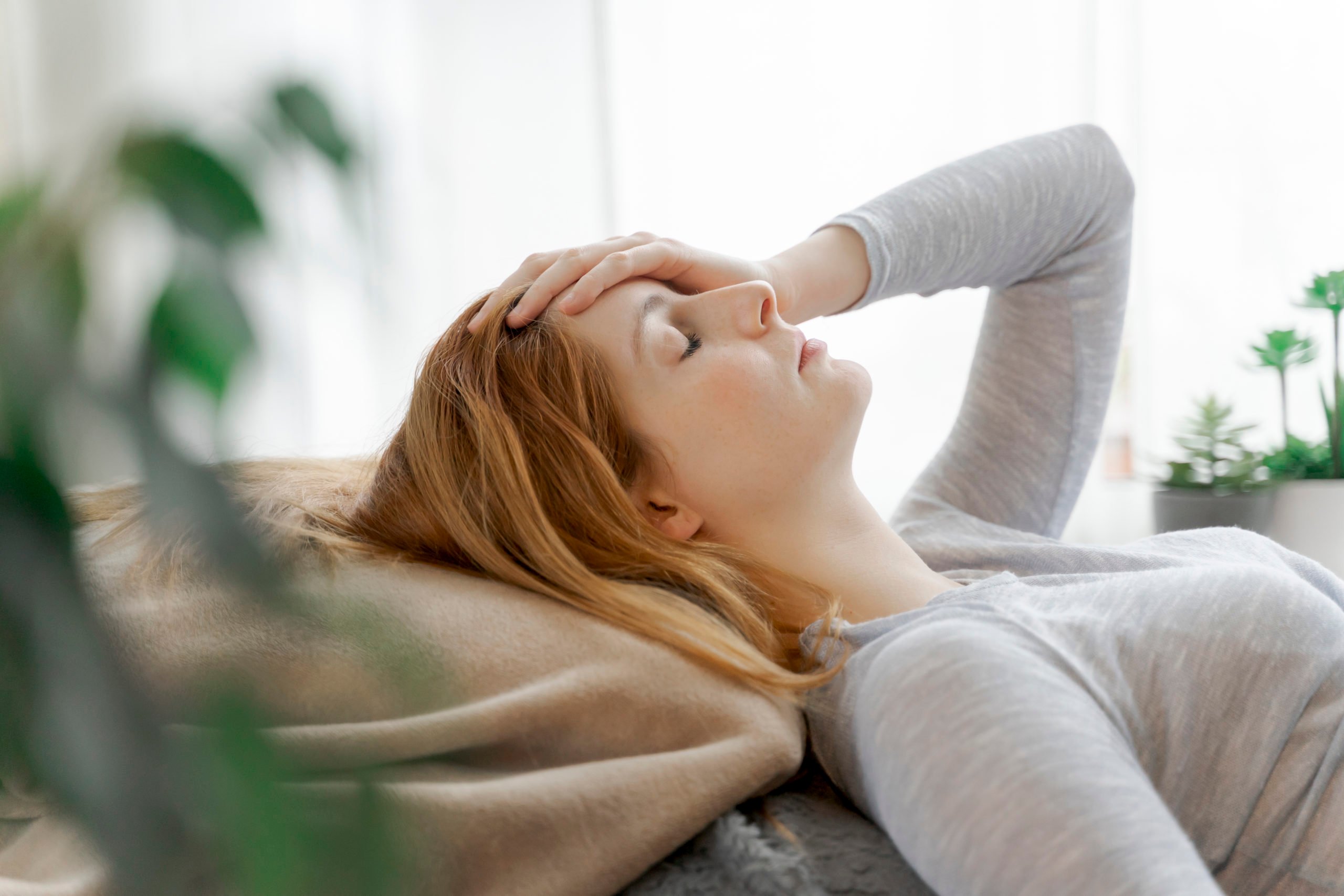 Getty Images It is estimated that around ten percent of all patients have to struggle with long-term consequences after a corona infection – for people with symptoms it is even a third. The most common symptoms are pronounced fatigue, decreased performance or cognitive complaints such as problems with memory and concentration. Those affected continue to have symptoms for a long time, especially after severe courses. However, it can also affect patients who only had mild symptoms during their acute phase. When asked about her greatest wish, Sophie Jokel has a clear answer: The young woman wants her old life back. Continue your training as a health care professional, do sports, enjoy the day. None of this works anymore. Jokel always feels tired and drained. The 20-year-old has to rest or lie down several times a day. Her concentration has decreased, she has become more forgetful, and sleeps worse. As a result, she has been unable to work for several months. Jokel would never have thought when she was infected with the coronavirus in October 2020 that she would be with the disease for so long. Although she suffers from bronchial asthma, it has had a moderate course. Today, almost eight months later, the acute phase is long gone – but she is still feeling the consequences of her infection. Sophie Jokel is not an isolated case. The German Society for Pneumology and Respiratory Medicine estimates that around ten percent have to struggle with long-term consequences after a corona infection, also known as post-Covid syndrome or long-covid. A British study recently even found: A third of all those infected there who also had symptoms had Long Covid symptoms. However, research into how many people have persistent symptoms is still very inadequate. Observations and assessments vary – mainly because the studies differ in the setting, the affected group and the recorded duration of the symptoms. Patients with a severe course seem to be exposed to a particularly high risk of developing long-term effects. Researchers from Wuhan were able to detect at least one symptom in 75 percent of 1,700 hospitalized patients six months after the infection. A British study paints a similar picture, in which around 70 percent of the participants hospitalized under Corona subsequently suffered from long-term effects. Studies that also include patients with a mild to moderate course, on the other hand, come in a significantly lower proportion. Scientists from England, Sweden and the USA evaluated the data from 4,182 study participants who were supposed to describe long-lasting symptoms after the Covid-19 disease using an app. More than 13 percent noted long-term effects that lasted longer than 28 days. Eight weeks after the infection, around 4.5 percent had symptoms, and two percent complained of symptoms twelve weeks later. “The truth will be somewhere in the middle,” says Hans Klose. He is the chief physician of the pulmonology department at the University Medical Center Hamburg-Eppendorf (UKE). A valid statement on the magnitude of long Covid can only be made when there is more data, according to the doctor. Klose himself is leading a scientific study with 150 patients who suffer from long-term effects of a corona infection. Those affected are divided into three groups, which are compared over a period of two years: mild, clinic and intensive care unit.

The symptoms that the patients exhibit are varied. According to Klose, the leading factor is so-called fatigue – i.e. a feeling of persistent tiredness, exhaustion and listlessness. Often those affected, especially those who were treated in hospital, are no longer as productive as they were before their illness. They complain of shortness of breath, shortness of breath, or constant coughing. Cognitive limitations can also occur – word-finding disorders, concentration and sleep disorders, memory loss or even depression. Why it is that some people suffer from the consequences for weeks after a Covid 19 disease has not yet been finally clarified. “All the data suggest that severe courses also tend to leave protracted complaints,” says Klose. If a stroke occurs in connection with a Covid 19 disease or a patient has to be ventilated, it takes time for them to recover.

It becomes more complicated when patients with a mild to moderate course develop long-term consequences. According to Klose, a much-discussed hypothesis is in the direction of an immunological false reaction: the virus goes, but our body continues to fight it – and thus harms itself. A process that has already been observed more often. In most cases, Covid-19 disease is severe or even fatal if overzealous immune cells – so-called autoantibodies – are directed against the body’s own structures. “This is then no longer really virus-related,” says Klose. Diagnosing long covid is often difficult. Because with many patients – especially those who suffered only from mild symptoms during their acute phase – the medical findings are normal afterwards. It is therefore often not possible to prove Long-Covid on the basis of clear medical data. According to Klose, doctors can see scarring after a severe Covid 19 disease on an X-ray. Fatigue, poor concentration or the fact that patients can no longer read a text correctly, on the other hand, are complaints that can only be recorded through the description of the patient. Certain tests can be carried out, but according to Klose the necessary comparative values ​​are missing. “We don’t know how the patients would have done had they not been infected.”

Young patients in particular are increasingly coming to rehab

It is similar with Sophie Jokel. After the acute phase of her illness, she feels a stinging sensation in her chest. Her family doctor sends her to the pulmonologist and cardiologist. Among other things, it is diagnosed that her heart is beating too fast. When going for a walk, she immediately had a pulse of 150, says Jokel. But nobody can tell her what exactly is wrong with her: “I just keep hearing from the doctors that my body needs time.” The way back to their old life is often long-lasting for patients. Doctors can only treat the symptoms; there is no uniform therapeutic approach. “There is no pill or injection against Long-Covid,” says Klose. Those affected therefore have no choice but to accept the disease and adapt to it in a second step. It doesn’t help to fight fatigue with all your strength, says Klose. “That only causes frustration.” After the situation at Jokel continues to worsen, she falls into a hole in January, both physically and mentally – and is just lying around at home. Her family doctor sends her to the Median Clinic in Heiligendamm for five weeks on rehab. More than 800 Covid-19 patients have now been treated there. According to Jördis Frommhold, chief physician at the clinic, the need is increasing steadily. Young patients in particular would increasingly come to rehab. Which treatment or therapy is then used depends on the type of complaints of the person concerned. Patients who have had a difficult course should, according to Frommhold, learn to breathe properly again, for example. In the case of complaints such as fatigue, on the other hand, it is more a matter of structuring daily routines correctly and providing psychological support for the patient. Sometimes, especially in the case of neurological symptoms, one also has to consult additional diagnostics and plan further outpatient care. Neither Klose nor Frommhold can say whether and when the patient’s symptoms will completely disappear. In the majority of the patients who Klose cares for, there are already indications of improvement – even if only in small steps and with a great deal of effort. However, certain complaints can arise. also become chronic and lead to considerable restrictions in the life of the patient. “There are patients who cannot return to their old job,” says Frommhold. Sophie Jokel no longer believes that she will soon be able to continue her training. The rehab helped her, but the real success failed to materialize. Actually, she says, she thought that she could start reintegrating into her job soon after the rehab. The permanent tiredness and the fast racing pulse, the difficulty concentrating and the exhaustion are still there. “It pulls me down so much that I’m almost worse off than before rehab,” she says. Jokel knows she doesn’t now. should give up. But it’s also just a lot. The doctors tell her to go out and move. Often, however, she lacks the motivation to do so. “The infection was several months ago and I still don’t see any improvement,” she says. A few months ago, she says, she was a cheerful person – until Covid-19 came. Read too