The IPCC warns of the increase in heat-related illnesses and threats to food security and in Latin America, reinforced by inequality and poverty in the region.

Santiago de Chile.- A new scientific report warned of the irreversible impacts of the climate crisis for the coming decades in Latin America, a region that is highly exposed, vulnerable and impacted by this phenomenon, which is exacerbated by social and economic factors such as high levels of poverty and inequality. .

The Intergovernmental Panel on Climate Change (IPCC), the UN body that brings together climate scientists from around the world, published its latest report on impacts, adaptation and vulnerability on February 28. The IPCC highlights the dangerous and widespread alterations in nature that climate change is causing, affecting the lives of billions of people.

The world faces numerous climate hazards and impacts in the coming decades, many of them irreversible. Climate change will continue to increase the incidence of heat-related illnesses, affect food security and make access to water more difficult. The consequences will be even more marked if global warming exceeds 1.5°C above pre-industrial levels, the lower limit envisaged in the 2015 Paris Agreement.

“This report is a dire warning about the consequences of inaction,” said Hoesung Lee, chairman of the IPCC, at the report’s launch press conference. “Climate change is a serious and growing threat to our well-being and a healthy planet. Our actions today will determine how people adapt and nature responds to increasing climate risks.”

Thelma Krug, vice president of the IPCC, argued that Latin America faces greater vulnerabilities than developed countries due to climate change, “whose effects are deepened by poverty and inequity.” This could affect the region’s role as a food producer and lead to food insecurity, she added.

For example, between 2015 and 2019, soybean crop growth duration (the time between planting and harvest) fell by 4.7% in Central America and 3.1% in northwestern South America . Meanwhile, the duration of maize growth in the same period decreased by 5% in Central America. Such changes may disrupt established cycles and performance.

Extreme weather events are already affecting Latin America and are projected to increase. The list includes rising temperatures and sea levels, coastal erosion and the increasing frequency of droughts, which is associated with a drop in water supply and impacts on human health and livelihoods. For example, the number of extreme weather events in Central America has increased by 3% per year in the last 30 years.

The Amazon, one of the world’s largest reserves of biodiversity and carbon, is described as highly vulnerable to drought. Drought exposure in the biome increased from 8% in 2004-2005 to 16% in 2015-2016, partly attributed to climate change. This has caused an increase in the mortality of trees and a decrease in the productivity of their forests.

“Climate change and its associated effects, such as deforestation and forest fires, have made the Amazon more vulnerable. This affects their ability to store carbon,” said Jean Ometto, IPCC author and scientist from Brazil. “We have already identified lower rainfall and more intense droughts in the southern Amazon.”

The IPCC noted a synergy between fires, land use change (particularly deforestation) and climate change that affect human health, ecosystem functioning, food security and livelihoods. In Latin America, people are increasingly exposed to the dangers of wildfires, with between one and 26 additional days of exposure in the years 2017-2020, compared to 2001-2004.

Since the mid-20th century, the increase in mean precipitation has had a positive impact on agricultural production in southeastern South America. Conversely, the lack of rain has affected subsistence agriculture in the Dry Corridor in Central America, compromising food security.

The dramatic loss of glaciers is also highlighted in the report. In the Andes, between 30% and 50% of the glacier area has been lost since the 1980s. The Southern Andes show the highest rates of glacial mass loss worldwide, contributing to sea level rise. The retreat of the glaciers, together with the increase in temperature and the variability of rainfall, have affected ecosystems, water resources and livelihoods.

The Andean region, northeastern Brazil, and the countries of northern Central America are the regions most vulnerable to migration and climate displacement. Social, political, and economic factors interact with extreme weather events, such as hurricanes, floods, and tropical storms.

“The vulnerability of our countries to climate change depends on a series of interconnected variables, such as the ecosystems on which we depend and provide us with sustenance, poverty, access to basic services and education,” said Edwin Castellanos, author of the report and Guatemalan scientist.

The future and adaptation

If greenhouse gas emissions are not reduced, the risks in Latin America will increase significantly, according to the report. This includes droughts, increased epidemics of vector-borne diseases, and water insecurity from retreating glaciers and declining snow cover. For example, more frequent, shorter and more severe droughts are projected in the La Plata basin.

Impacts on rural livelihoods and food security, especially for small and medium-sized farmers and indigenous peoples, are expected to worsen, including overall reductions in agricultural production, adequate agricultural land, and water availability. By 2050, yield reductions of 23% for rice and between 4% and 21% for maize are projected in Central America.

Extreme precipitation events, which result in floods, landslides and droughts, are also expected to intensify in magnitude and frequency due to climate change. An increase of 1.5C would result in an increase of up to 200% in the populations affected by floods in Colombia, Brazil and Argentina, 300% in Ecuador and 400% in Peru.

The Amazon has been identified as one of the persistent and emerging hotspot areas of regional climate change. Across the Amazon region, the IPCC projects that by mid-century there will be an increase in river and storm flooding, aridity, mean wind speed, extreme heat, fire weather, and drought.

The feedback between climate change and land use change, particularly deforestation, could increase the threat to the Amazon, leading to increased fire occurrence, forest degradation and long-term loss. term of the forest structure.

“The faster we start to adapt, the lower the cost will be. It is much cheaper to invest in prevention and adaptation than to invest in post-disaster”, Liliana Miranda, IPCC author and scientist from Peru. “We have a window of opportunity to adapt and reduce the vulnerability of Latin America.”

For the IPCC, the main obstacle to adaptation to climate change in Latin America is financing. In the Paris Agreement, developed countries have committed to granting US$100 billion in funds for adaptation and mitigation to developing countries, a goal that has not been met so far.

There are already numerous adaptation actions underway in the region, such as improving the quantity and quality of water supply, crop diversification, early warning systems, payment for ecosystem services, green infrastructure, nature-based solutions and observatories of climate-health.

However, effective adaptation will depend on policies and actions at multiple scales, with the participation of actors from all social groups, including the most exposed and vulnerable populations, according to the IPCC. Indigenous and local knowledge is crucial for adaptation and resilience to climate change.

Once again, the report is another call to action with a strong sense of urgency.

“Science has not been respected or heard. The governments only care if they are gaining power or money,” said Gregorio Mirabal, in charge of the Coordinator of the Indigenous Organizations of the Amazon Basin (COICA). “As humanity, we have not been able to respect nature and now we are against time.”

The Fitboxing World Games return after two years of hiatus

Thu Mar 3 , 2022
(3-3-2022). Brooklyn Fitboxing recovers the celebration of the Fitboxing World Games, after two years without being held due to the pandemic. The final will be played at the Caja Mágica in Madrid on June 4, where the teams that are classified in the tournaments that are played in different countries […] 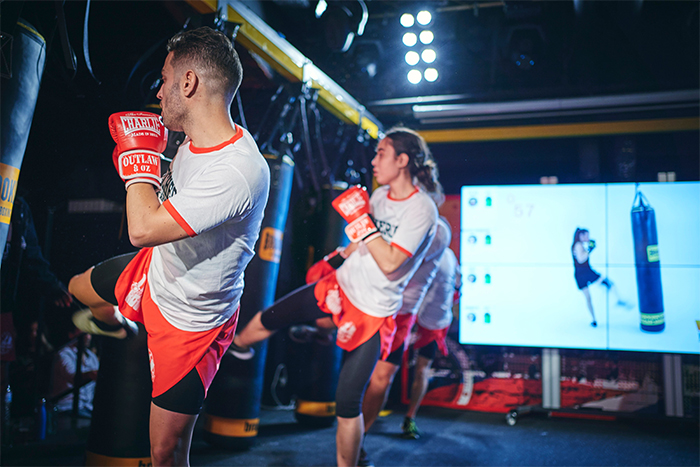