The sailor from the Club Mar i Vent de Canet, Pau Gratacós, had a very inspired Saturday, although in Sunday’s heat, he did not have so much luck on his face.

(12-4-2022). Pau Gratacós, Pere Crespo and Lea Sitjá left 63% of the participants out of time last Saturday in the first test of the Gregorio Delgado Memorial Trophy that is held under the organization of the Club Natació Badalona. The three skippers were escaping and a drop in the wind at the stern caused the ‘debacle’.

After several weeks of inactivity at the Club Natació Badalona due to the strong storms, as well as their effects that ended up leaving the entrance to the basement where the skates of said entity are kept completely inaccessible, the competitions were resumed last weekend. The reactivation was carried out with the start of the Gregorio Delgado Memorial Trophy, with a test on Saturday and the next on Sunday.

Only eight sailors took part in Saturday’s test. However, the result of the same constituted a certain setback for up to 63% of the participating fleet. And it is that, with Pere Crespo in the lead, followed by Pau Gratacos and Lea Sitjà, on the run the wind dropped completely. The disappearance of the wind affected the peloton in the first instance, while the three boats that were in the lead were the last affected by this phenomenon, which increased their advantage.

In any case, despite the fact that Pere Crespo had managed to keep his followers under control, that drop in the wind also ended up affecting the leading group. Later, a very light breeze came from the left side and this caused Pau Gratacós to take command of the fleet. In the end, Gratacós would be the first to cross the finish line, while Crespo came second and Sitjà third.

The remaining five ships were out of time.

The next day, participation increased to 18 sailors. On this occasion the winner of the heat was Albert Batllería, while êco Mulet entered second and Joaquim Roig did so in third place.

The first second category skipper was Gregori Contreras who came in sixth overall.

After the first two races played, Albert Batlleriá leads the provisional classification with 10 points, tied with Pau gratacós, with the same score. The third position is for JHordi Cunill, with 14 points.

PROVISIONAL CLASSIFICATION of the Gregorio Delgado Memorial Trophy organized by the Club Natació Badalona during the month of April.

Presidential elections in France 2022: The extreme right, at the gates of the Elysee

Sat Apr 16 , 2022
Le Pen and Macron in the 2017 campaign. / Agencies If the second round of the presidential elections were held today in France, Macron would win Le Pen by 53% to 47% of the vote, according to the latest Harris Institute poll. The extreme right has never been so close […] 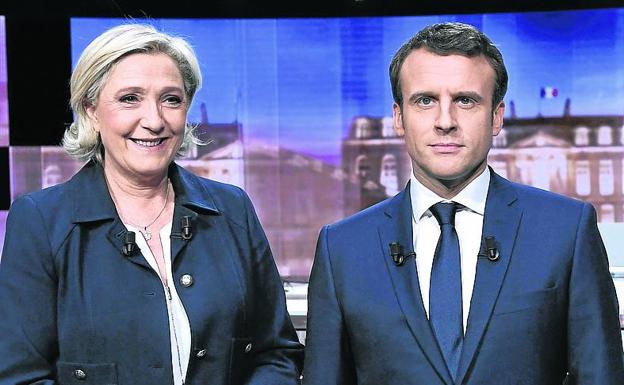