That was how categorical the Executive Director of ACERA, Ana Lía Rojas, was when referring to a possible erosion of social cohesion that puts the energy transition at risk during the annual meeting of the Chilean renewable energy association.

Santiago de Chile.- under the motto “Now is when”a call to action in the face of the climate emergency we are experiencing, the Chilean Association of Renewable Energies and Storage, ACERA AG., held its 2022 Annual Meeting, also returning to face-to-face meetings, this time at the Gabriela Mistral Cultural Center, GAM, with the assistance of some 200 people from the public and private sectors, academia, and civil society; and with the simultaneous transmission in streaming mode on various digital platforms, opening for the first time this meeting that has a theme of interest to all citizens.

In his opening speech, the executive director of ACERA, Ana Lía Rojas, began by emphasizing the setbacks in current climate commitments and the main global risks, most associated with environmental factors, which are seriously threatening our energy transition process “What is Chile planning in this context, to face a decade of economic changes , social and environmental? ACERA’s approach is that this is a joint task, which requires a governance and institutional framework for the energy transition that does not exist today, but that cannot take 10 or 5 years to define or implement. So now is the time. In Chile, the environmental risks and the strengthening of the governance of the energy transition must be considered to avoid the erosion of social cohesion”, she stressed.

He added that we already have the necessary information and diagnoses so that the defossilization scenarios occur in due time and form. In this regard, he summarized the results of the recent trajectory study for carbon neutrality of the electricity sector carried out by ACERA in 2021, which indicated results for scenarios of total withdrawal of coal-fired plants by 2025 and 2030, and in both, without the enabling conditions adequate, regulatory, technical and social, it would not be possible to build certain technologies necessary to reach the goal, such as more concentrated solar power or geothermal plants.

“We have not taken charge of the risk of not having adequate institutions for the energy transition. In what part of the territory and with what agreement of institutions and citizens are we going to deploy the 22.5 GW of renewables and storage by 2030 to make it possible to remove coal from the matrix; or what territorial planning we have today to determine where the 29,000 million dollars of investment that only generation requires to transform our matrix should be deployed”, added Ana Lía Rojas, complementing that this coordination will no longer be only a responsibility of the Ministries of Energy or the Environment, or their related organizations “but it is a vision of the country equivalent to when Chile decided on the Industrialization Policy or the General Education Law: it is a final social agreement that is based on science and the economic, but a social agreement after all”, emphasized the executive director of ACERA.

Subsequently, an interesting panel discussion entitled “Fair, inclusive and sustainable energy for all” was opened, with the participation of the Minister of the Environment, Maisa Rojas, the Minister of Energy, Claudio Huepe (connected telematically), Ana Lía Rojas herself, and the leadership and moderation of the journalist Paloma Ávila, focusing on the axes and collaborative work necessary to achieve goals such as decarbonization and achieving net zero emissions.

“In the case of Chile, this commitment to carbon neutrality is seen more as a benefit than as a cost, not having fossil fuels in the country suddenly became a blessing, because it has allowed us to accelerate innovation in a sector key” highlighted for his part, the Minister of the Environment, Maisa Rojas, referring to the goal of achieving greenhouse gas neutrality by 2050, within the framework of the Paris Agreement in 2020. And he added, “we have a law (Framework Law on Climate Change) that will allow us to work in a binding manner. In two more years, the Ministry of Energy must have a mitigation plan (to reduce emissions), “stressed the Minister Rojas.

Also, the Minister Claudio Huepe emphasized the work of the ministry. “In the Ministry of Energy we have already started planning work for decarbonization, that is, for the exit of coal. We are beginning to work with the ideas of the just transition tables, to see how we go from the current situation to the future situation, ”he said.

Was the past president of ACERA, José Ignacio Escobar, the one in charge of concluding the first block of the event. “To achieve the closure of thermoelectric plants, it is essential that we work to promote other forms of renewable energy beyond photovoltaic and wind power. Without a doubt, concentrating solar power, geothermal, biomass and storage systems in all their forms – pumped, batteries and hydrogen to name a few – require a new push,” he said.

“As of May this year, we already have more than 12GW of installed renewable power. More than 10 times what we had in 2013. In addition, we have long since left behind that 10% share, we exceeded 20% five years before the date set by law and we are currently over 35% of non-renewable electricity generation. conventional”, added Escobar, emphasizing that, despite the successes, the challenges of the sector continue to be of great magnitude and complexity.

The day ended with a conference by Mark Jacobson. “The energy transition is accessible, safe, saves us money, saves us in terms of health and has benefits for our environment (…) The social costs of executing decarbonization are much lower than continuing the line we have today,” commented the expert in energy and climate change at Stanford University.

Sun May 8 , 2022
Th Monday Battle, the initiative that moves boxing evenings to the theater, celebrates its third edition this Monday, May 9, at the Lope de Vega theater in Madrid. An evening that seeks to show boxing in a totally new way. (6-5-2022). The boxing evening The Monday Battle is gaining more […] 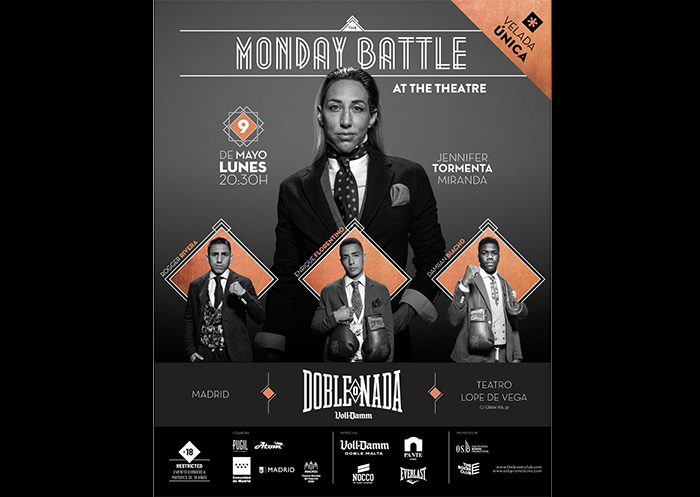