Go Fit has received the FITcert.eu certification for fitness clubs at the FIBO fair

(8-4-2022) Go Fit has become the first Spanish gym chain to obtain the Fitcert.eu certification, a new accreditation that recognizes the company’s quality standards, and is endorsed by EuropeActive.

EuropeActive has recognized Go Fit with the FITcert.eu certification, a new certificate with which the organization seeks to raise the quality of European fitness in accordance with the new CEN standards. EuropeActive has promoted it in cooperation with the National Organization for Standardization of the Netherlands.

These standards are known as EN17229, and have now been transformed into a certification scheme that has been overseen by the Netherlands National Standards Organization (NEN) and independent certification bodies.

The certification consists of 5 stages that have been developed by technical experts in certification under the direction of the CEN of the European Organization for Standards, and covers the areas of operations, administration, customer service, supervision and qualification of fitness trainers. The first two stages are operated directly by EuropeActive.

With this certification, Go fit highlights its ambition to offer an operating system capable of offering its customers the tools to achieve a fuller, happier and more capable life, also doing so in optimal facilities for it and in line with the latest industry trends.

Go Fit has received the FITcert.eu certification for fitness clubs at the Fibo fair, which this week has regained its presence after two years of pause due to the pandemic. In this way, it became the first chain of gyms in Spain to obtain this important certification. Thus, it maintains its focus on continuing to grow and betting on science and technology so that its clients continue to gain extraordinary capabilities.

The EuropeActive team is fully committed to consulting and working with the various stakeholders mentioned above, including other NGOs promoting health-enhancing physical activity, industry media, and scientific and research institutions.

Sat Apr 9 , 2022
Donald Trump Jr. speaks during the first day of the Republican convention in Washington in 2020. / AFP In the text message, published by CNN, the eldest son of the former president proposes to file lawsuits for the recount of the votes in the undecided states EP Saturday, 9 April […] 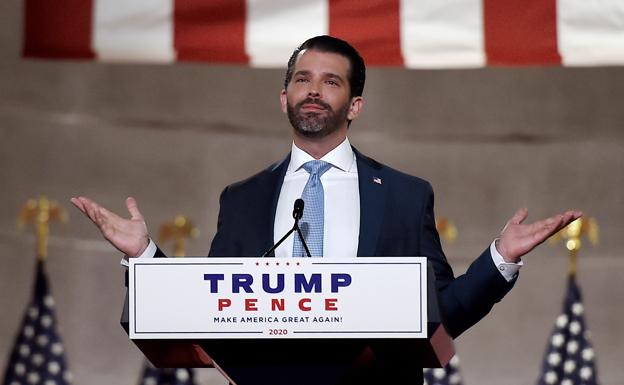