(4-16-2022). If yesterday was an example of ‘Badalona Power’ with the victory of Adrià Gabarró and Peco Mulet, from Club Natació Badalona, ​​today’s victory went to sailors from the Garraf region. Julián Vinué, from Club Nàutic Sitges, won the first, and Jordi Aránega, from Club Marítim Cubelles, won the second.

This third day of the 2022 Spanish Senior Sailing Skate Championship that takes place in Formentera has registered victories of challenger leaders. And it is that, both the winner of the first race of the day, Julián Vinué, from Club Nàutic Sitges, and the winner of the second, Jordi Aránega, from Club Martítim Cubelles, although they appeared on the list of favorites to win in this edition , are two skippers that have not yet registered their name in the list of winners of the state title.

The two sailors have dominated the test they have won from start to finish and they have done so, despite the constant siege of their rivals. But both Vinué and Aránega are two sailors accustomed to commanding fleets and today they have shown once again that they are not afraid of the pressure of literally feeling the bows of their opponents on their necks.

Today has been one of those days that, in a way, create a hobby. Sunny day, with a temperature of about 20-22 degrees. The pity is that the wind has been slow to arrive and the sailors have had to wait about an hour for a southwesterly wind of about 6-7 knots to arrive. In the first leg, the favorable tack on the first beat was the one on the left, although the bulk of the fleet chose to go to the right.

The positions have been maintained throughout the first pitch, but in the second Oriol Castellá has overtaken Jordi Servat, as well as Jordi Maré, placing fourth.

Julián Vinué has managed to remain the leader of the fleet during the rest of the route, while José María Alarcón Medina and Yannick Márquez, also maintained their respective second and third positions, during the second beat, in which there was a change of buoy from upwind to have rolled to the left. Also during the stern, the aforementioned positions have been maintained, with Oriol Castellá, fourth, and Jordi Maré, fifth, although the latter has begun to notice the siege of Lea Sitjà, of the Badalona Swimming Club, who came very eagerly from behind , located in sixth position.

As on the second beat, the leading group once again opted for the right-hand side on the third beat. Both Vinué and Medina notably extended that tack and when they both tacked, so did Márquez and Oriol Castellá in order to close the gap. That climb towards the finish line was exciting, because if the wind shifted to the right, especially Medina could end up paying dearly for his layline pass.

Julián Vinué was the first to cross the finish line. However, behind him there have been changes, especially as a result of a slight role to the right that has given wings to Castellá and Márquez. The most relevant change has been the one carried out by Oriol Castellá who, after going fourth for a good part of the race, has been the second to cross the finish line, while Yannick Márquez has done so in third place. Andalusian Medina, however, has paid dearly for his layline pass and on that beat he has lost two positions, finally entering fourth.

A similar experience has been experienced by Jordi Maré, whom Lea Sitjà has also ended up beating just at the finish line, thanks to having cut before reaching the layline and benefiting from the aforementioned slight role to the right. Sitjà has been fifth, while Maré has entered sixth.

ARÁNEGA IS IN CHARGE IN THE SECOND SLIDE

With a little more wind than in the first, the second sleeve has been developed with a wind also from the southwest. The favorable tack has once again been the one on the left and Aránega, who in the first had gone to the right and this has meant recording his worst result in the championship, has opted for that tack on the left and has been the first to pass the buoy on the first beat. Pau Gratacós passed behind him, Oriol Castellá passed second and third.

While Jordi Aránega managed his advantage successfully during the rest of the route, behind him Gratacós and Castellá engaged in a very exciting battle in which, now Castellá was second and now Gratacós was second.

Behind him, Peco Mulet was gaining ground, who like Aránega, also recorded his worst result of the championship in today’s first race. Peco Mulet would later say on the ground that “I was about to retire in the second race, because at the start I had problems and I already saw myself totally without options”. However, the ‘Genebró’ boss has finally ruled out his withdrawal and has chosen to concentrate and move on. His tenacity has allowed him to, despite passing the first beat in tenth position, from that moment on, he has begun to recover positions and has managed to be among the top five.

The last beat has been almost a heart attack. Oriol Castellá continued with his struggle with Gratacós, but gradually, he was getting closer and closer to the leader, Jordi Aránega. The five-time champion of Spain has been extremely inspired today and has been able to get good performance out of his boat and the Quantum sail that he was carrying today. With a certain sarcasm, he would later say on land, “and now it will turn out that I am a ‘ventolinero'”…

But according to the events, everything seems to indicate that Castellá today has lived his particular glorious day. Despite not winning any of the heats, in the second heat he was about to dethrone the leader of the entire race, Jordi Aránega, at the finish line. The entrance of both has barely been with two seconds of difference. Aránega, from Club Marítim Cubelles, entered first and Castellá, from Club Vela Sant Antoni, second, while third place went to Peco Mulet, from Club Natació Badalona, ​​who found himself again and that, as noted, when start of the sleeve, had considered the option of retiring “because today is not my day, today I’m jinxed”.

The fourth to enter was Pau Gratacós, from Club Mar i Vent Canet de Mar; the fifth, Adrià Gabarró, from Club Natació Badalona; and the sixth Anna Pujol, who has gotten even with the discreet result of the first test of the day, but has shown that the ‘Lady of the Vol de Nit’ is a very careful rival, even when she hardly sleeps. Not surprisingly, Pujol was last night in an unavoidable commitment that was held in Barcelona, ​​he slept just three hours in Pineda de Mar, and this morning he took a plane and returned to Formentera to compete in the championship, ready to fight with tooth and nail for a good result as usual.

TIE IN THE ‘SUMMIT’

After the four races already played and the consequent discarding of the worst result, two skaters lead the 2022 Spanish senior sailing skate championship tied with six points. They are Jordi Aránega, from the Club Marítim Cubelles; and Peco Mulet, from the Badalona Swimming Club.

After both, third place goes to Julián Vinué, from Club Nàutic Sitges, with 8 points. Fourth place goes to Adrià Gabarró, while fifth goes to Oriol Castellá and sixth to Quim Esteba. Despite having won the runner-up position in Spain last year, Jordi Aránega and Julián Vinué are the only sailors in the top-6 who have never won the Spanish Championship so far.

In the absence of the two tests scheduled for tomorrow, the state title for this 2022 is completely up in the air. The fact that a maximum of six tests can be held means that there will only be one discard, something that implies that all the contenders to win this year’s championship tomorrow will have to be very fine.

The first three already have a discreet result, which pushes them not to puncture tomorrow to get rid of that ‘bad’ result.

As for the second, Gottfried Schuon, from the Badalona Swimming Club, revalidates today, for the second consecutive day, his condition as provisional leader of said category, positioned in twenty-eighth place in the provisional general classification. Second in second place is Gianni Ruggiero, from Club Marítim Sa Tuna (in 33rd place overall) and third is Andalusian José María Alarcón Conradi, from Club Náutico de Sevilla (in 34th). 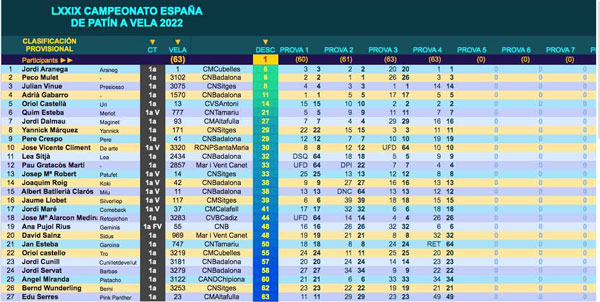 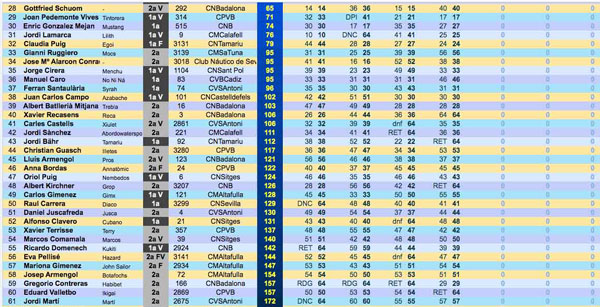 Sun Apr 17 , 2022
A Ukrainian soldier, with an anti-tank launcher. / AFP Ukraine incentivizes its soldiers on the front lines while Russia pays mercenaries five times more than its regular troops Risking life is part of the job for those who choose to enlist in any army in the world. One more job […] 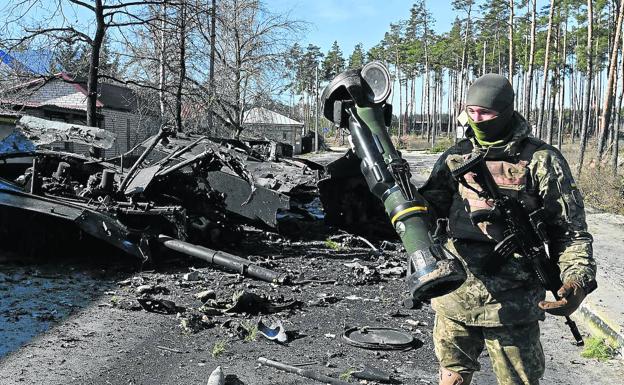