21 YEARS OF RIDE. Fútbol Emotion began its journey as an exclusively online operator in 2001. Twenty-one years later, the chain has a powerful e-commerce in many languages, as well as 18 offline stores in Spain and two in Portugal.

(16-3-2022). In 2021, Fútbol Emotion registered a turnover of 33.5 million euros, which meant breaking a record, not only in sales figures, but also in profits. For this 2022, the Spanish chain intends to “continue to grow in double digits”.

Satisfaction in Fútbol Emotion for the results achieved in 2021. The 33.5 million euros (without VAT) registered as sales figure meant a 55% growth in relation to the 22.42 million euros in 2020, but, above all, , as highlighted by its general director and co-owner of the chain, Carlos Sánchez Broto, increase by 15% the 30.05 million euros rotated in 2019, which was, in his words, “the last normal year after the outbreak of the pandemic.”

The figure reached in 2021, according to the manager, has “represented reaching the objectives that we had set for ourselves, registering the highest turnover achieved in the history of the chain and, likewise, obtaining an Ebitda that has revealed record profits”.

Sánchez Broto has pointed out that the various divisions of the brand obtained growth, although he has highlighted Teamsports, “because, in the last three years, it has been the one with the highest growth rates and in 2021 it reached a figure of sales of 7 million euros” (without VAT). The director recalled that this division currently serves some 250 football clubs from practically all of Spain.

Last 2021 was a year, as described by the general manager of the chain, of “great dedication to the digitization of the company, as well as to all issues related to big data, aspects whose results will be seen, above all, in the long run. term”.

Last year was also used to lay the foundations for the chain’s organization chart, devoting special attention to establishing talent, “because, after the crisis caused by Covid-19, it was very important for us to maintain the experienced talent that we had, so how to attract new people, especially for the online division”.

Last 2021 also saw the online landing of Fútbol Emotion in two new international markets such as Croatia and Poland and, in parallel, the chain added its second store in Madrid, specifically a 250-square-meter establishment in the Plaza Norte shopping center in the Spanish capital. . After that, the chain currently has 18 stores in Spain and another two in Portugal (in Lisbon and Porto).

For this 2022, Carlos Sánchez Broto has indicated that the main objective of Fútbol Emotion is “to continue growing in double digits, as a result of our progression in southern Europe, as well as in the EMEA zone”. According to him, he added, “we believe that we can do it and, likewise, we believe that we must do it, since we are in a sector highly influenced by the big brands and we must continue to grow to remain among the elite of specialists”.

Asked if they are worried about the continuous customer selection policy that Adidas and Nike are carrying out in retail, the executive replied that “we are within the so-called ‘strategic accounts’ of both brands at a European level and if Adidas and Nike carry out more restrictions, we believe that Futbol Enotion will be affected much less than the rest of the retail”.

LANDING IN ALMENIA AND ‘CHATBOT’

On the other hand, recently, the chain has added a new international online landing, specifically in the German market and a couple of weeks ago it presented its ‘chatbot’, a digital tool to provide a faster and more accurate service to its customers 365 days of the year 24 hours a day.

This tool is available through whatsapp and the Spanish website of the brand. From the chain they assure that “this tool based on artificial intelligence will make our customer service better and more scalable”.

Regarding the opening of new offline stores this 2022, the manager has concluded by pointing out that “we still cannot confirm anything about it”.

A few days before the end of the first quarter of this 2022, the evolution of sales in the chain is going, according to the manager, “above the budget and growing with quite relevant percentage levels in relation to the same period of 2021”.

A neutrality plan to seek peace between Ukraine and Russia

Thu Mar 17 , 2022
Vladimir Putin, during the telematic meeting this Wednesday with his Government. / Reuters Moscow and kyiv advance in a “more realistic” negotiation that proposes a Ukraine outside NATO and without foreign bases In the third week of invasion; On the 21st day of the Russian onslaught on Ukraine, the world […] 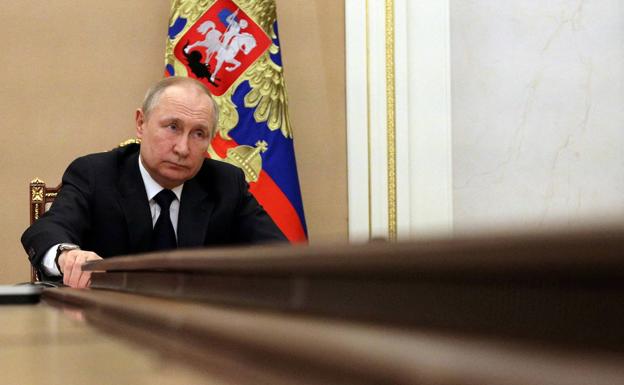