The regatta official of the 2022 Spanish Championship of skate a senior sailboat, Tete Sabater (on the right of the image with his arm extended), at the skippers meeting this morning. This is his third Spanish sailing skate championship. The precedents were that of Vilanova i la Geltrú in 2014 (with the victory of Quim Esteba) and last year in Cubelles (with the victory of Oriol Mahiques).

(4-14-2022). The first day of the 2022 Spanish Championship of senior sailing that was to start today will remain blank. The regatta committee official, Tete Sabater, announced this morning to the 63 participants that, due to the excessive prevailing wind, none of the two scheduled races will be held today.

“Let you know that today you have the day off.” This is how emphatically the regatta officer of the 2022 Spanish Senior Sailing Skate Championship, Tete Sabater, has stated at the skippers’ meeting held at eleven in the morning, which was attended by the 63 registered participants. At the moment, the prevailing wind outside the Estany d’Espeix on the island of Formentera is 23 knots sustained with gusts of 27 knots, both intensities that, according to the Adipav regulations, prohibit the holding of excessive heats.

The forecast is that both data will be maintained throughout the day, as well as that the force of the wind may also affect the second day of the championship scheduled for tomorrow… although, as Tete Sabater pointed out at the skippers’ meeting, “tomorrow you will see”. 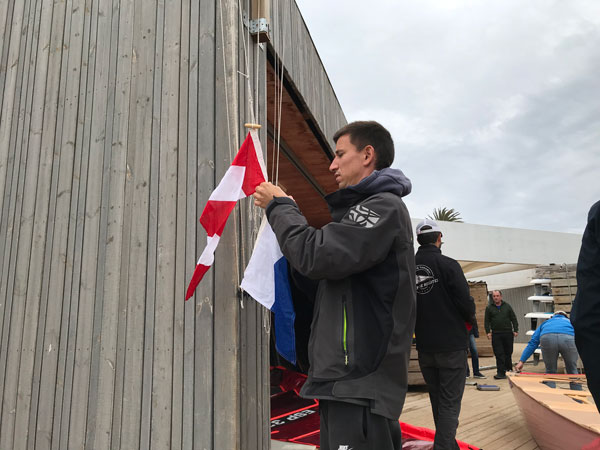 The director of the center of Activitats Nàutiques de Formentera, Alex Figueiras, preparing the flags corresponding to the information that no tests will be carried out today.

THE THREAT OF THE ‘2019 ALTAFULLA PHENOMENON’

Despite the certainty that this championship will no longer have the eight tests planned in principle by the organization, the mood of the sailors is optimistic. Practically everyone is confident that during the remaining three days of the championship several tests can be held and the so-called ‘Altafulla phenomenon’ will not be repeated, which in Easter 2019, due to the prevailing strong easterly storm, could not play any of the tests planned in that 2019 European Cup.

The scenario that the organizers of the competition have set for this edition of the 2022 Spanish sailing championship is of great beauty. However, yesterday the island’s authorities expressed their complaints to the organization of the competition due to “the lack of respect for the integrity of this protected natural environment” that some participants have shown. The president of the Adipav, Anna Pujol, as well as the coordinator of the Championship, Rafel Figuerola, made an appeal to the participants in the welcome ceremony held yesterday afternoon at the Formentera Nautical Activities Center, ‘base camp’ of the championship . Pujol and Figuerola urged the participants who had not yet done so to park trailers and vehicles in the areas provided for it, as well as to beach their boats outside the areas of dunes and vegetation on the Estany d’Espeix coastline.

All of the 63 participants in this 2022 Spanish senior sailing championship are already on the island of Formiguera.

With the exception of Valencia, there are participants from all the federations that have a skater presence: Andalusia, Catalonia, the Balearic Islands.

His presence, as well as that of other relevant skippers who have not yet entered their names in the competition’s list of winners, heralds a championship of the highest competitive level.

In this sense, numerous participants have agreed, in conversations with CMDsport, in pointing to this edition as one in which the result of the championship is more open in terms of defining the hypothetical winner. Some have argued that “making a top-10 is already a feat”, while others have increased the range by expanding the qualification to the top-20.

In the presentation of this year’s Spanish Championship held at the beginning of last March, the possibility of being able to carry out tests inside the Estany d’Espeix was pointed out if the conditions in the open sea were, as is the case today, of strong wind . Sailing skates participating in the 2022 Spanish Championship stranded in front of the Estany d’Espeix in Formentera.

However, yesterday it was found that this option is “unfeasible”, as the regatta officer, Tete Salvador, acknowledged today, explaining that the available space would hardly be enough to make a course that was half of a usual course of the class with the added inconveniences that this lack of space would force some starting lines in which, by virtue of the direction of the wind, one of its ends would allow the skippers who choose it to reach the buoy on the first beat, as well as that the short distance of that first beat would cause the overwhelmingly massive arrival of boats at that point with the consequent increase in risk for skippers and boats.

In principle, Tete Sabater has ruled out at today’s employers’ meeting that tests are planned inside said ‘pond’.

In any case, it will be necessary to see if the evolution of the intense force of the wind persists in the coming days and the holding of the championship is in danger because of it, if it will be necessary to ‘invent’ options that validate the holding of tests inside the Estany d ‘Speix. The championship must have two tests carried out to be officially valid.

Another added problem to get out of the Estany d’Espeix is ​​the reduced width of its mouth to the open sea. This width barely exceeds that of the beam of two skates and is delimited by stakes, as well as by rocks on both sides.

Its shallow depth also means that, in the event of a strong wind that forms large waves, it generates a ‘bar’ of strong waves that makes it even more difficult for boats to leave, which, even if it is in good condition, must be done in a staggered manner. because of the small width of the mouth. 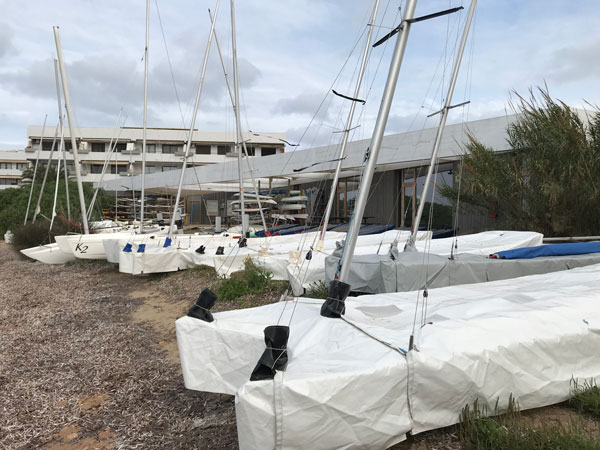 Sailing skates have ‘invaded’ the small slipway of the Center d’Activitats Nàutiques de Formentera on the occasion of the Spanish Championship that this 2022 is held for the first time in the history of the class on the island of Formentera.

Thu Apr 14 , 2022
Compartir Tweet Compartir Compartir E-mail The study aims to identify technological alternatives that are compatible with the socio-cultural identity of some communities, in addition to the costs of an eventual change and the application of appropriate policies, it will last 3 years and […]