Mario Morante and Javier Ortega promoted the startup Dudyfit in February 2020, a few weeks before the Covid19 pandemic broke out in Spain.

(11-5-2022) Dudyfit has closed an investment round of 2.5 million euros with funds such as JME Ventures, Athos Capital and Enzo Ventures, in addition to other investors such as Hugo Arévalo, Iñigo Juantegui or Andreas Mihalovits.

Dudyfit continues to grow. The Spanish startup has closed its third round of investment to continue its international expansion and maintain its leading position in the sector of applications for fitness and health professionals in the Spanish market. Dudyfit has raised two million euros from funds such as JME Ventures, Athos Capital and Enzo Ventures, in addition to other business angels such as Hugo Arévalo, Iñigo Juantegui or Andreas Mihalovits, among others.

This round is added to the two previously carried out by the company. Dudyfit was born in February 2020 and that same year he received a first injection of 170,000 euros. Subsequently, in April 2021, the startup closed a second round worth 700,000 euros from JME Ventures, as the main investor, and other ‘business angels’.

The company, which has managed to conquer the Spanish market, has been responding since February 2020 to a need for digitalization of coaches, nutritionists, sports centers, physiotherapists and other professionals in the sector.

PRESENCE IN MORE THAN 30 COUNTRIES

The Madrid startup, founded by Mario Morante and Javier Ortega, already has more than 2,500 active professionals, in more than 30 different countries. Its model is based on a platform through which fitness and health professionals can integrate all their services.

The pandemic marked a paradigm shift and even now digitalization has become an imminent necessity, as well as a business accelerator, with tools such as Dudyfit being indispensable facilitators.

“What began as a tool for personal trainers has evolved into a key player in the development of all types of fitness and health businesses. We have clients who have gone from having 4 clients to 600 in just one year, it is a real pride”, explains the co-founder and CEO of Dudyfit, Mario Morante.

With these funds, the company will continue its international expansion, with a special focus on European markets, as well as continuing to improve the product and live up to ever-higher expectations.

“We are obsessed with constantly collecting feedback, improving the product and implementing new features, we want our customers to perceive that they are part of Dudyfit’s growth,” says the co-founder and CTO of the brand, Javier Ortega.

With clients in 30 countries, the company intends to continue a path that allows them to continue revolutionizing the way fitness and health professionals work with their clients around the world.

Thu May 12 , 2022
Pekka Haavisto, Foreign Minister of Finland / EFE The decision would be announced to the organization on Sunday. AFP Thursday, May 12, 2022, 09:59 The president and prime minister of Finland said Thursday they were in favor of an accession “without delay” to NATO and indicated that the decision of […] 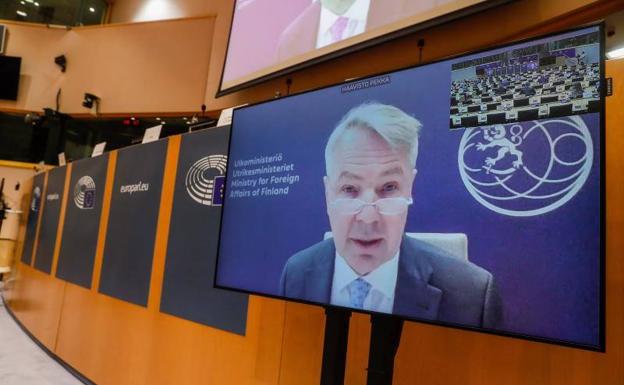