Photography has somewhat controversial beginnings that not everyone knows. Today I would like to talk to you about daguerreotype and of calotypeand the curiosities behind the invention of photography.

Although for you to understand these beginnings, I would first like to define both procedures for you.

What is a daguerreotype? Meaning

The daguerreotype It is officially the first photographic procedure to capture images. It owes its name to Louis Daguerre who developed and perfected it. In 1839 it was presented and recognized with the support of the French State.

The image is formed on a mirror-polished silver surface. For economic reasons, silver-plated copper plates were used, since only one silver face was needed, which was made photosensitive by iodine, bromine and chlorine vapors.

It was then placed in a dark chamber and exposed to light, which promoted the formation of one or two nanometer silver nanoparticles that grew to 100 nanometers during mercury development. Finally, the image was fixed by immersing the plate in an aqueous solution of thiosulfate.

It had been in use for two decades but had major drawbacks that led to it being replaced by other more agile systems.

The first daguerreotype in which living people appear, since Daguerre had previously experimented with still lifes and other views of Paris, is Boulevard du Temple. Only a motionless man can be seen in the lower left corner while his boots are being cleaned. The rest of the passers-by were not captured because the exposure time was approximately 10 minutes.

Disadvantages of the daguerreotype

The resulting images are laterally inverted. Exposure times, at least in the beginning, were too long, about 10 minutes in bright light, although this was reduced in a couple of years since its inception to times of less than 1 minute, which allowed portraits to be taken. Mercury vapors are very harmful. They are unique copies as they are negative and positive on the same plate. They are extremely fragile.

In the following video you can see a digital recreation of how the daguerreotype works.

What is the Calotype?

The calotype It is the first photographic procedure that generates a negative image that allows different subsequent prints to be made. Predecessor of modern photography, it was invented by William Henry Fox Talbot.

The calotype is based on exposing paper sensitized with silver nitrate and gallic acid to light. It is then revealed with both chemical elements and fixed with sodium hyposulfite.

It was the most widely used paper photographic procedure until 1860. 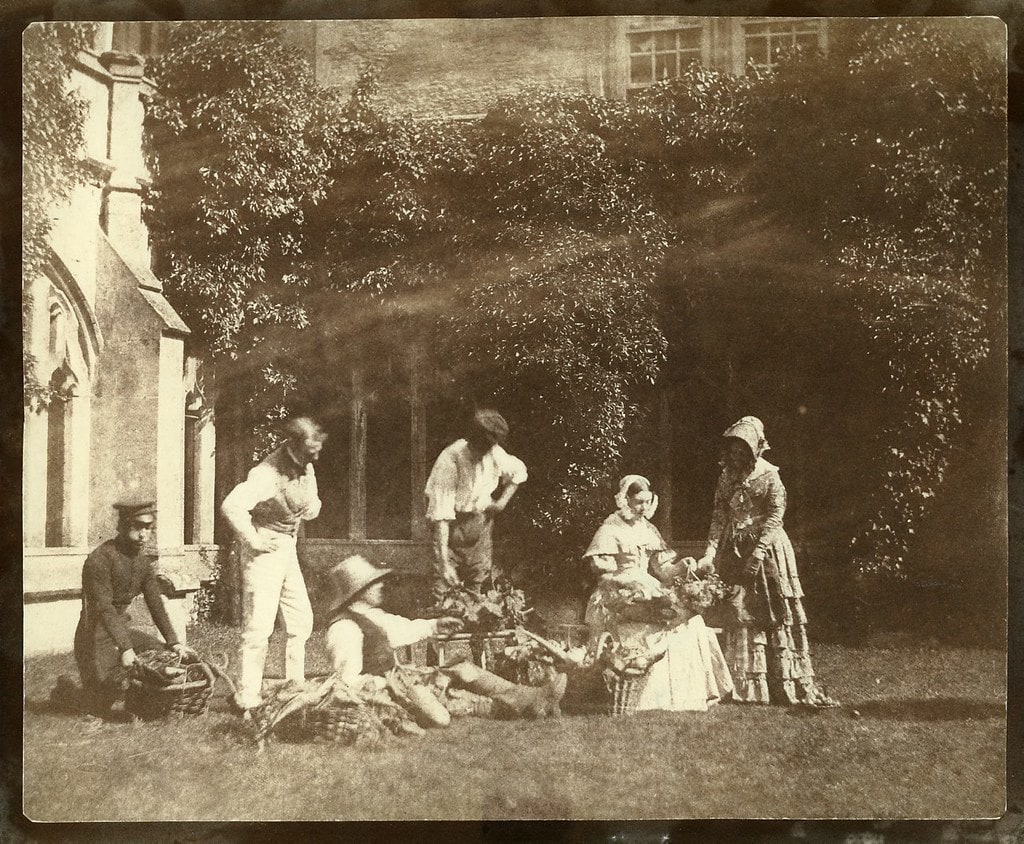 In the following video you can see the history and operation of the calotype very well summarized.

Difference Between Daguerreotype and Calotype

The main difference between both procedures is that the daguerreotype is a single image that cannot be printed to obtain new copies, while the calotype generates a negative that can be printed as many times as desired.

But there are other differences like the calotype was less sharp but cheaper and only needed 30 seconds of exposure.

Another difference was the use that was given at the time. While the daguerreotype was used more for portraiture, the calotype was used for landscape or architectural photography, often to document historic buildings.

Brief history of the invention of photography

Now that you know the daguerreotype and the calotype and their differences, we will take a brief walk through the History of photography that I had promised you, more specifically, for the story of the beginning.

To begin with, we must go back a long time and name its two main antecedents: the camera obscura and photosensitive substances.

The dark camera It is a hermetically sealed box or compartment with a hole through which an (inverted) image of the outside is projected onto the opposite wall.

The term camera obscura was coined by Johannes Kepler in 1604, however, the concept was introduced much earlier. He was an Arab scholar born in Basra in 1965 and named Alhacén.

From these dark cameras comes the name we currently use for cameras.

On the other hand, already in the s. In the 16th century, silver salts and their photosensitive properties were experimented with while the camera obscura became a portable wooden box, something much more similar to what would be used later in the invention of photography. The only thing missing was for the image to remain fixed.

It was already in the s. XIX when several contemporaries worked simultaneously on experiments to fix the image. This is when Joseph Nicéphore Niépce, who obtained the first photographic images, Hippolyte Bayard, Louis Daguerre or William Henry Fox Talbot enter the scene. But let’s go step by step.

On the one hand, niepce He achieved the first photographic images around 1924. These images are known from the letters he sent to his brother but they are not preserved because they were negatives and most of the inventors of the time were looking for positives. 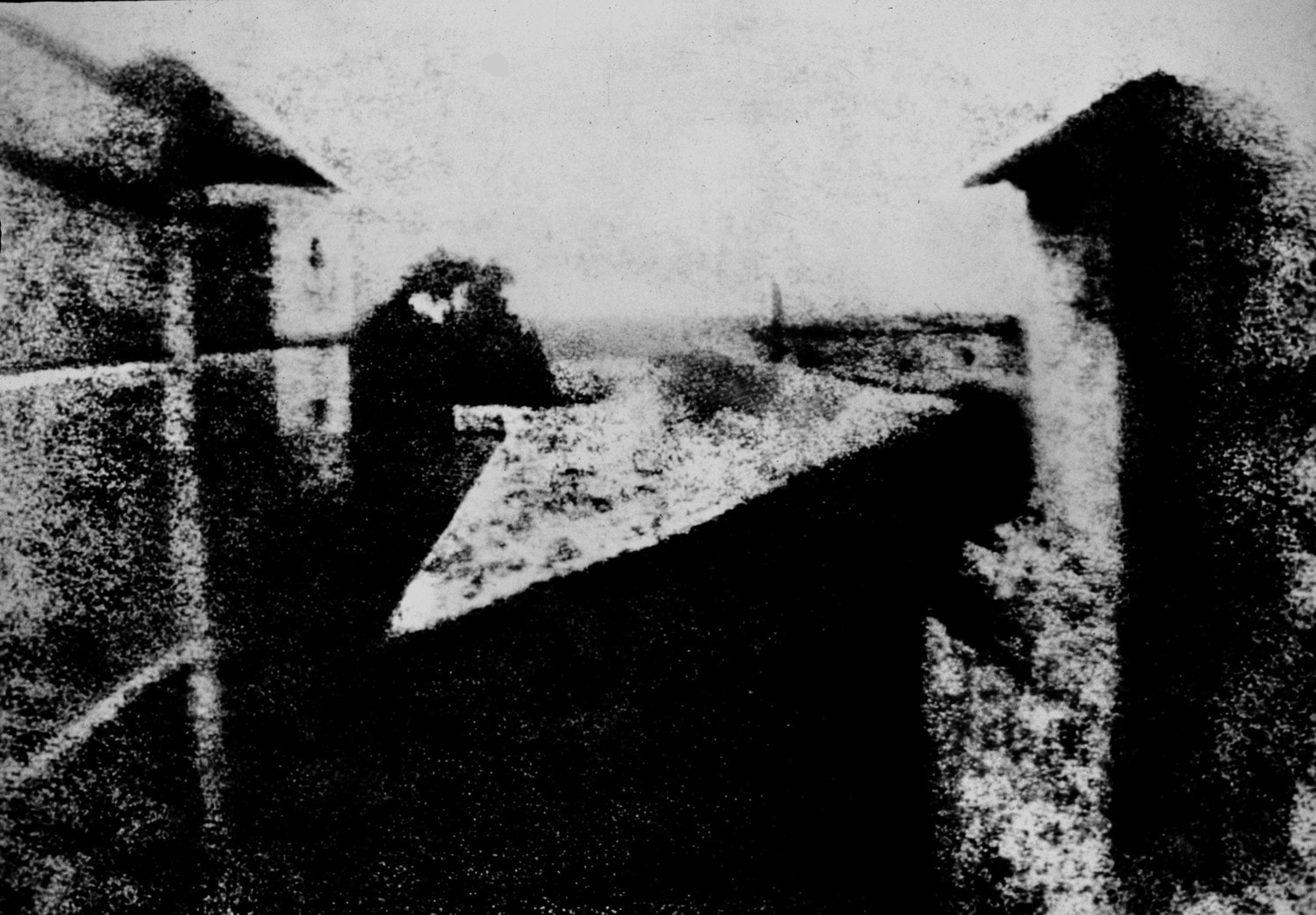 View from the Window at Le Gras, 1926, Joseph Nicéphore Niépce

In 1927, he obtained positive images with the procedure he called blueprint. This consisted of images obtained after a long exposure time on a silver plate with bitumen from Judea.

At that time, at Daguerre News of these experiments reached him and he insisted that he tell him about the procedure. After various attempts, Daguerre managed to sign an association agreement with Niépce in 1829.

Upon Niépce’s death, Daguerre improved the procedure by introducing the use of silver salts, going from needing 8 hours of exposure in broad daylight to about 10 minutes being sufficient. what was called daguerreotype.

In 1939 the French State helped him make this invention public, thus officially inventing photography. However, Louis Daguerre hid all the contribution of his colleague Niépce taking all the limelight. Something that was not clarified until a couple of years later with the publication of the work History of the discovery of the invention called daguerreotype.

At the same time, Talbot had been developing the calotype or talbotype, after having experimented with what he called photogenic drawings. In 1834 he already obtained the first results and in 1935 he obtained what is considered the first preserved negative in history, of a latticework in his house. In addition to being considered the second oldest photograph.

Talbot patented the calotype in 1841 thus becoming one of the pioneers of photography, but since these images were less sharp and darker than the daguerreotype, and also had a patent, they were less popular than Daguerre’s invention.

For his part, the also French Hippolyte Bayard In 1837 he invented the photographic procedure known as direct positive, more in the style of the daguerreotype, using the camera obscura and paper. He called the images obtained photogenic drawings, just as Talbot had done but with a very different procedure.

Before the daguerreotype became public, the French had achieved photographic images that were characterized by greater contrast between black and white than the daguerreotype (and therefore less detail due to the absence of gray).

Bayard tried to get the French government to support his project as had happened with the daguerreotype, however, instead of support he found something more like a boycott so that he would not cast a shadow over Daguerre with his discoveries. Disappointed, he abandoned his research and his contributions to photography went in other directions. But as a protest, in 1840, the first self-portrait in history was made in which he pretended to be dead: “Self-portrait of a drowned man”. So we owe him the first selfie ;).

After all these controversies, in the 1850s, Frederick Scott Archer and Gustave Le Gray entered the scene with wet collodion, a procedure that reduced the exposure time to a few seconds with its consequent reduction in costs. This new discovery, which was called ambrotypeended up displacing the daguerreotype and the calotype.

In 1878, Charles E. Bennett introduced gelatin-bromide dry plates that made it possible to print many copies on paper; and in 1888 arrives Kodak democratizing photography by patenting his camera with rolls of film and causing a true social revolution.

When was color photography invented?

Although in the s. XIX experimented with it, it is not until 1903 when the first color photographic plate appears (Autochrome), patented by the Lumière brothers. Actually, it was not commercialized until 1907.

During the s. XIX and early XX what was done was to color the photographs by hand with oil, watercolors or other pigments, something that was more artistic than photographic. Colorized photograph circa 1860 by Kusakabe Kimbei

The first color film of the modern era came in 1935, Kodak’s Kodakchrome slides, which were discontinued in 2009. All other modern film was based on color technology. agfacolor from 1936.

And so far this walk through the invention of photography, I hope you have found it interesting. If so, feel free to share it.

Wed Apr 13 , 2022
Several people injured after the shooting. /REUTERS | Video: EP The assailant released a canister of smoke and began shooting at the travelers, for no known reason, before fleeing An intense police operation was searching last night – Spanish time – for a suspect in the shooting recorded in a […]